The Electric Cooperatives of Arkansas have sponsored the Arkansas Rural Education Association’s Teachers of the Year awards since 2004. (That’s 18 years – thank you, math teachers!)

Nominations are vetted by the state’s 15 educational cooperatives, which submit finalists to the association
for consideration; a panel selects two winners.

Owens and Neel received crystal apple awards and checks for $1,000 from the Electric Cooperatives of Arkansas.

And both received a visit during the first month of school from Arkansas Living magazine. 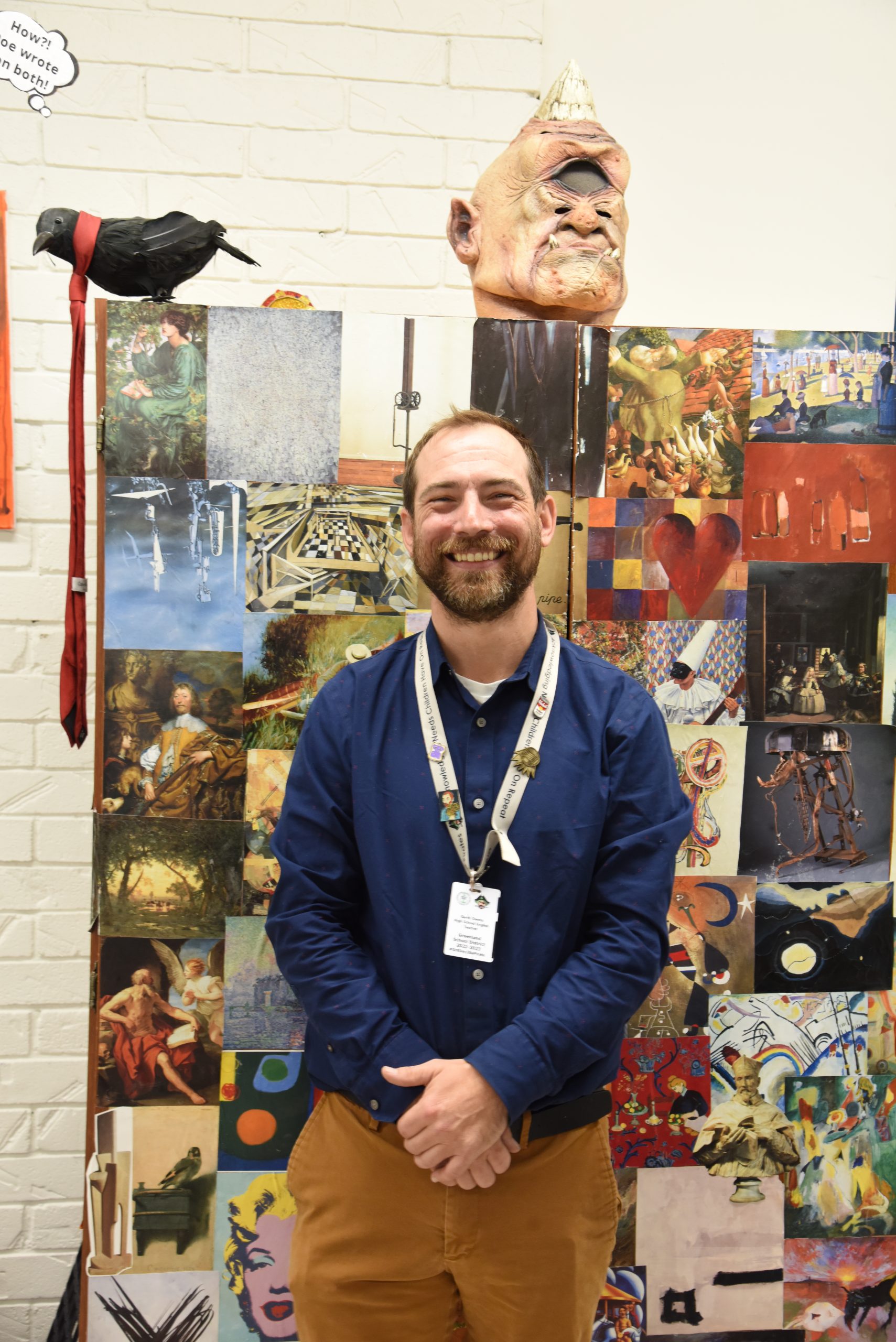 Greenland High School English teacher Garth Owens — pictured without his stilts — was selected as a Teacher of the Year by the Arkansas Rural Education Association. Photo by Jennifer Christman Cia

With a guitar case and a framed photo of Woody Guthrie in the front of his Greenland High School classroom, one might guess that Garth Owens is a music teacher.

He actually teaches English. But after school, he puts the books down and turns the volume up with members of the Jam Club, which he founded last year as a “passion project.”

“Two days after school from 3:30 to 5 p.m., students come, and they basically have the garage band they can’t have,” he says. “Most of our students live in very rural areas. If they had a garage, they couldn’t get their friends there to play. I wanted them to have that opportunity. So, they come, and we pick some songs, and we jam.”

Owens’ playing doesn’t stop at playing guitar. At Greenland Pirates games and events, Owens, a stilt walker, moonlights as the unofficial mascot, Capt. Brownbeard Long Pants. It’s an ability with practical uses, as he writes in his teacher of the year application: “I have used this skill to raise money for the drama club, for the sophomore and junior classes, as well as change lightbulbs and put up posters for my colleagues.”

Owens, who is from Louisiana, moved to Arkansas during high school before attending and graduating from Louisiana State University-Shreveport. He has taught for 15 years, including four at Greenland.

The multifaceted, musical, stilt-walking Owens — who also is into kayaking, soccer and countless activities — considered everything from boxing coach to physics teacher as potential careers. Ultimately, he chose to teach English, which allows him to incorporate other interests. He says, “Through English literature, I get to be every type of teacher.”

As for teaching, Owens says, “I love being in the classroom.” It’s clear by the way he animatedly darts around the room, engaging students in dialogue and laughter on a Thursday morning. “That warms my heart,” he’ll say enthusiastically when a student responds with a particularly passionate or well-reasoned thought.

Owens says, “What I really teach is critical thinking and communication. I just happen to use literature as my means.”

By doing so, Owens aspires to be like his teacher Jim Owen (no relation) was to him.

“I had great teachers — I know every teacher says that,” Owens says on being inspired to become an educator. To this day, Owens begins each class as Jim Owen did with this enthusiastic greeting: “Good morning, my wards, my lambs!” 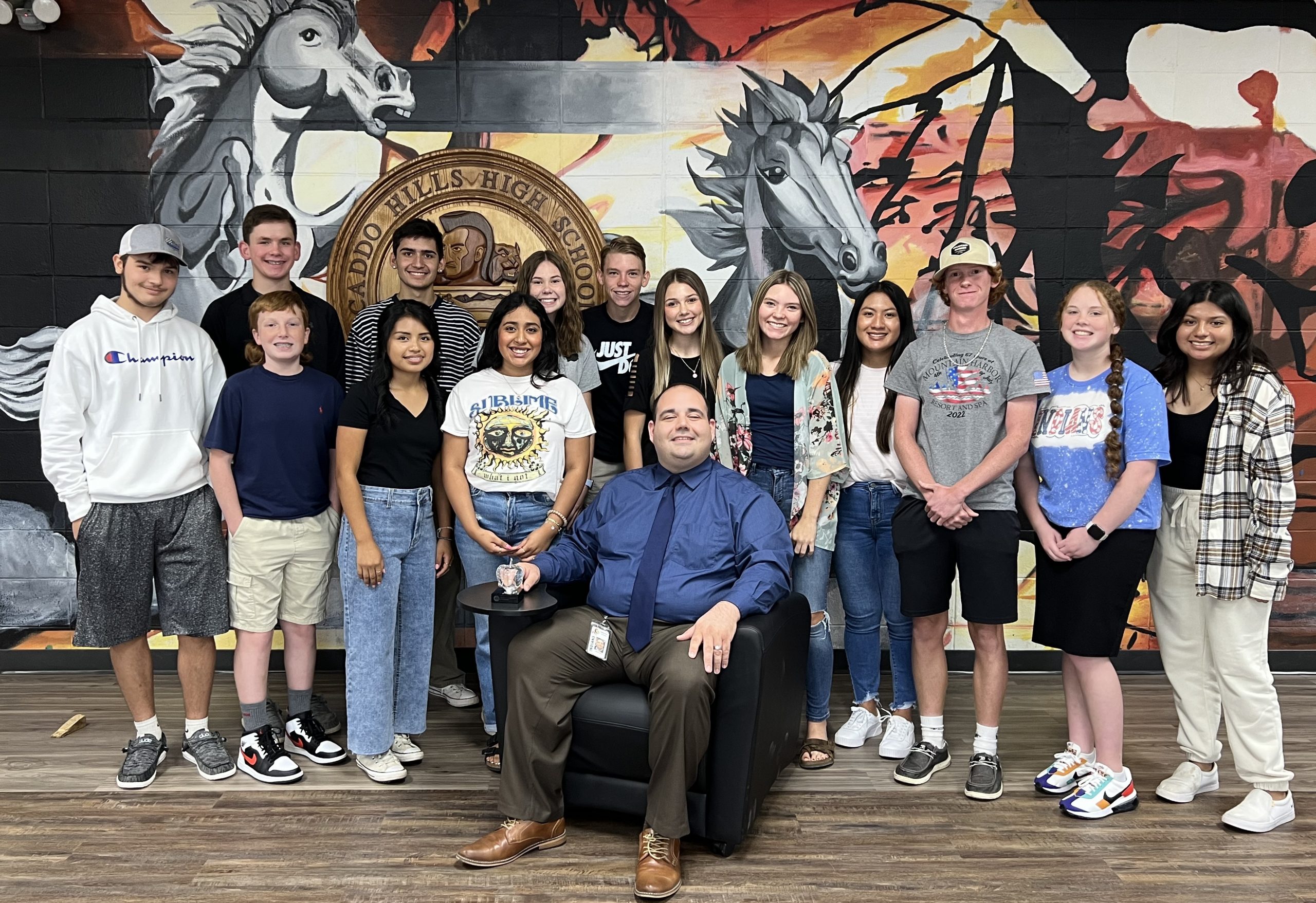 This Teacher of the Year is no longer a teacher.

As of this school year, Justin Neel, formerly a business teacher at Caddo Hills High School, is now principal of the newly rebranded Caddo Academy, which recently became a charter school.

“We are the state’s first entrepreneurship/community-leadership focused high school. And so, grades seven through 12 are housed inside Caddo Hills High School, but we are the Caddo Academy. … Our motto here is we’re trying to get these students life-ready, because whether (they pursue) college or a career, we know that they’ll all enter life once they graduate.”

Neel, who was raised in Hope, attended school in Arkansas, Japan and South Carolina. He graduated from Henderson State University, where he studied business and technology education.

“I got a job about two weeks before I graduated in a post-closing department of a title company in Arkadelphia, he says. “It was a great job with wonderful people. About a week in, I realized it wasn’t for me. I was just miserable.”

Education was a better fit. He took a teaching job at Caddo Hills and never looked back.

“I loved it,” he says. “I never felt like I was ever coming into work. I love the kids.”

After eight years in the classroom, how does it feel being in the principal’s office?

“I’ve had to apologize to the superintendent and to our former principal,” Neel says with a laugh. “I’ve gone to both of them several times. I’ve told them, ‘I’m so sorry for all the times I asked if you had a few minutes. You never did, and you always made time. And I really appreciate that now.’ I really didn’t understand all the complexities.”

To prepare students for their future career paths, the school has adopted the “Leader in Me” curriculum by FranklinCovey, which includes principles like those from Stephen Covey’s book, “The 7 Habits of Highly Effective People.” The high school has 12 career academies, ranging from engineering to computer science to culinary arts, and it offers a variety of entrepreneurship opportunities — like a student-run school store and catering business.

Though he’s busier and pulled in more directions than ever, Neel takes time in between classes on a Monday morning to visit with students. That he seems to know everybody by name emphasizes the value he places on relationships and connection.

“I want them to know that no matter what, Mr. Neel is always going to show up and give you all he has,” he says. “That’s what I remember about my teachers, that they really cared about me. They championed me. I hope all my students and my staff all know that I want to champion them every day.”

When he’s not at school, Neel and his wife, Heather, are associate pastors at Jesus Name Peace Tabernacle in Mount Ida.

When asked if they have children of their own, he says, “We do not. I tell everybody, I’ve got 250-plus kids.”