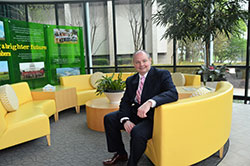 Corporation (AECC) and Arkansas Electric Cooperatives Inc. (AECI) last October, he approached his new role as he had always done — he established plans with specific goals.

The job got even bigger in March when it became clear that the coronavirus outbreak would require AECC, a wholesale power supplier to the state’s 17 electric distribution co-ops, and AECI, the co-ops’ statewide service association, to revise and implement a pandemic plan the organizations first developed several years ago.

“When you talk about critical infrastructure, electricity is the key to everything you need to have,” Hasten said, adding that the pandemic plan’s goal was to make sure the lights stay on for co-op members and keep employees safe and healthy. As part of the plan, many employees began working from home, and the companies made arrangements to sequester employees who must work on campus and at power plants, if necessary. The April board meeting was conducted via internet, and meetings with Wall Street investors took place in the AECC board room in Little Rock via Webex instead of in person in New York.

“As electric co-ops, we are used to planning for the unexpected, whether it be restoring power after a tornado or flood, or making sure we can serve our members in a pandemic,” Hasten said. “Our goal is to always provide electricity to our members in an affordable, reliable and responsible manner.”

“If you drive to all 17 cooperatives, you get to go up and down the highways a bit, you get to see our state, and you get to see the member-owners; all the folks we are supplying power to,” said Hasten, who came to AECC/AECI from Associated Electric Cooperative in Springfield, Missouri.

In addition to visiting with the leadership and staff of the electric distribution co-ops, Hasten spent much of his first 100 days meeting with AECC/AECI staff. “I needed to learn all of the processes and procedures of these really good companies,” he said.

While traveling across Arkansas, Hasten saw firsthand what he already knew — Arkansas is a primarily rural state with a strong agricultural base, similar to southeast Iowa, where Hasten was raised on a farm.

While operating a 50-acre farm in Keokuk, Iowa, Hasten’s father also delivered mail. Tending to a farm meant Hasten and the rest of his family had many chores. Soybeans were the main crop, but they also raised horses, goats, pigs, chickens, ducks and geese. In addition to school and farm chores, Hasten mowed lawns and rode many miles each day on his bike delivering newspapers. He even had his own business for a while; at the age of 12, after helping his Aunt Mary win the local garden club’s Best Flower Garden Award, he sold manure to town residents for use in their flower and vegetable gardens.

“My dad taught us to work hard and earn our own way, and to be independent because that was one his core values,” Hasten said.

After Hasten graduated from high school, he joined the U.S. Navy where he would serve 20 years, reaching the rank of lieutenant commander as an engineer in the Navy’s nuclear submarine force. After a couple of years in the service, he married his high school sweetheart, Tracy.

The discipline of the Navy was not a difficult adjustment for Hasten because of his strong work ethic, forged during his years on the family farm. He also learned the value of teamwork and service to others. He likes to share an example of those values with a story of an experience he had while serving on the USS Scranton (SSN-756) in the early 2000s.

It was 2003, and Hasten and his crew were on a mission when a crew member made a mistake that caused damage to the mast of the submarine. As they moved below the ocean, the broken mast made the Scranton sound like “blowing into a Coke bottle,” Hasten said.

“If your mission is to be super silent and quiet, you can’t do it,” Hasten said. The Scranton aborted its mission and headed for Kings Bay, Georgia, for repairs at a Naval port known for doing maintenance on ballistic submarines, the top of the Navy pecking order. The Scranton, an attack submarine, got the VIP treatment while there, something the crew wasn’t used to getting, Hasten said. In addition to fixing the mast, the repair crews did other less crucial maintenance that had been delayed. To show their appreciation, Hasten and the commanding officer of the Scranton decided to treat the maintenance servicemen.

“We had the cooks bake a coffee cake, you know, standard Navy issue with the crumbles and drizzle frosting on it,” Hasten said. It was his job to carry the freshly baked cake to the meeting. “We were in a hurry to get up there for their 9 o’clock morning production meeting, and the cake was just coming out of the oven.”

Hasten grabbed some potholders and took off with the cake while the cooks were still drizzling frosting. But the potholders could not keep the heat off of his hands, and by the time he got to the meeting, he feared he had burned them. “I dropped it on the desk of the production maintenance assistant (PMA), who was the officer in charge of maintenance, and retreated to the corner to check my hands,” he said. The Scranton’s commanding officer then took over, reading a letter of thanks to Kings Bay crew members. Hasten, whose hands were OK, began handing out souvenirs, including ballcaps and challenge coins from the Scranton, to those at the meeting. Then they went back to the submarine and sailed away.

Four years later, Hasten had decided to leave the military and look for work in the civilian world. One of the jobs he had applied for was a power plant manager position at Alliant Energy in Burlington, Iowa, an investor-owned utility located 30 miles from his hometown. During the interview process, Hasten noticed that one of the interviewers had not asked him any questions. Finally, the man spoke up. “He says, ‘I’ve just got one thing I want to say,’” Hasten recalled. “’I just want you to know that I have a Scranton ballcap.’”

Intrigued, Hasten asked how he got the cap. The man began to tell how he had been the PMA at Kings Bay when the commanding officer of the Scranton and his engineer officer visited, dropping off a cake, the caps and other souvenirs, as they thanked them for a job well done.

“He just looked at me and he says, ‘You know what, I think that guy who handed me the hat was you,’” Hasten said. “I said, ‘It was me.’ He looked at the head guy and says, ‘I have no further questions.’”

Hasten got the job and a great head start in his civilian career.

“Because of that one random act of doing something nice for somebody, it opened the door for me,” Hasten said, adding that he likes to tell the story to show that “how we treat people, how we act every day matters. And that’s how I want all of our employees to think. When we interface with our members, when we interface with other companies we do business with, how we act and how we treat people really matters.”

Hasten was enjoying a successful career at Alliant when another company, Associated Electric Cooperative, came calling. They had an opening for a plant manager and wanted Hasten to apply.

Hasten had been promoted at Alliant; moving back to a plant manager would have been a demotion. He first declined the offer, but after further persuasion, he decided to do the interview.

“Immediately in that process, I thought, ‘Wow, I really think this is cool,’” Hasten recalled. “It (the member-owned cooperative business model) is a very different way to provide electricity. It felt a lot more like this thing that was missing in my life.”

Hasten had missed the camaraderie and sense of purpose of the Navy, which he said you can’t replicate in the civilian world. But the co-op business model came close.

“Everybody is here for the member. Everybody has a mission,” he said, adding that he decided to take the job and it has proven to be one of the best decisions of his life (marrying Tracy is still No. 1).

Hasten, who also has a bachelor’s degree in electrical engineering from Auburn University and certificates from the Harvard Business School and the Stanford Graduate School of Business, moved from power plant manager to vice president of engineering and construction prior to his selection as president and CEO of AECC and AECI. In his new role, he said he will continue to focus on serving others.

“I believe in servant leadership,” Hasten said, adding that his mission is to support the AECC/AECI staff in the mission to serve the electric co-ops and their members.

Editor’s Note: In next month’s Arkansas Living, Hasten will discuss issues of importance to the electric co-ops.