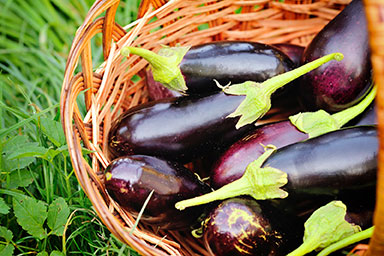 One of the heat-loving vegetables in abundance right now is the eggplant. It is believed that Thomas Jefferson introduced the eggplant, which is native to Asia, to the United States in the 1700s. But eggplants have only become common in our gardens and kitchens in the last decade. Now, the large-fruited purple varieties are a staple and available year-round in the grocery store.

Their plants, flowers and fruits make them an easy ornamental edible, as well as a good garden plant. Eggplants belong to the nightshade family, which includes tomatoes, peppers and potatoes. Unlike tomatoes, eggplants thrive in the hottest parts of summer, continuing to set fruits even on hot, humid days. They grow on a short, stalky bush, like peppers, and rarely need staking unless the plants are loaded with fruit. Some gardeners use tomato cages; others use perennial stakes. 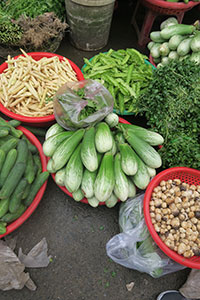 Farmers’ markets are a great place to find different varieties of eggplants. photo by Janet Carson

Most people are familiar with the larger-fruited dark purple to black varieties such as “Black Beauty” and “Dusky,” but the oriental varieties with long, tapered fruits such as “Ichiban” and “Little Fingers” are gaining ground. Most of us today are familiar with eggplant parmigiana, moussaka, ratatouille or baba ghanoush —  all eggplant dishes that are more common in our diets these days. As our palates and food culture grow, we begin to learn about new varieties.

In addition to purple-fruited varieties, there are small, egg-shaped varieties in mature shades of white, yellow and orange, along with striped and spotted ones. Some popular white varieties include “Ghostbuster” and “Casper,” with the truly egg-shaped white “Easter Egg” variety. “Fairytale” is a purple- and white-striped variety, “Brazilian Oval Orange” has a beautiful orange fruit and “Italian Pink Bicolor” is white with pink stripes. And not to be overlooked are the golf ball-sized Thai eggplants in green, white or purple. An eggplant grown more as an ornamental is “Pumpkin on a Stick,” which produces small orange pumpkin-shaped fruits born along the stems of a 3- to 4-foot-tall plant. Many farmers’ markets now carry an array of these harder-to-find varieties.

All eggplants need warm conditions to grow, so don’t plant too early in the spring. Planting in late April to early June will allow the soil temperatures to warm up. Eggplants will continue to grow, bloom and set fruit until the really cool days of fall. Eggplants like a well-drained soil with plenty of organic matter and ample nutrition. Once established, they are often more drought-tolerant than many other summer vegetables, but don’t let them get too dry or the fruits may turn bitter. The main pest problem is the flea beetle, which can cause small holes in the leaves and a stippling effect on the fruit. If the fruits grow large and are exposed to the sun, they have been known to get a sunburned spot on the fruit, turning it tan.

The flowers are self-pollinated, but bees can help with fruit set. Unlike tomato and pepper blooms, which are only good for one day, individual eggplant flowers remain open for two to three days. Because they need warm conditions to grow well and take between 50-75 days to mature from seed, most gardeners plant transplants instead of seeds. If you want to try the more unique varieties, you will need to start your own plants from seed indoors under artificial light in February to March. It takes six to eight weeks to get a quality transplant. 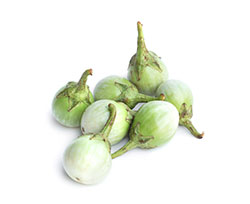 Although eggplants can be harvested from small-sized fruits up to larger ones, under-ripe or over-ripe fruits can be a bit bitter. For the larger-fruited forms, the outer rind should be deep, dark purple and have shiny skin. If the skin begins to turn dull or the color begins to fade, they are getting too ripe. The smaller-fruited forms will usually stop growing larger, and the outer skin will get glossy. Although we have all done it, try not to pull the mature fruits off by hand since they are firmly attached, and you can damage the plant. Use pruning shears to harvest and leave a short stem attached. When you cut into the fruits, a perfectly ripe fruit will have a sprinkling of soft, well-formed yet immature seeds. Fruits with no visible seeds are immature, while hard, dark seeds are found in overripe eggplants.

Eggplants will last for about a week in the refrigerator and can be grilled, fried, sautéed or roasted. If you start having too many to eat at once, roast them along with peppers, garlic and tomatoes in the oven, then puree in the blender for an outstanding dip.