In 1986, at the first King Biscuit Blues Festival in Helena, the first artist to take the stage was CeDell Davis. Accompanying him on clarinet was Little Rock native Robert Palmer, a blues producer and journalist.

Though no one knew it at the time, Palmer’s presence was a lucky break for the festival.

Bubba Sullivan, one of the founders of the annual King Biscuit Blues Festival, remains passionate about promoting the blues.

“The next thing we know, in about two or three weeks there was a big article in The New York Times about this festival,” recalls Bubba Sullivan, one of the event’s founders, in a recent interview at the festival’s office in downtown Helena-West Helena.

“We didn’t know Robert Palmer was a music critic for The New York Times, but he was. And that’s really the thing that kind of spread the word about this festival,” he says. 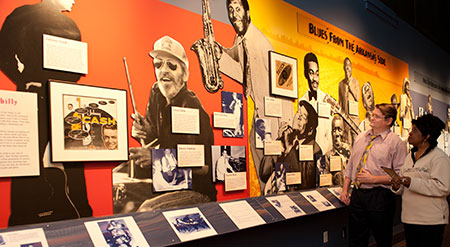 One of the most popular exhibits at the Delta Cultural Center focuses on Delta music and local musicians such as the late Levon Helm of Marvell, a member of the rock group The Band. photo courtesy of ARKANSAS DEPARTMENT OF PARKS AND TOURISM

The annual festival takes its name from the “King Biscuit Time” blues radio show that has been broadcast in Helena since 1941. In 2005, the event’s name was changed to the Arkansas Blues and Heritage Festival after lawyers in New York objected that the organizers didn’t have rights to the “King Biscuit” name, but a deal was reached to restore the name beginning with the 2011 fest.

This year’s festival, the 32nd, is set for Oct. 4-7. Tickets are $80 and allow access to a fenced-in area around the main stage, which faces a gently sloping Mississippi River levee where the audience can sit.

Sullivan says $80 is “pretty cheap to hear at least 55 bands in three days,” but he also notes that there is no charge to view performances on secondary stages, and the music from the main stage can be heard without buying a ticket.

Over the years, the event has drawn blues greats like Albert King, B.B. King, Robert Lockwood Jr. and Pinetop Perkins. The headliner for this year’s fest is Gov’t Mule. Other performers will include Paul Thorn, Tab Benoit and JJ Grey & Mofro. 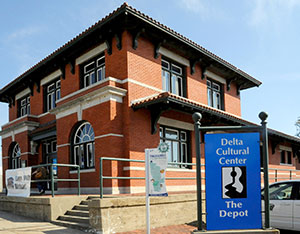 It was the popularity of the festival, which averaged about 50,000 visitors a year in its first decade, that helped Helena, now Helena-West Helena, become the home of the Delta Cultural Center (DCC), which opened in the fall of 1990 in the town’s restored 1912 train depot.

The DCC, an agency of the Department of Arkansas Heritage, interprets and preserves many different aspects of the region’s cultural heritage, from the Delta blues to the Civil War to agriculture.

It’s the museum’s unique approach to music history that has made it a destination for musicians and music lovers from around the world. Visit at the right time of day and you can not only view exhibits on blues, gospel and rockabilly genres and artists, but you can also see a live broadcast of “King Biscuit Time,” the longest-running daily radio show in American history, hosted by “Sunshine” Sonny Payne. 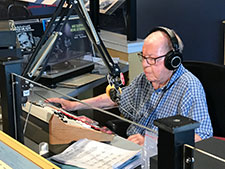 “King Biscuit Time” was first broadcast by KFFA Radio in 1941 and has been hosted by Payne since 1951. Originally a program of live music, the show now features recorded music selected and introduced by the 91-year-old Payne in a broadcast booth in the DCC’s Visitors Center. When “King Biscuit Time” debuted, Payne was working at KFFA Radio, doing things like sweeping the floor and cleaning records. Payne left for a stint in the Army in World War II — he lied about his age to enlist — and returned to KFFA in 1951, becoming the host of “King Biscuit Time” that year.

The show was a natural for Helena because of its status as a blues mecca. Located about 80 miles southwest of Memphis, Helena in the 1930s was filled with juke joints and cafes where bluesmen played all night to packed houses. Among those bluesmen were Robert Lockwood Jr. and Sonny Boy Williamson, who approached KFFA management about creating a blues show where they could perform. After securing the local Interstate Grocer Co. as sponsor, the show was named “King Biscuit Time” in honor of the company’s King Biscuit Flour. The show was a huge hit, and sales of the flour soared. Soon thereafter, Sonny Boy Cornmeal was also being sold.

By the early 1950s, the show had become hugely influential. It not only was broadcast by KFFA in Helena but also by WROX in Clarksdale, Miss., where its listeners in the 1940s included Muddy Waters and B.B. King.

As a youngster, legendary rock musician Levon Helm, who was born in 1940 to cotton-farmer parents in Phillips County, would listen to the show and sometimes go to the station to watch the band play. Drummer James “Peck” Curtis occasionally let Helm play drums on the air, and in later years Helm would cite Curtis as one of his favorite drummers.

In the 1970s, the show transitioned from live to recorded music, although Payne is still happy to let visiting musician friends play live on the air. Payne is a beloved figure among musicians who play or have been influenced by Delta blues.

“Charlie Musselwhite was here yesterday,” he says. “We’ve been friends for about 20 years.”

Does Payne miss the days when the show featured live music?

The show went off the air in the early 1980s but was revived in 1986 as part of an effort to attract blues-related tourism and highlight the region’s musical heritage. In 1992, the program began broadcasting from a restored train depot that serves as one of the Delta Cultural Center’s two museum buildings, and in 2000 the program moved to the museum’s nearby Visitors Center.

“Robert Plant’s been by, and even got interviewed by Sonny, who did not immediately know who Robert Plant was. Elvis Costello’s been in a couple times,” Jacques says. “Sonny loves having guests on the show, loves bringing fans, travelers, onto the program and asking them questions about where they’re from, what they’re doing on their trip, and what their interest in blues music is.”

“King Biscuit Time” airs live on radio station KFFA from 12:15-12:45 p.m., Monday through Friday, and is streamed on DCC’s website, deltaculturalcenter.com. The Visitors Center is closed to the public on Sundays and Mondays, although museum workers have been known to let visitors in on a Monday to see Payne host his show.

Why does Payne still host the show after all these years?

“It’s my job,” he says. In an interview with the Arkansas Department of Parks and Tourism in 1996, Payne said he continued to do the show because “it’s part of my life. Why do you eat? To live. I do it to live. No, I live to do it.”

During each year’s King Biscuit Blues Festival, the DCC also presents a free concert, the Front Porch Blues Bash, at the Miller Annex a block from the main stage. The musicians perform on an indoor stage designed to look like a front porch.

“One of the reasons that our Front Porch Blues Bash is so popular is because we tend to have what most people consider more authentic Delta blues,” says museum spokeswoman Paula Oliver.

Another annual music festival that draws crowds to Helena is the Arkansas Delta Family Gospel Fest, held in May. Among that festival’s better known past performers is Mavis Staples.

The King Biscuit Blues Festival continues to draw large crowds, in its 32nd year. photo courtesy of ARKANSAS DEPARTMENT OF PARKS AND TOURISM

The Helena-West Helena brigde on the Mississippi River.

The DCC is located in what was the city of Helena before Helena and West Helena consolidated in 2006. Helena sits just west of the Mississippi River and just east of Crowley’s Ridge. On July 4, 1863, Union forces that had occupied the city took the high ground to defend against attacking Confederate troops during the Battle of Helena.

“I would say our second biggest attraction and reason people come to Helena is because of our Civil War heritage,” Oliver says. “About 10 years or so ago, the city started what we call the Civil War Helena initiative, and that is an effort to interpret the Union occupation of Helena for four years in a more comprehensive way. It’s a unique project that’s different from a lot of other communities because we’re trying to tell the story from different perspectives.” 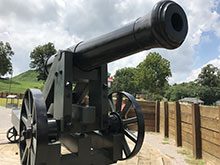 At Battery C Park, which is maintained by the DCC, visitors can stand on Crowley’s Ridge and see a reproduction of a Civil War cannon aimed in the direction from which Confederate soldiers would have charged the Union battery — though now the only thing advancing on the spot is kudzu. During the battle, fewer than 300 men armed with two cannons and firearms held the battery for several hours against 3,000 Confederates. The Confederates took the battery but ultimately lost the battle and had to retreat from the ridge.

At the south edge of town, the DCC maintains Freedom Park, where displays including interpretive panels, kiosks, life-sized silhouettes, a cannon and a bronze statue of a black soldier illustrate various ways black people in the Delta experienced the Civil War.

In downtown stands a reproduction of Fort Curtis, another museum property.

Shortly after Union forces captured the city in July 1862, engineers began working on a fortification of earth and timbers that was completed the following October by escaped slaves. It was named after the city’s first Union commander, Gen. Samuel Ryan Curtis. During the Battle of Helena, the Confederates attacked Fort Curtis after capturing Battery C, but they failed to take the heavily armed fort.

A reenactment of the Battle of Helena is planned for April 13-15, 2018, to commemorate its 155th anniversary.

The DCC also tells the story of Helena as an important river port. Steamboats began traveling the Mississippi River in the early 1800s, which further fueled the growth of Helena’s then cotton-based agriculture and the surrounding Delta region. 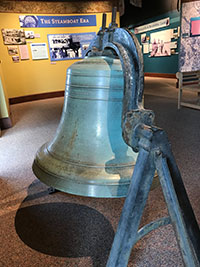 A bell that hung from the roof of The Pelican, a steamboat that ferried trains across the Mississippi River from 1902 until the late 1950’s, sits on display at the Depot.

The Depot, the Visitors Center and the Civil War sites are open to the public at no charge. The museum also maintains some properties that are open only by appointment or for special events. Across the street from Fort Curtis is the Moore-Hornor House, a two-story home built in 1859. Downtown also features Beth El Heritage Hall. Built in 1916 as Temple Beth El, the neoclassical structure with imposing Ionic columns was donated to the DCC in 2006 by the remaining members of the Jewish temple.

For more information on the DCC, visit: deltaculturalcenter.com. More information about this year’s festival, including the complete schedule and ticket information, is available at kingbiscuitfestival.com.

John Lyon is a Little Rock-based writer. Sheila Yount, Arkansas Living editor and a former travel writer for the Arkansas Department of Parks and Tourism, also contributed to this article.