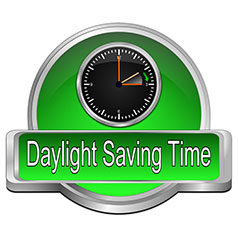 Mark you calendar to move your clocks up an hour on March 13 as Daylight Saving Time (DST) begins at 2 a.m. on that date. DST, which is designed to add an extra hour of daylight in the evenings, will end at 2 a.m., Nov. 6. U.S. Department of Transportation studies have shown that DST cuts the nation’s energy usage by about 1 percent per day because less power is needed for lighting and appliance use. 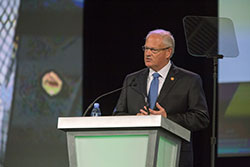 More than 6,000 representatives from electric co-ops across the nation attended the meeting on Feb. 14-17 during which they set NRECA’s legislative and organizational agenda for 2016. In addition to considering and acting upon policy resolutions, delegates received reports from NRECA officials, heard addresses by key public figures and business experts, and attended educational forums on major issues affecting electric cooperatives and their members.

In addition to the core business of providing electricity, Coleman noted that electric co-ops are working to help their communities in many other ways including developing the next generation of homegrown leaders, the development of broadband service and the integration of distributed energy resources in rural America, as well as working to build a smarter power grid.

“We are luring business to our towns,” he said. “We are making life better for our members and for the places we love.”

Coleman noted that when the electric co-ops began electrifying rural America in the Great Depression of the 1930s, the co-op leaders didn’t let their sometimes differing views get in the way. “Their economic policy was ‘we need to save this community’ and their social policy was ‘let’s do it together,’” Coleman said.

Coleman referred to a famous quote about the rural electrification movement made by a Tennessee farmer who said the “greatest thing on earth is to have the love of God in your heart, and the next greatest thing is to have electricity in your house.”

In addition to that, he shared another quote from the late comedienne Gracie Allen who said, “Never place a period where God has placed a comma.” That quote applies to the work of co-ops, Coleman said, in that “we weren’t called to make a difference in communities once-upon-a-time. We’re called to do it every day. And with the love of God in our hearts, and the power of cooperatives in our communities, we are and we will.” 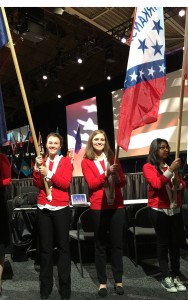 Earlier in the meeting, at the opening session on Feb. 15, members of the Youth Leadership Council took center stage during the Parade of States. Danielle Duggan of DeQueen represented Arkansas on the council and in the parade where she carried the Arkansas State Flag. She was sponsored by Southwest Arkansas Electric Cooperative based in Texarkana.

Representatives on the council are selected during the annual Electric Cooperative Youth Tour to Washington, which takes place each June. 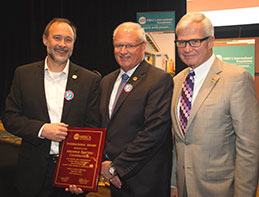 “The strong collaboration between Arkansas and Indiana co-ops resulted in the construction of eight miles of power line in the challenging mountains of Guatemala, providing power to 265 households,” said interim NRECA CEO Jeffrey Connor. “Their collective leadership has served as an inspiration and successful model for other statewide collaborations for international volunteer activities. The time and effort invested in this project is proof that the cooperative spirit is alive and strong, and that our concern for community has no boundaries.”

The International Award recognizes exceptional dedication to the development of international communities through electrification, cooperative development and global commitment. Beginning in 2013 and continuing in 2015, Arkansas electric co-ops sent linemen to help provide electricity to remote villages in Guatemala.

NRECA is the national service organization that represents the nation’s more than 900 private, not-for-profit, consumer-owned electric cooperatives, which provide service to 42 million people in 47 states including Arkansas.

The National Rural Electric Cooperative Association (NRECA) on Feb. 15 launched a major initiative to enhance voter engagement. The goal of the “Co-ops Vote” campaign is to boost voter turnout in areas served by cooperatives by encouraging electric co-op employees and their members to exercise one of their most basic rights — the right to vote.

Working in collaboration with states and local co-ops, this non-partisan campaign is designed to educate and engage all voters on important issues, such as ensuring continued access to reliable electricity, promoting co-ops’ development of innovative renewable energy solutions and expanding broadband coverage throughout rural America. For more information, visit www.vote.coop and follow #CoopsVote.