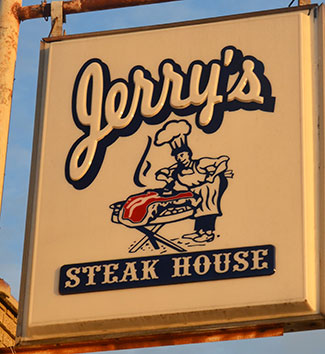 Jerry’s Steak House, known for a laid-back environment and some of the best steaks in Arkansas, is a legendary restaurant in Trumann.

I grew up in northeast Arkansas and have many, many fond memories of eating at Jerry’s in college. Especially on Thursday evenings when the Sweetheart Special was offered. During my Let’s Eat visit, I was very happy to see that the Sweetheart Special continues! A couple can order a large sirloin or ribeye steak and a small steak for a great price.

The restaurant was opened in 1981 by Jerry Pillow. According to all accounts, Jerry used a modified backyard 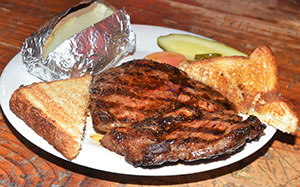 grill from Sears, sitting in what used to be a fireplace, to grill the signature steaks. He retired in 2000, and Tracy, his son, and Kellie, his daughter-in-law, assumed ownership. Under their guidance, lunch service and many sandwiches were added to the menu. The couple doubled the size of the establishment’s dining area in 2006 and added salads and desserts. The welcoming, helpful staff at Jerry’s has been great in all of my visits.

Many chain steak houses have tried to emulate the casual feel and ambiance at Jerry’s Steak House, but Jerry’s is the real deal.

Entrées come with a slice of tomato, some jalapeños, a dill pickle spear, a baked potato with butter and sour cream and a slice of grilled, buttered Texas toast. Steaks are fresh, never frozen, and hand-cut to order. Other menu options include grilled chicken, shrimp, hamburgers, steaks and sandwiches. 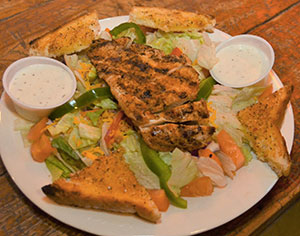 My meal began with a grilled chicken salad, featuring warm, perfectly seasoned chicken breast atop a bed of fresh greens. The flavor of the chicken and the salad was made even better with a bit of the house-made ranch dressing.

Jerry’s signature steak sandwich is a big boy made of USDA choice steak tips, grilled mushrooms, grilled onions and melted Swiss cheese on a toasted bun. Each bite was a mouthful of goodness!

I was served the grilled shrimp skewer and the fajita grilled vegetables. Just for fun, I mixed the two for a fabulous combination. The shrimp had a nice char-grilled flavor, and the veggies (bell peppers, onions and tomatoes) were yummy.

Ribeye steaks (the only Sweetheart Special offering a few decades ago) are not only big in size and flavor, they’re big sellers. I swear there must be something magical about the grill.

My favorite steak is the filet mignon, and my favorite place to get one is Jerry’s Steak House. My taste buds’ 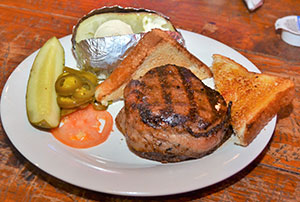 Entrées, like the bacon-wrapped filet mignon, are served with sliced tomato, jalapeños, a pickle spear, a baked potato and Texas toast at Jerry’s Steak House.

memories were not disappointed as I enjoyed a grilled, super-tender beef filet, lovingly wrapped in precious bacon. I wanted to shout, “I love you,” but I didn’t want to get any strange looks. The hand-trimmed USDA choice beef simply melted in my mouth and made me want more!

In addition to being cooked on the magic grill, each entrée is seasoned with Jerry’s secret seasoning. The exceptional seasoning is sold at the restaurant. Because I can’t get to northeast Arkansas as often as I would like, I use the seasoning on my grilled fish, chicken, steaks, pork chops and other foods. Heck, I love it on popcorn!

Make a visit to Jerry’s Steak House a bucket-list item. You can thank me afterward. Tell them Rob says, “Hey!” And don’t forget to pick up a shaker or two of seasoning. 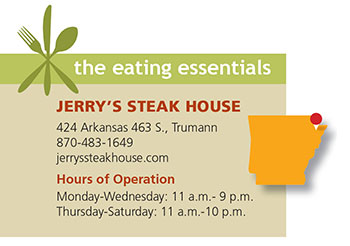