Johnny Cash is one of the world’s best-known Arkansawyers — and the festival exploring his roots in the state is establishing its own roots in his boyhood home of Dyess. 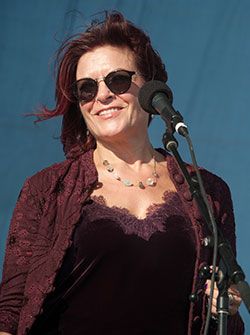 Set for Oct. 18-20, the 2018 Johnny Cash Heritage Festival (JCHF) marks the second year the festival has been held in Dyess. Jamey Johnson and Alison Krauss are this year’s headliners. John Carter Cash — Johnny and June’s only son — is host of this year’s festival. The 2017 festival, hosted by Roseanne Cash, Johnny Cash’s daughter, was the first held in Dyess. (The Cash siblings alternate hosting years.)

John Carter Cash will also perform, as will Ana Cristina Cash. The latter is new to the Cash family lineup — the 33-year-old Miami-born singer married John Carter in October 2016. Shawn Camp, a Grammy-winning singer-songwriter born in Perryville (Perry County), will also perform at Saturday’s ticketed concert, which will take place in the cotton fields adjacent to the restored Cash home. 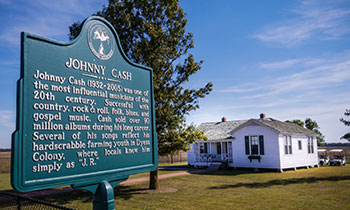 Johnny was born J.R. Cash in Kingsland (Cleveland County) in south Arkansas, and raised in Dyess (Mississippi County) in northeast Arkansas. The festival is coordinated through Arkansas State University’s (ASU) Heritage Sites and its Heritage Studies doctoral program, and is licensed through the John R. Cash Revocable Trust. Presenting sponsors include the Electric Cooperatives of Arkansas and the Judd Hill Foundation. And while the Johnny Cash Heritage Festival is new, the idea of a Cash festival in northeast Arkansas isn’t. The Dyess festival evolved from the Johnny Cash Music Festival in Jonesboro, first held in 2011 on the ASU campus.

Dr. Ruth Hawkins, director of ASU’s Heritage Sites, said Johnson and Krauss will “musically represent” Johnny and June, in a re-creation of Cash’s set lists from 50 years ago — 1968 was a watershed year for Cash. Other musicians will represent the originals from Cash’s stage show of the era — Carl Perkins, Mother Maybelle Carter and the rest. “We’re excited about this,” Hawkins said. “This will be a historic, once-in-a-lifetime event.”

The inaugural Johnny Cash Heritage Festival took place on Oct. 19-21, 2017, adjacent to the restored Johnny Cash Boyhood Home at Dyess. The heritage festival evolved from the successful music festivals that took place from 2011 to 2014 at the Convocation Center at Arkansas State University in Jonesboro. photo by Casey Crocker, Arkansas Department of Parks and Tourism

Avid Cash fans know Dyess (pronounced “Dice” by locals) was Cash’s boyhood hometown — and is also home of the emerging renovation of the historic Dyess Colony, created under the New Deal. Dyess was established in 1934 as an agrarian community set up by the U.S. government during the Great Depression. The Cash family applied after hearing about the project on the radio, and moved there in 1935 to start a new life in Mississippi County. “I grew up under socialism,” Cash later said of the time. The buildings in Dyess — and, as of May, Cash’s home — are on the National Register of Historic Places. Former Dyess residents and others with memories of the Great Depression are encouraged to contact festival organizers in advance to share their stories.

Ben Manatt is EAST (Education Advanced by Service and Technology) facilitator at Bentonville High School. Last year, his students collected stories from Dyess residents as part of a project called Memories of a Lifetime. This year, he’s presenting some of their findings at the Cash symposium, which is held concurrently with the festival. “I love seeing students connect moments in history to living, breathing people and experiences,” Manatt said of the project. Students gained technical knowledge in collecting the interviews and digitizing materials, but beyond that, Manatt said, “it helps them connect to a time and place that isn’t possible through a few pages in an Arkansas history book.”

A native of Brinkley, Manatt said taking part in the project was also personally moving, as his maternal grandparents were colony residents. Collecting such stories for the project is important historically, but also a way “to pay honor to a program that helped my family and so many more through those trying times.”

The other focus of the festival is, of course, Cash’s considerable impact on American music. Cash was an inductee of both the Rock and Roll Hall of Fame and the Country Music Hall of Fame, and his music has been able to walk the lines across genres and generations. Emblematic of his life growing up in the colony where the Cash family got a hand up, Cash used his worldwide fame to bring attention to the plight of the poor, of American prisoners, of American Indians and others “who are held back,” as described in his song “Man In Black.”

“The JCHF is like attending a homecoming event in your own community; you don’t have to be from Dyess to feel it,” said Mike Doyle. “Johnny Cash mirrors so much of the humanity of us all.” Doyle was station manager of KASU, the NPR station at ASU, until his retirement in June. He’s still part of KASU Music Nights, held at Dyess Colony Circle, the hub of the community since it was created.

The first day of the festival features music at Dyess Colony Circle with TRIPPP, real-life triplets who are juniors at Jonesboro High School; Little Rock singer-songwriter Mark Currey; Paragould’s Drive South band; and, blues from Billy Jones Bluez. Friday’s music at the Colony Circle is Stephen Hardy of South Carolina, who portrayed Johnny Cash in productions of Million Dollar Quartet; blues from Marcus “Mookie” Cartwright of Helena; folk music from Mountain View trio, Harmony; the Zyndall Wayne Raney Band; and singer-songwiter Corey Jackson. All music and symposium events are free, except for the ticketed Saturday concert with the headliners.

Arkansas is embracing its Cash roots — and Cash never forgot his Arkansas roots. But, then, how could he? It’s where the music that made him famous began.