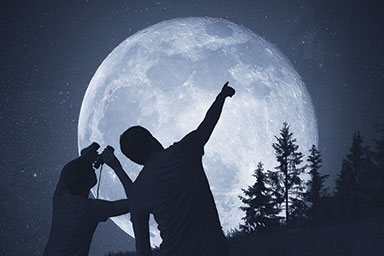 A good pair of binoculars will help beginner backyard astronomists to have stars in their eyes.

If you can spot the seven stars forming the Big Dipper, that’s a first step toward adding a twinkle to your stay-at-home routine in these pandemic times.

It’s an after-dark diversion that might turn into an enthusiasm, comfortably pursued from your porch, yard or field — alone or with family members. A human fascination since ancient times, it requires no special equipment, although a good guidebook and a pair of binoculars come in handy.

Arkansas, with its abundance of rural and small-town settings, makes the pastime easier to enjoy. Without the distracting bright lights of cities, the viewing is clearer and more detailed.

This adventure is astronomy, which may stir daunting images of scientific professionals probing the depths of our galaxy and the universe with radio telescopes and other elaborate tracking devices. But your own eyes — ideally aided by binoculars — can be instruments to focus on our moon and other relatively nearby celestial objects.

Backyard astronomy is the tag sometimes attached to the recreational searching of the night heavens. Arkansas’ several astronomical societies are home to sky-watching devotees, some of whom have advanced their interest beyond hobby status to solid expertise.

They are delighted to provide tutelage, sharing a passion for the panoramas of outer space. They take a reality-based view of the visible skies — less melodramatic than Star Trek, Star Wars or 2001: A Space Odyssey — but amazing enough for the science behind the countless pinpricks of light.

“To get started, just go outside and look up,” says Edward Swaim, president of the Central Arkansas Astronomy Society. “It seems obvious, but we’ve become so disconnected from the natural world that people forget.”

Swaim suggests that “you print a free star chart at starmaps.com, find when the International Space Station will pass over your house on spotthestation.nasa.gov, or download a free planetarium application for your phone.”

No equipment is vital to getting started, he says, “although a reclining lawn chair would be great. Binoculars, any pair you already have, will show amazing detail on the moon and will let you see many, many more stars than the naked eye. It’s best to prop the binoculars on something steady.”

All that’s needed “to dip your toes in astronomy,” agrees Katherine Auld, a member and former officer of Sugar Creek Astronomical Society, “is a good pair of binoculars and either a constellation guidebook or an app on your phone.”

One of Auld’s favorite apps is the free SkyView Lite: “It has excellent features. You can set the view to red light, which is most useful for maintaining your dark-adjusted eyes outside at night. A fun search feature lets you pick an object from a long list and be directed by a small arrow how to move the phone to find that feature.”

James Bruce McMath, a former Central Arkansas Astronomy Society president, suggests to “first get a good beginner’s guidebook. Which one depends on the person, age and nature of interest. A good choice for most people is NightWatch: A Practical Guide to Viewing the Universe, by Terence Dickinson.”

McMath chairs the Arkansas Natural Sky Association, which focuses on artificial-light pollution. He advises next “to find one of several skywatchers’ websites and follow it. You can also subscribe to a magazine such as Sky and Telescope or Astronomy. And join an astronomy club if one is nearby.” 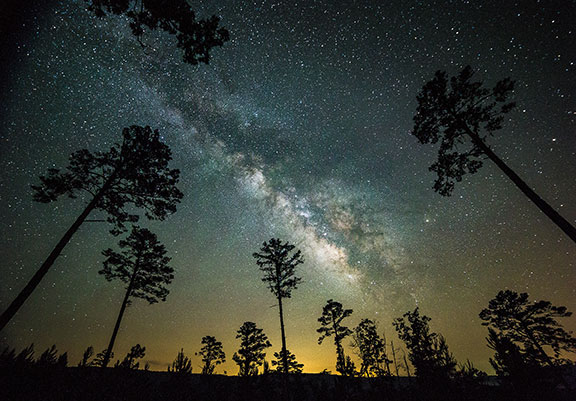 Swaim, Auld and McMath all caution backyard astronomy newcomers to resist any urge to buy a telescope.

“People think ‘astronomy’ is using a telescope,” Swaim says. “There are too many telescopes gathering dust in closets and garages. Telescopes are wonderful, but are difficult to learn to use. They definitely don’t give Hubble Space Telescope views, so they disappoint beginners. Don’t buy one. Just go outside, as far away from city lights as possible, and enjoy.”

Auld, also an assistant professor at Northwest Arkansas Community College and board chair of NWA Space, says that instead of a telescope, beginners should get “a pair of 10×70 binoculars and spend several nights viewing the sky with those. Learn the constellations, a few major deep-sky objects and a practice we call ‘star hopping.’ That is how astronomers navigate the sky. It is as simple as finding the North Star [Polaris] by finding the Big Dipper first.”

Relaxing under the stars

McMath says, “The naked eye under a dark sky is instrument enough to get started. In fact, a telescope is a distraction for a beginner. It’s a complicated instrument.”

He believes that the pandemic-induced need to shelter at home is a fine time to take up backyard astronomy.

“Lying under a star-filled sky and listening to the sounds of nature cleanses the soul, renews the spirit, brings enlightenment and perspective back into one’s life,” McMath says. “It releases stress as well, which is good for the immune system.”

Swaim says that during this period of self-isolation, “People may have more time to read about the sky. They may be more relaxed in the evening and prone to sit outside and enjoy the stars — just like more people are noticing backyard birds again.”

Novices can find growing pleasure in scanning the skies as their skills develop, says Auld, who cites the example of her 16-year-old daughter, Bella Coleman: “She told me it gets easier and easier to identify what you are looking at. … She was so happy to be able to recognize Orion by herself. Now she can find it easily, because she knows it is usually high in the sky.”

McMath sums up what could be a cosmic reason — literally and figuratively — for getting to know the heavens.

“The night sky is the grandest spectacle there is. Knowingly taking it in should impart a sense of privilege that is deeply satisfying.”