Angela Kasper and her husband, Shane, ran a very popular restaurant in Clarksville for about 10 years before 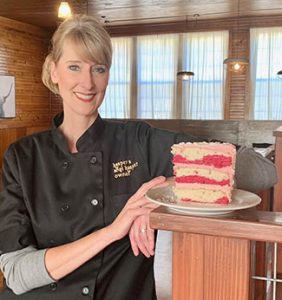 they opened Kasper’s on the beautiful campus of University of the Ozarks in 2019.

Angela said the Clarksville Chamber of Commerce and the University of the Ozarks recruited the couple to open Kasper’s in the Vorhees Building. The building is a stunning native rock structure that began its life as an elementary school in 1940. The Vorhees Building was used as the first pharmacy school in Arkansas, a U.S. Navy meteorology school during World War II, a student union and offices before it became Kasper’s. Additional trivia: The parking lot housed a swimming pool at one time.

Angela said the first time she and her husband toured the building, she felt a sense of peace and comfort. Once the renovation began to turn the building into a restaurant, the couple and construction crew members uncovered layers of original craftsmanship and beauty, including original hardwood floors, solid wood walls and much more. She said the partnership with the University of the Ozarks has been perfect throughout the process and remains so today. 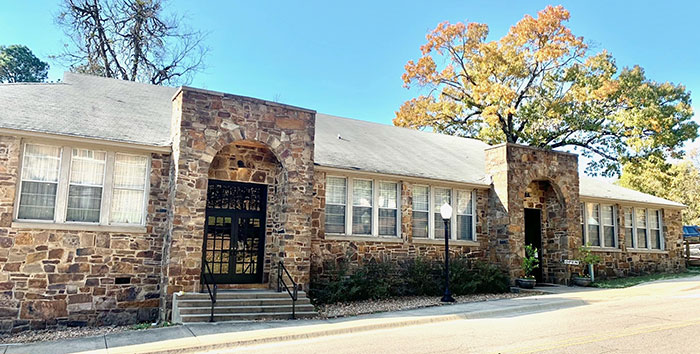 Kasper’s is located in the renovated Vorhees Building at the University of the Ozarks.

“We repurposed as many items that were within the building as possible and even got creative with items from our family’s farm operations,” she said. Check out the light fixtures when you visit, and see if you can figure out what they once were. And, you must check out the restrooms.

Angie truly loves her restaurant and her customers, and she gets a twinkle in her eyes when she speaks about 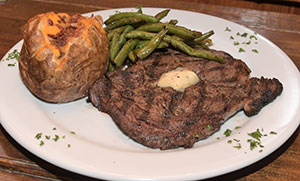 A ribeye, served with a loaded baked potato and green beans, at Kasper’s.

them: “We enjoy serving our customers the ‘meat-and-potatoes’ meals that they enjoy, but really enjoy it when they learn to love slightly different dishes that quickly become their new favorites. Our goal was to provide a place that people could sit down and enjoy a good meal together.”

Kasper’s is known for excellent steaks that are Iowa Premium Certified Angus Beef, aged at least 30 days and 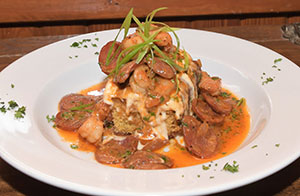 cut daily, on-site from beef that has never been frozen. I tried the ribeye, which was divinely seasoned and perfectly grilled and plated over a red-wine-mushroom demi-glace and served with baby green beans and a choice of a potato (I selected baked). Angela told me many of the regulars rave about the Kasper’s Chop, a bone-in pork chop. And, she said, the restaurant typically sells out of its Weekend Reserve Only Prime Rib, served Friday and Saturday nights.

Angela let me try a new dish that I absolutely loved — Kasper’s Spicy Shrimp. This culinary creation featured Cajun shrimp and Andouille sausage sautéed and placed with aioli on a wedge of jalapeño cornbread topped with spicy compound butter. I can’t tell a fib; I ate the whole thing!

Kasper’s has many desserts, including creme brulee in varieties that change with the season. 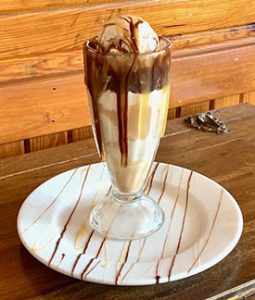 The Affogato is an unforgettable dessert at Kasper’s.

Angela served me the Affogato — ice cream in a sundae glass drizzled with espresso, caramel and chocolate sauce. Be prepared to fall in love with the Affogato. The Strawberry and Creme Cake at Kasper’s can only be found at the Clarksville establishment, as it is proprietary to the restaurant. The must-try cake features nine glorious layers of strawberry cake and sweet buttermilk cream cheese.

The staff at Kasper’s is as charming at the restaurant. Many of the “A Team” at Kasper’s worked with Angela at her previous restaurant, and they are just as personable and caring here. 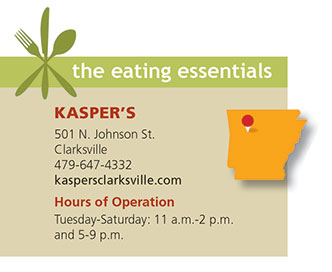