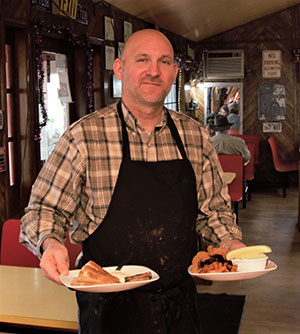 Many restaurants have a few secret ingredients, but Lackey’s Smokehouse Restaurant in Newport has top secret recipes that have been pleasing crowds for many, many years.

According to owner Scott Whitmire, the restaurant’s tamale, ranch dressing and fried fish recipes were acquired from other very popular establishments and are now highlights of the Lackey’s offerings.

The tamales, known as Lackey’s Tamales, are a regional legend and have been very popular for many years. At one time the Cajun-style chicken tamales were produced in a nearby factory and even distributed via the world’s largest retailer. Currently, Whitmire and his staff lovingly create about 17,000 “Lackey’s” tamales a month by hand. Yes, that is a lot, but the tamales are just that good!

A plate of Lackey’s tamales will make you smile.

“I want to make the tamales exactly as Mary Lackey (the creator of the famed tamale recipe) made them,” Whitmire said. He actually found Lackey’s original handwritten recipe card and followed the recipe meticulously. Whitmire is a good tamale-maker, as Lackey rated the Smokehouse version of her tamales as “very, very good.”

The tamales feature a unique blend of Cajun seasoning and tender, shredded, slow-cooked chicken that delivers a slightly spicy flavor that is pure joy to one’s taste buds. You can even order the tamales frozen to take home and enjoy later. I enjoyed a few tamales during my visit and took some frozen treats home. They were a hit at my house.

“We specialize in tamales, but we are really proud of our service to our customers,” Whitmire said. “We have customers that visit us daily. We treat our guests as long-time friends.” 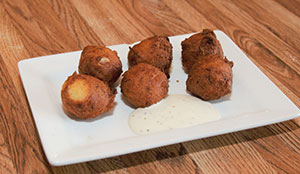 Hushpuppies are a must try.

The fried catfish is also very popular. According to Whitmire, the fish seasonings are from a recipe that a popular fish restaurant in a neighboring city used for 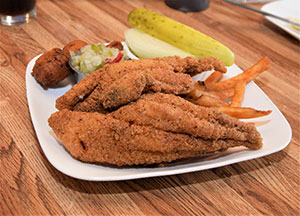 A plateful of Southern-fried goodness.

years. “I had asked for the recipe from a family friend for years, but she would not share it until the recipe creator passed away,” he said. “I consider it an honor to have the recipe.”

Diners are thrilled that the secret fish recipe was revealed, as the Smokehouse uses it to coat huge catfish fillets that are cooked to golden brown and served with fries, coleslaw, hushpuppies, an onion slice, a dill pickle spear and homemade chow-chow. The fish features a one-of-a-kind flavor thanks to the secret spices, and the chow-chow is a nice addition to the plate. 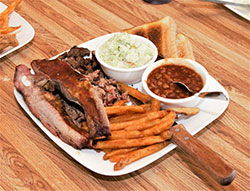 The barbecue is very popular.

With Smokehouse in the restaurant name, you can bet great barbecue is served. I sampled the barbecue beef, pork and St. Louis-style pork ribs. Each variety of barbecue was very good, and the ribs were nice, big, meaty cuts. Slaw, baked beans, fries and Texas toast rounded out this hearty menu specialty. I’m sure the barbecue seasoning and smoking techniques were based on a family recipe. Maybe you can ask when you visit, or I’ll ask when I pick up a few dozen tamales the next time I am traveling close to the restaurant.

The recipes may be secret, but it is no secret that Lackey’s Smokehouse Restaurant will provide you with a great meal and wonderful service.