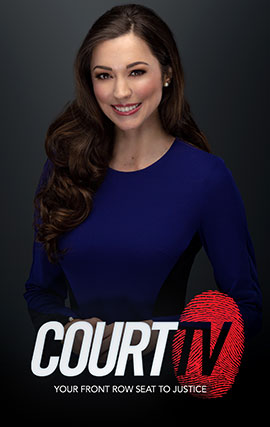 Chanley Painter of Arkansas is the legal correspondent for Court TV.

“Painter” is about the only occupation not listed on the resume of Chanley Painter, Miss Arkansas USA 2009.

The cable network, which launched in 1991 and changed to TruTV in 2008, relaunched on May 8 as a digital broadcast channel.

And Painter says the timing is perfect.

“The interest for that real-life drama, that true crime … is at an all-time high right now,” she says. “There’s really not any other channel or network that covers daily courtroom — live courtroom — all day, every day. And we’re going to fill that void.

“And I’m going to be the one on location — at the courthouse, as it’s happening.”

The network sought her out, flew her to Atlanta for an interview and hired her; she started in February. While Court TV employs other reporters and field producers, Painter is the only legal correspondent, and she’ll be traveling all over the country.

All over the country. On the Thursday morning we talked with her, she says she’s preparing for yet another trip: “I’m actually going to head off to San Diego on Sunday for another trial and then back to another one in Georgia. It’s exciting.”

As for when and how we can catch her, Painter says, “We will be streaming live 9 a.m. to 9 p.m. on CourtTV.com and on the Court TV app. And I will be on probably most all day long … at least the first couple of weeks. They’ll come out live to me at the courthouse every time there’s a break in court, a recess or a lunch break … asking me questions about what’s happening.”

Competing in scholarship pageants helped Painter fund her education. She placed as a runner-up in Miss Arkansas in 2007 and 2008. Next, she moved to the Miss USA system. She won Miss Arkansas USA 2009, and she earned a Top 10 spot at the Miss USA competition.

After school, Painter joined her family that had moved to Cleburne County. She started her law practice in Heber Springs and worked part time as deputy prosecuting attorney.

She got her start in television in 2016 during the murder trial of Realtor Beverly Carter.

“I started at Channel 4 with no journalism background or degree, so I kind of had to learn by doing,” she says. “I started as legal analyst. … I thought, ‘I really enjoy this — this is really fun. I’m comfortable in front of the camera.’ So, I thought, ‘What else can I do?’”

Under the direction of KARK and Fox 16 news director Austin Kellerman, she continued working on a freelance basis, learning the ropes while filling in for reporters. Eventually she was hired full time as a multimedia reporter.

“Chanley is someone who always gave 100% to anything she did,” says Kellerman, who recently left Arkansas to become director of digital content for Nexstar Media Group in Irving, Texas. “While it was tough to see her leave Little Rock, it wasn’t a surprise that someone picked her up for bigger and better things. I can’t wait to see how she continues to grow at Court TV.”

KARK Anchor Mallory Brooks, who also worked with Painter, says, “Chanley was a joy to have in the newsroom. She worked hard and brought so much personality and fun to our broadcasts. When she first told me about the opportunity in Atlanta, I had no doubt she would get the job. She excels at everything she does.”

“Busy” is how Painter described her new, fast-paced position.

“I started, and on Day 4, they sent me — oh welcome to Court TV! — they shipped me off to cover a trial in Florida!” she says with a laugh.

She adds that while familiarizing herself with one case, her boss handed her another: “‘Here’s a new trial that you need to become an expert on by the end of the day.’”

It suits Painter, who grew up glued to true crime shows and Matlock, just fine.

Painter says she’s enjoying her new home: “I love Atlanta. I love the Court TV family and everyone that I’m working with.”

Still, a piece of her heart — and her beloved pets (she had to leave them with loved ones because of her travel schedule) — will stay here.

“I miss my family and fur babies and Arkansas,” she says. “I have friends who will post pictures on social media of, you know, the Arkansas River, wherever it might be, and I’m like, ‘Aw, I miss Arkansas.’”

Luckily, she says, “We’ve been so busy here traveling I really haven’t had time to slow down to even think about it.”