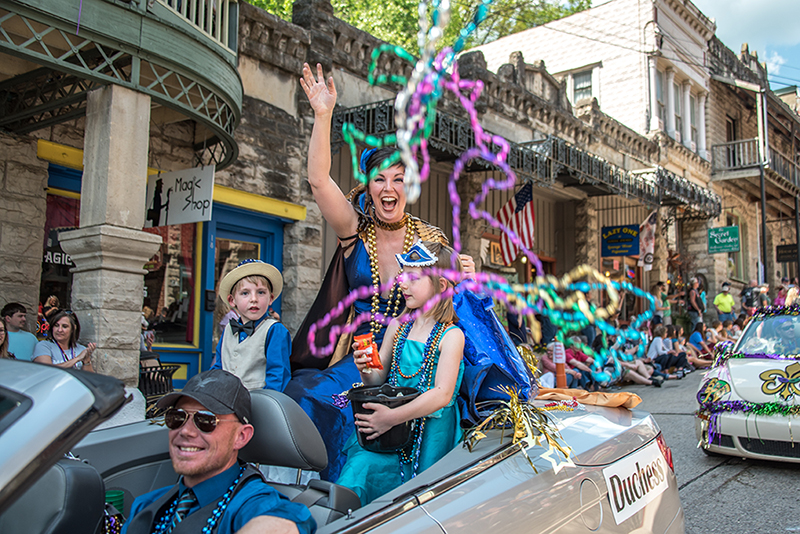 If you want to celebrate Mardi Gras this year but don’t want to brave the crowds of revelers in New Orleans, you have several festive choices here in Arkansas.

In recent years, especially with the influx of new residents who left New Orleans in the aftermath of Hurricane Katrina in 2005, Arkansas’ Mardi Gras celebrations have risen to new levels. Restaurants and bars across the state offer celebratory feasts while King Cakes of all sizes, shapes and flavors can be bought in bakeries. Several cities host public celebrations complete with parades and parties for Mardi Gras, which takes place this year on Feb. 21.

Mardi Gras-style celebrations first began in ancient Rome when early Christians incorporated elements of pagan spring festivals to mark the time before Lent, a period of penance and fasting between Ash Wednesday (Feb. 22 this year) and Easter (April 9 this year). The tradition became popular throughout Europe, including France where the name Mardi Gras — French for Fat Tuesday — was coined. The time between the Christian holiday of Epiphany and the start of Lent became known as carnival.

In the United States, New Orleans, with its rich French heritage, has the best-known Mardi Gras celebrations, dating back to the early 1800s. Today, New Orleans’ Mardi Gras parades draw about 500,000 spectators, who line the parade routes waiting for costumed participants to throw them bead necklaces. The celebrations are organized and led by krewes, which are clubs/organizations loosely based on royal courts, complete with kings and queens. In addition to parades, krewes typically host masquerade balls during the carnival season. 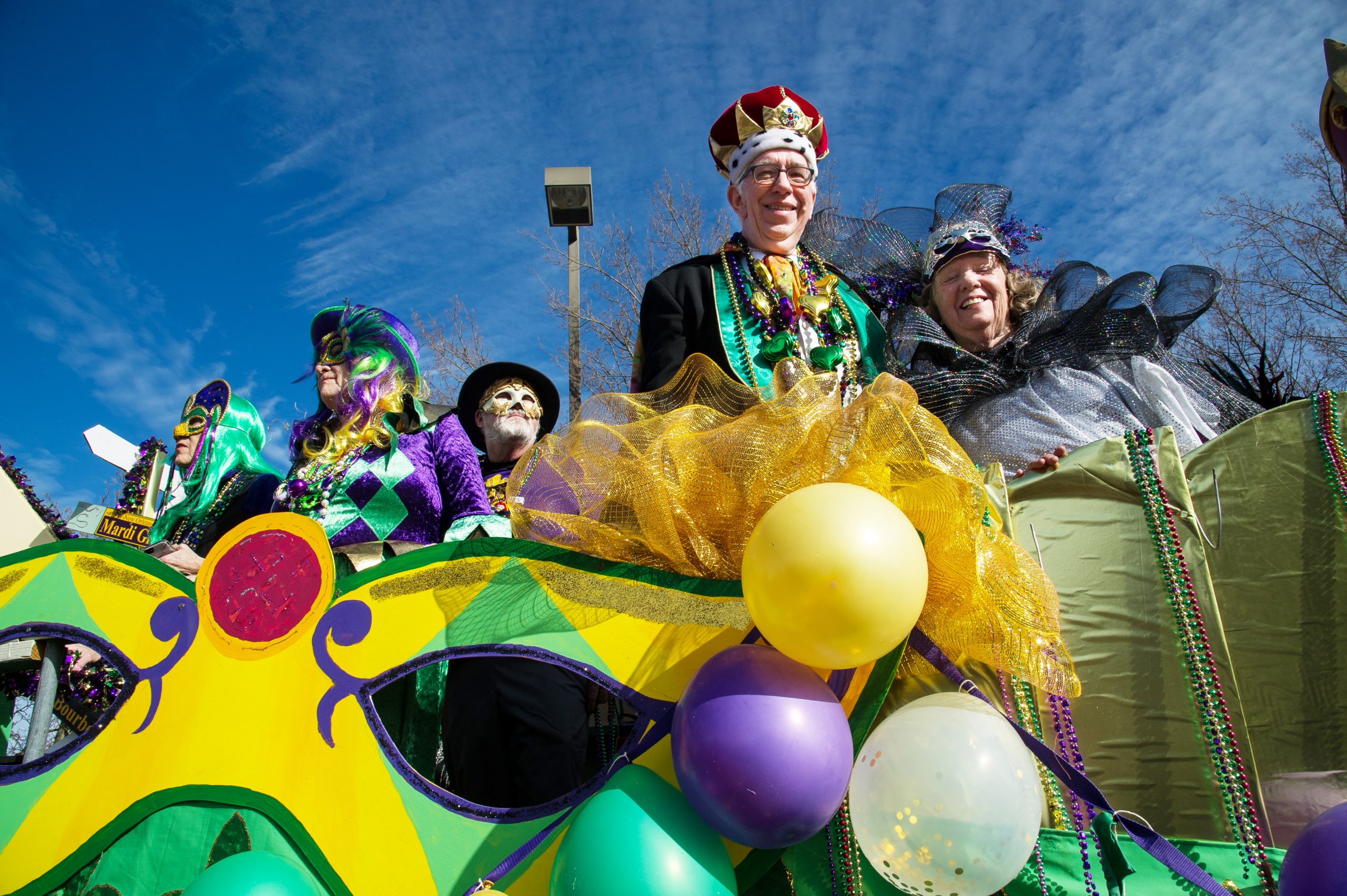 The King of the Eureka Springs Mardi Gras celebration is the star of the annual parade.

In the resort town of Eureka Springs, the spirit of New Orleans Mardi Gras is alive and well, thanks to the Krewe of Krazo, a group formed by New Orleans’ residents displaced by Hurricane Katrina. The first “Eureka Gras,” as they called it, took place in 2006, says Dann Richardson, a member of Krewe of Krazo.

“By 2012, it had started to take root in the town; we started getting sponsors,” he says.

The crowds continued to grow bigger each year until the pandemic led to the cancellations of the 2021 and 2022 celebrations. Richardson says the town is excited about continuing the tradition in 2023.

“This year we anticipate the growth of the parades to be larger than ever,” Richardson says, adding that the parades are “family-friendly” with a strong focus on kids. In addition to the Krewe of Krazo, Richardson says there are new krewes joining the celebration this year, each with a theme. For the Krewe of Krazo, the theme is ancient Roman legends. 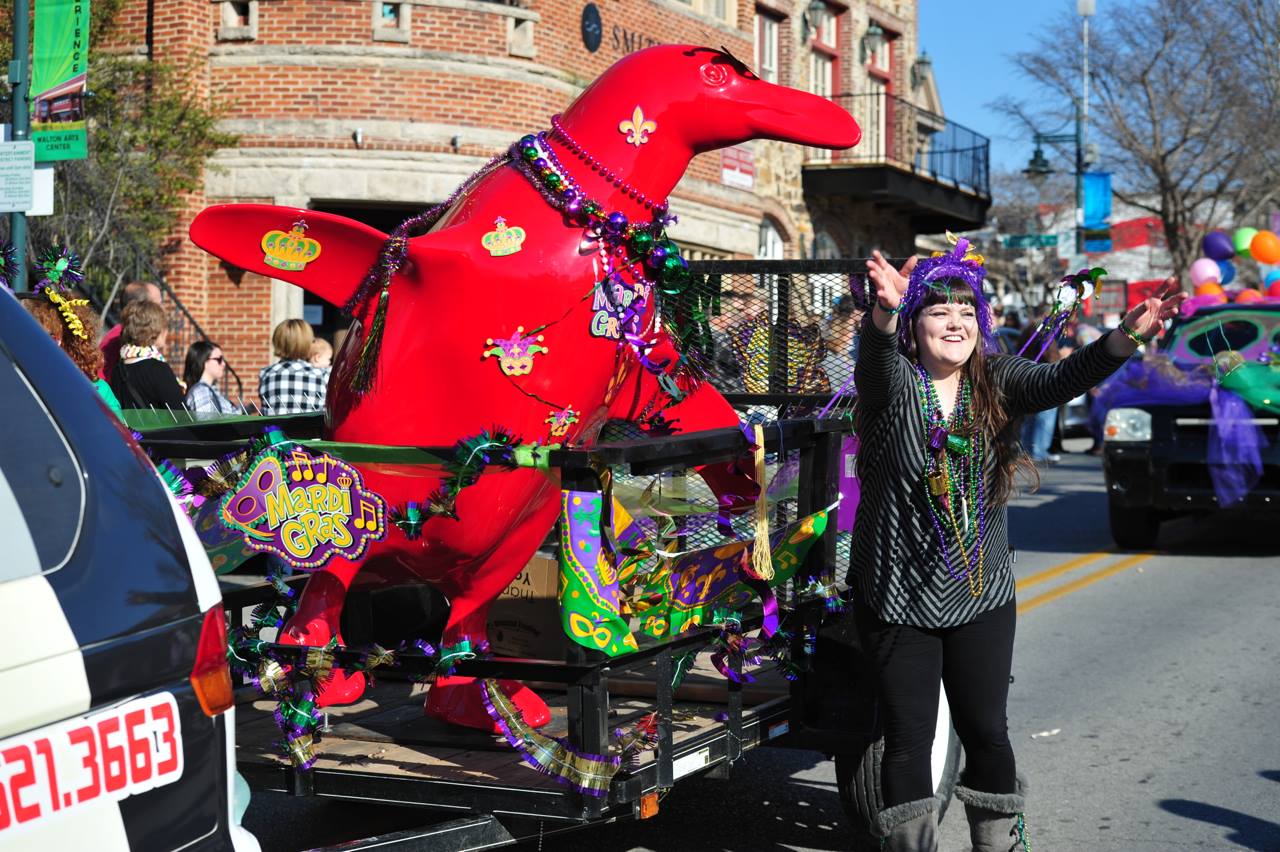 Throwing beads and candy to the crowd is part of being in the Fat Saturday Parade of Fools in Fayetteville.

In nearby Fayetteville, organizers will host the 30th anniversary of the city’s Mardi Gras celebration, which began as Fat Tuesday on Dickson Street. Nineteen years ago, the Fat Saturday Parade of Fools was added to the festivities. It will take place this year at 2 p.m. Feb. 18, starting on the Fayetteville Square and continuing along Block Street to Dickson Street, the city’s main entertainment district. (fayettevillemardigras.com) 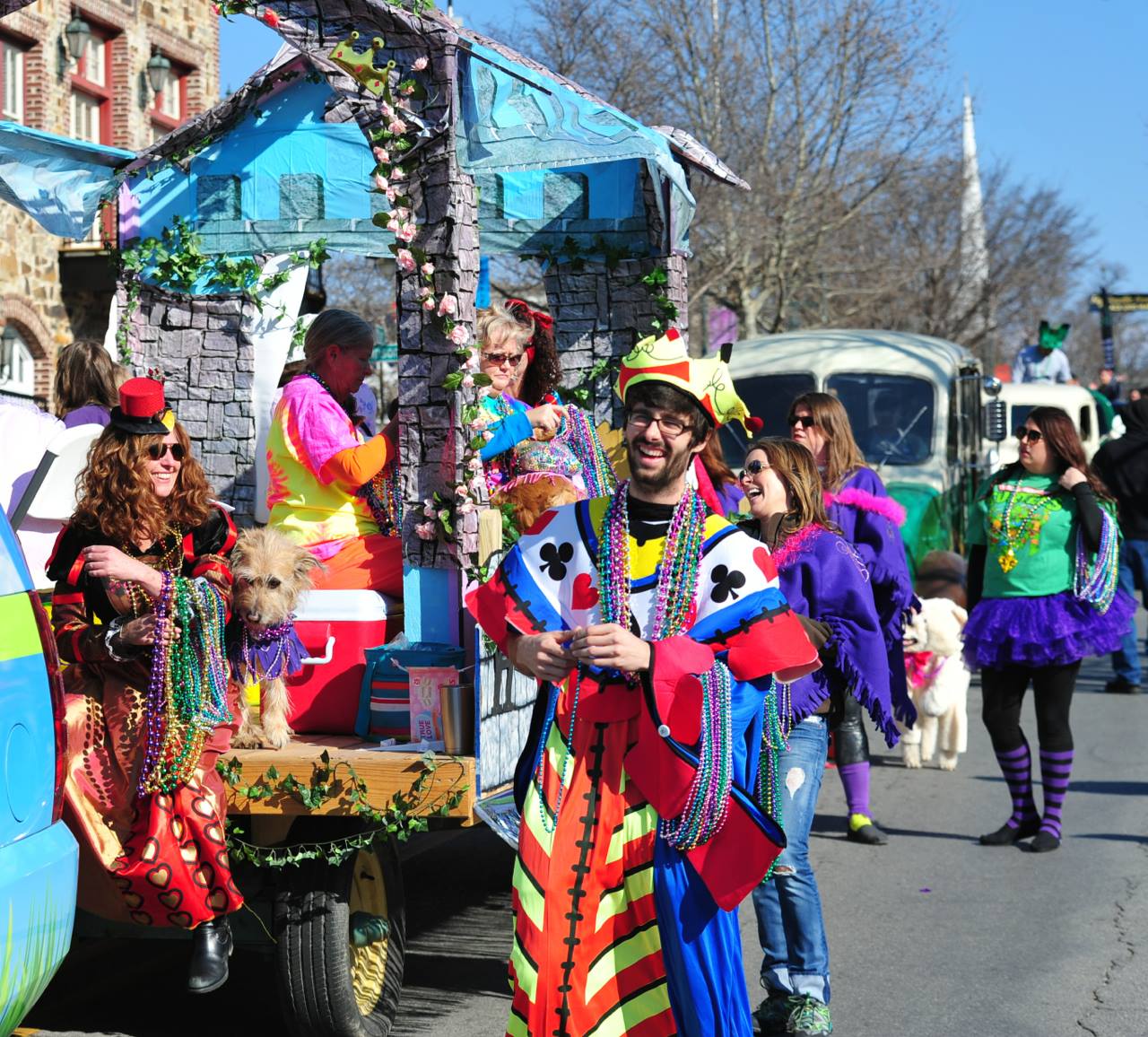 The capital city of Little Rock’s SoMa (South Main) neighborhood is also joining in the fun with a parade and block party on Feb. 18. The block party, which starts at 11 a.m. and continues to 5 p.m., includes music, the 10th annual Little Rock Beard & Mustache Contest presented by The Root Café and the Arkansas Times, local vendors, food trucks and activities for kids. The “Superheroes & Villians” themed-parade, complete with floats and participants loaded with beads, starts at noon. (somalittlerock.com/somardigras)

Moving to Southwest Arkansas, Texarkana will host its 8th annual Mardi Gras Parade at 3 p.m. Feb. 18. The Rollin’ Down Broad parade will travel through the streets of downtown Texarkana with floats, marching and dance groups, classic cars, jeeps and more. Come early for food trucks and craft vendors, which open at 10 a.m., and stay late for after-parties in downtown venues. (facebook.com/events/452266850380825)

Regardless of where or how you celebrate Mardi Gras this year, be sure to remember the classic Mardi Gras mantra: “Laissez le bons temps rouler!” Let the good times roll!