Once upon a time, there was a state Capitol building in the land of Arkansas.
The people had completed the Capitol building 23 years earlier in the year 1915, but they had not done much to make the grounds pretty or maintain the property. Few public buildings did much decorating to celebrate the holiday season back then.

A man, named Claris G. Hall, who had as a child been disabled with polio, had been elected secretary of state. Because of the crippling disease he had survived, the people fondly called him “Crip” Hall. Crip had promised the people that he would make a showpiece of the Capitol building, a shining symbol of the greatness of the state.
When the annual holiday season arrived, Crip had an idea. Because he had once been a sick child himself, Crip wanted to do something nice for the sick and injured children of Arkansas so they could enjoy the annual holiday, too. He went to visit many people, asking them for help to give presents to the sick children. The people, touched by his request, gave and gave. He had workers climb to the very tip-top of the Capitol dome and hang long strips of full-sized red and blue lights, mounted on thin sheets of metal. On the lawn, his workers set up a Christmas tree, a natural fir that glistened with aluminum paint. When electrified, the shiny tree would spin round and round while bright colored lights beamed upon it.

Three days before the holiday, Crip invited the sick children, their parents and other kind people to the Capitol for a party on the lawn. The weather turned wet, but Crip knew the party was important, so he invited everyone inside. They brought a second tree into the beautiful second floor of the Capitol Rotunda, and 145 children and other guests gathered around for music and merriment. The sick children received their gifts and their spirits lifted.

When they turned on the exterior lights, the Capitol dome shone the holiday colors far into the night. People could see their bright-colored Capitol for miles around, pointing it out to their wide-eyed children. Those who saw it smiled in their hearts at the beauty. Many told Crip he had done a great thing. Many said this was a gift to all the people. Many declared this should be a new annual tradition.
And so it was. Crip is long gone, but every year the people who work in the Capitol decorate it with lights and ribbons and all manner of festive magnificence. The people gather to celebrate the holiday, and the children turn on the lights for all to see.

When people ask about the Capitol’s famous holiday lighting traditions, Arkansas State Capitol Historian David Ware tells the adjacent story — albeit in much less fairy-tale form — of how the very popular Secretary of State C. G. “Crip” Hall in 1938 first decided to showcase the Capitol during the Christmas season.

The story, he says, goes a long way in explaining how the season became so important to the Capitol. The first year included special attention to the patients at the then Arkansas Children’s Infirmary in Little Rock, as well as pediatric patients who were spending Christmas at other local hospitals. The Secretary of State’s Office still honors Hall’s tradition — each year, the lights are switched on by children from Easter Seals.

With the exception of two years during World War II and one year during the 1970s’ energy crisis, the Capitol has been adorned with lights and decorations during the holidays every year since 1938, building on each successful season. In 1941, the Capitol was lit early, on a Wednesday night just three days after the attack on Pearl Harbor. Hall made that decision specifically to buoy Arkansans’ spirits in the wake of the newly declared state of war. He told a local paper that in such unusual times, the people of Arkansas needed to have “a little reassuring normalness.”

Over the years and changing secretary of state administrations, the Capitol lights and ornamentation have varied. Some years, the lights were multi-colored while others featured a solid color. In 1947, collections at the Capitol benefitted the Arkansas Tuberculosis Association, so the organization’s 11-foot-tall double-barred Red Cross was mounted at the top of the cupola for all to see. In the early 1950s, the elaborate Christmas production at the Arkansas State Capitol began to be broadcast, first to radio listeners via the statewide “Razorback Network,” then televised by Memphis station WMCT. On Dec. 18, 1954, the State Capitol had its largest audience: the NBC radio network broadcast “Christmas in Arkansas” nationally to hundreds of thousands of listeners who enjoyed the choir of the Arkansas Agricultural Mechanical and Normal College in Pine Bluff, now UAPB, along with the appreciative sounds of the crowd. In the 1990s, when the Little Rock philanthropist Jennings Osborne donated the lighting, scores of colored spiral light-trees dotted the lawn and millions of lights covered the building. The Disney company even sent Mickey Mouse himself to open the holiday season.

Ware says the Capitol’s decorations have also evolved from simple cut-outs of Christmas trees. “The Capitol is not a very fancy building in terms of ornamentation,” he says with unmistakable reverence. “It doesn’t have a lot of art hanging in it. Its real beauty is the stripped-down elegance of the spaces. Our decorations accent those lines. I like to say it’s a ‘thoroughbred’ building.”

For many years there was an oversized nativity scene set up on the Capitol steps. Later, a privately funded carved, wooden nativity replaced it and is now located at the South Mall of the Capitol grounds. Nearby, a tiny Solstice Kiosk donated by the Arkansas Society of Freethinkers contains four lit panels of information about other midwinter celebrations.

Since the spinning aluminum-painted fir of 1938, the Arkansas State Capitol has had many iterations of Christmas trees, some natural, some artificial, some outside, some inside, some on the first-floor oculus of the Rotunda peeking up through the hole to the second-floor Rotunda, and some set up on the second floor itself.

During Secretary of State Sharon Priest’s administration, the staff switched to artificial trees after problems with setting up a natural tree caused damage to the Rotunda’s marble rail. When Charlie Daniels came into office, he returned to using natural trees. In 2011, the tree, an aromatic red cedar, once again was placed in the oculus.

Today, citing state fire marshal recommendations and ease of maintenance, Secretary of State Mark Martin’s administration decorates an artificial tree that Ware says is much improved over previous artificial iterations. “Also,” Ware says with a laugh, “artificial trees don’t have critters come in with them.”

In recent years, the Capitol staff have turned from traditional incandescent lights to simple white LED lights for their greatly reduced energy use, budget savings and extra-long life. They have even converted many of the year-round lights to energy-efficient bulbs. For example, the beautiful chandelier and sconces in the Governor’s Reception Room are now lit with LEDs.

In 2014, the Capitol dome’s LEDs emitted a white light so cool it took on a blueish hue, with the calm gleam of the word PEACE shining from the front of the building. This year, the staff wanted to create a warmer, more luminous glow reminiscent of incandescent lights. In September, they did a test run and determined that using the lights in fewer numbers created the desired effect.
“They’ve gotten better in terms of not just duplicating the amount of light, but also the quality of light,” Ware says. “They do a fine job of illuminating, and they’re engineered to diffuse the light so it’s not simply directional.”

Bret Curry, residential energy marketing manager for the Electric Cooperatives of Arkansas, praised the efforts of the Capitol staff in converting to energy-saving lighting. “It’s terrific to see our state’s leaders paving the way for other public buildings in the state. They’re walking the walk, not just talking the talk. And the holidays are a perfect time to begin converting.”

These days the Capitol typically is lit on the first Saturday of December immediately after Santa has arrived in the Big Jingle Jubilee Holiday Parade. The crowds stream up from the parade route as darkness descends and musicians entertain. Then, Santa and Mrs. Claus come down the Capitol steps, the Easter Seals children switch on the holiday lights, and everyone oohs and ahs while simultaneously the professional fireworks start firing into the sky over the newly lit dome. 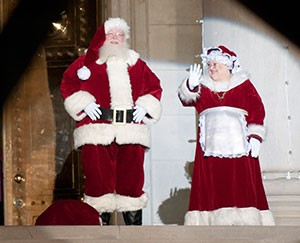 Santa and the missus then make their way upstairs to the well-appointed Santa’s Workshop, where for no cost to parents, they will meet everyone in a long winding line of families, pose for pictures and selfies, and collect Christmas wishes galore. Anywhere you look, Arkansans are posing for family pictures, making the grand holiday decor into posh backdrops.

Maximizing savings and spending responsibly are drilled into everyone’s brain, yet the Capitol staff spare no creativity in transforming the stately building into a wonderland of delights each December. Jennifer Hughes, assistant to Ware, is the “ferociously creative” mastermind behind Santa’s Workshop.“Jennifer decided we could go beyond the basic fireplace, rug and two chairs set,” Ware explains. “She came up with something that would fit throughout the month, even when Santa wasn’t there.”

Hughes’ handiwork is apparent in the tiniest details, such as the book covers she designed to line Santa’s shelves. It’s apparent that care is put into stocking the shelves with titles such as “Somebody’s Watching You;” “The Purpose-Driven Elf;” “Encountering Aggressive Canines;” “They Used to Laugh; a Guide to Overcoming Bullying,” by Rudolph; “Journey to the North Pole;” and “Fuzzy Logic: The Wisdom of Teddy Bears.”

Ware, who came to Arkansas by way of several other states before entering his position more than 14 years ago, admits the extensive preparations initially took him aback. But that changed once the events got under way. Ware realized the extraordinary phenomenon he was witnessing: families coming into the Capitol with wide-eyed, be-mittened children awestruck by the spectacle, families posing not just with Santa, but all over the decked halls of the Capitol itself. He understood then the value was “incalculable.” “I realized the citizens were having fun with their State Capitol,” Ware says. “That’s the best thing you can do to get people comfortable with this building.” He adds that the festivities show that the Capitol is not just a place where the politicians come every spring — it’s a place to make happy holiday memories. “The choirs come in and sing in that big acoustical palace upstairs, and it sounds amazing,” Ware says, smiling. “Even a little choir of seven or eight kids sounds great when you have those kinds of echoes and reverberations. It’s magical.”

The 2015 Capitol Lighting Ceremony will begin at dark on Dec. 5 on the South Lawn (facing Capitol Street), following the Big Jingle Jubilee Holiday Parade. Check the weather forecast, wear comfortable shoes, and bring a camera to take your own pictures with Santa.
If it isn’t already, make it a tradition.