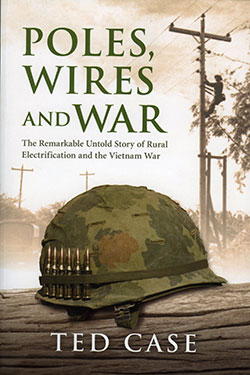 During one of the hardest chapters in American history, electric co-ops volunteered to win the war in Vietnam. They didn’t win the war, but in his new book “Poles, Wires and War, The Remarkable Untold Story of Rural Electrification and the Vietnam War,” author Ted Case tells a riveting story of how they tried. He argues that the success electric co-ops had in the conflict that divided our nation just might have helped that southeast Asian nation recover more quickly by demonstrating the value of bringing electricity to the countryside.

Case brings authority to the book as executive director of the Oregon Rural Electric Cooperative Association. But he also makes good use of his masters degree in fiction writing to tell a compelling story of an audacious offer from Arkansas native Clyde Ellis, the head of the National Rural Electric Cooperative Association (NRECA), to President Lyndon Johnson. Give the South Vietnamese electricity, said Ellis, and you’ll win their hearts and minds in the fight against communism.

What followed was a classic battle of enormous personalities, foreign and domestic political and military maneuvering, and a determined band of people who brought electricity to the American countryside, fighting the odds to bring light to a war zone halfway around the world.

Case creates a fast-paced narrative as the crews race the collapsing war to pass bylaws, organize the co-ops and tangle with corruption, bureaucracy, in-fighting, and oh yes, Viet Cong soldiers determined to destroy what they were creating. In the end, in less than four years, three electric co-ops were bringing electricity to more than 8,000 members. 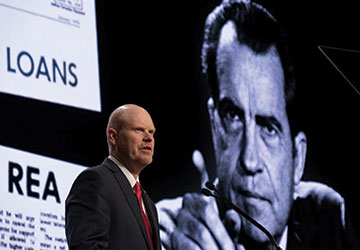 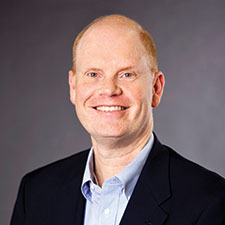 It was a service the South Vietnamese villagers valued and owned. They even felt strong enough to literally fight for it, in a doomed battle against an assault from Viet Cong armored tanks. Case recently talked about the book and what the history of electric co-ops means for their member-owners.

Question:         How did you end up writing about electric co-ops in the Vietnam War?

Ted Case:        It came out of my first book and the chapter on President Lyndon Johnson. In 1965, he received a letter from  Ellis saying that NRECA could help win the war by putting electric co-ops in Vietnam. I was intrigued by that bold claim. Since Johnson was such an early and strong supporter of rural electrification in Texas, he embraced Ellis’s proposal fully. Learning about that story led me on this quest to track down some of the men and women who had worked on it.

Ted Case:        It was a really good effort. Just 20 men went over there in a five-year period. These were the most difficult co-ops to establish in the history of the electric co-op program. The Viet Cong soldiers that were fighting against the South Vietnamese tried to cut down the co-op lines and chop down their poles and blow up their dams and they did all those things. The people trying to start the co-ops faced rampant corruption and an inability to get poles and other materials. They got three co-ops up and running and brought light to thousands of villagers. But the program ended and they had to leave and the communists overtook the country.

Question:         What lessons did you learn from researching the book?

Ted Case:        The support the U.S. co-op workers got from the Vietnamese villagers was not unlike the support from the farmers who started electric co-ops in the United States in the 1930s. The Vietnamese villagers wanted a radio. They wanted an iron and lights to read. Toward the end of the war when the communists were rolling through the country in 1975, they came to a town that was one of the co-ops’ headquarters. The militia in the town rose up and fought against the communists in one of the most heroic battles of the war. They were fighting for their electricity. They were fighting for what they had built.