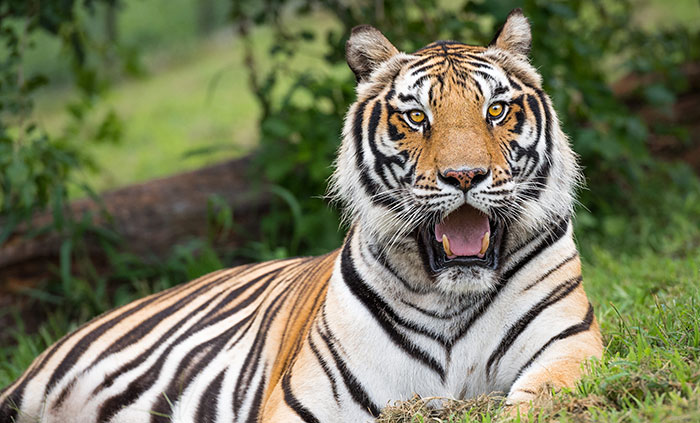 Chuff, one of Turpentine Creek Wildlife Refuge’s many big cats, is named for the friendly noise tigers make to greet each other. photo by Ike Wever, TCWR

We arrived at Turpentine Creek Wildlife Refuge (TCWR) after hours, making the winding drive through the Ozarks and moving into our “Siberian Suite” in the dark. As my husband and I unloaded the car, we heard the first noises. The big cats were restless, making rumbling, trilling night-sounds distinctly larger than and unlike anything that has ever come out of our household cat. We exchanged wide-eyed glances, then scurried inside with glee. 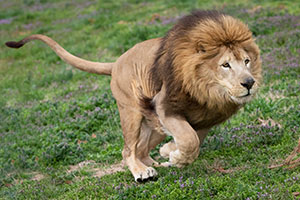 Tsavo runs up a hill, his dark mane flowing in the wind. He has made his home at TCWR for almost eight years.

I awoke before dawn, listening to what sounded like Africa outside: caroling lions and chuffing tigers, I would later learn. Within minutes, we were peeking through the blinds, gasping. Dawn revealed Montana and Poncho, grown, 600-pound tigers pacing right outside our bedroom window. (Of all the lodging, the “Siberian Suite” is uniquely adjacent to a tiger habitat.) It mesmerized us for almost an hour. I realized I hadn’t known what to expect. I thought I was there to see big cats. I had no idea my brain and heart were about to explode, one with facts, the other with love. 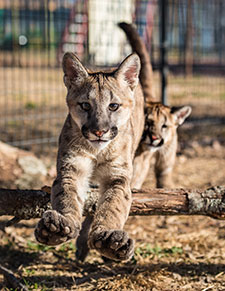 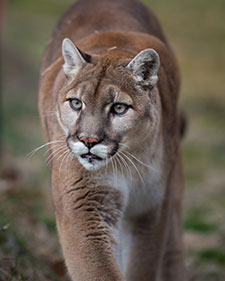 Nala, an 18-year-old female cougar, at her TCWR home. 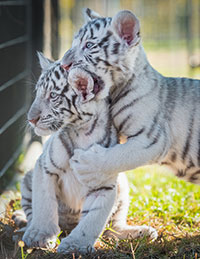 Sibling cubs Tanya and Kizmin. Their triplet siblings Rocklyn, Black Fire and Peyton, four months older, were all part of a cub-petting business for profit prior to arriving at Turpentine Creek Wildlife Refuge.

Best in the nation

TCWR, located seven miles south of Eureka Springs on Arkansas 23, works something like a humane society without adoptions. The difference is the abused, neglected and abandoned animals here are huge, lethal predators, and the refuge that will be their forever home is the best they’ve ever known. The animals appear content to live out their lives in peace and comfort thanks to the outstanding care they receive here.

The five Safari Lodges are the most popular, arranged in a spoke and wheel around a shared firepit, hot tub and lounging area. photo by Scott Smith, TCWR

Started 25 years ago (May 1 is the 26th anniversary), TCWR, which is served by Carroll Electric Cooperative, has rescued more than 500 exotic and native animals. The animals, all but one born in captivity, live in large, spacious habitats with room to exercise, each with almost countless security features and protocols to protect staff, the public and the animals.

“Once in captivity, it’s nearly impossible to properly and successfully introduce exotic animals into their native environments,” said Emily McCormack, animal curator at Turpentine Creek for the past 19 years.

The animals have concrete “night houses” to retreat to for comfort and privacy in any weather, and enrichment toys and climbing structures to keep life varied. Visitors can take walking or trolley tours, do a self-guided short tour, or sign up for the periodic private tours with the curator.

Whitney was rescued from a breeding facility in 2002. The animals have plenty of toys and playspace. photo by Ike Wever, TCWR

“Running the sanctuary is very expensive,” said Tanya Smith, president and founder. “Operational costs are about $2.6 million annually, which are offset, for the most part, by admissions and lodging revenue, retail sales and private donations.”

As Smith explained it, a true sanctuary means that humans do not play with or touch the animals (except when sedated for veterinary care), and they do not buy, sell, breed or trade them. TCWR recently helped found the Big Cat Sanctuary Alliance, a collaborative network of 14 organizations certified as true sanctuaries. 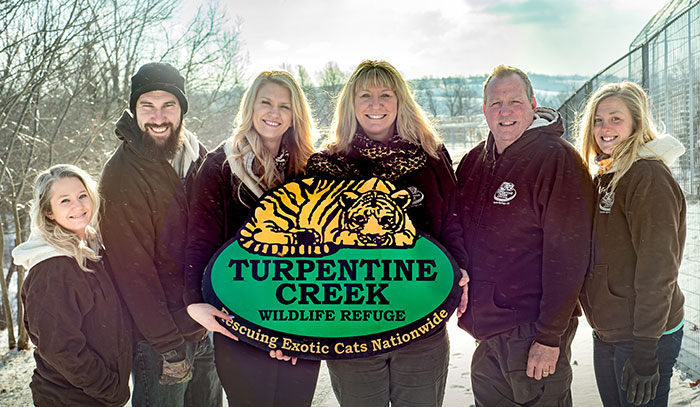 It’s a multi-generational family business, too. Don and Hilda Jackson, Smith’s parents, had two lions when she was growing up. That led to Smith and her husband, Scott, TCWR’s vice president, founding the refuge in 1992. Now, Smith and her husband are at the helm of the organization’s 34 paid staff, which includes four family members: son Victor is maintenance coordinator; daughter Miranda oversees lodging and hospitality; daughter-in-law Amanda handles the financials as treasurer; and the youngest, Haleigh, uses her sustainable horticulture degree to satisfy the refuge’s environmental sustainability initiatives.

Despite it being the family business, Smith said she’s running and promoting an organization she hopes will not always have to exist.

“Our No. 1 goal is to end the exotic pet trade in the United States,” Smith said. “Most people just have no idea how damaging that multi-billion-dollar business is to these tigers, lions, panthers and other large cats — what the animals endure. So we teach people about the problem, and how we help.” 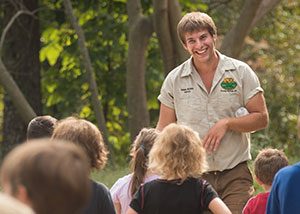 Hannah Wherry, TCWR’s new education intern, gave us a private tour. A post-graduate intern, she and 15 other interns live on-site earning $50 per week and do some of everything, from assisting the staff with feedings to processing meat. 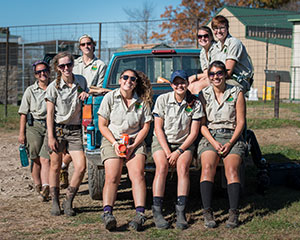 Earning one of the intern positions at Turpentine Creek is super competitive; more than 100 college graduates in such fields as zoology and animal conservation apply from around the world when there is an opening. photo by Ike Wever, TCWR

The tigers can each eat up to 15 pounds of meat a day. Much of the food comes from donations from Tyson Foods (which donates 300,000 pounds of meat a year), as well as from Walmart, Sam’s Club and some local farms and rendering facilities, a huge boon to helping TCWR stay open.

We drove slowly by all the habitats as Wherry told us the particulars of the animals inside: why lions have manes, and that the darker the mane, the more dominant the lion. We visited the massive ligers (combination lion and tiger), leopards and cougars. The majestic animals took our breath away. Yet, Wherry pointed out things we missed on first glance; trademarks of the exotic pet trade. Roman is cross-eyed, and Daniel is missing an eye. Others walk with strange, uneven gaits from malformed bones or injuries. White tiger cub triplets Rocklyn, Black Fire and Peyton had Metabolic Bone Disease when rescued in 2016. They were in severe pain and unable to walk from being undernourished and over-handled in the lucrative, but dangerous for the animals, cub-petting business. After a year and a half in TCWR’s care, they now run and play like normal tiger cubs. 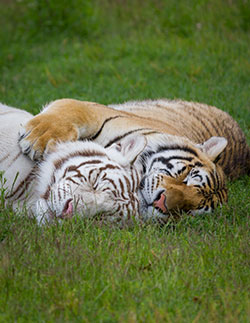 Aurora (white) and Joey cuddle in the sun. Both tigers came from the Colorado rescue in 2016. photo by Lisa Brinker, Turpentine Creek Wildlife Refuge

In September 2016, Smith learned of a Colorado breeding facility with 115 large animals that was closing. To spearhead the rescue and to care for the animals properly, Smith and half of her staff moved to Colorado for six months while they sought out certified sanctuaries that could assist in the effort. Working with Tigers in America and the legitimate sanctuaries that would ultimately form the Big Cat Sanctuary Alliance, TCWR found permanent homes in 10 states for all the animals. In the end, TCWR staff brought 32 animals — including one brown bear and four black bears — to Eureka Springs. The rescue was the largest in U.S. history. Several more rescues are expected soon, Smith said. 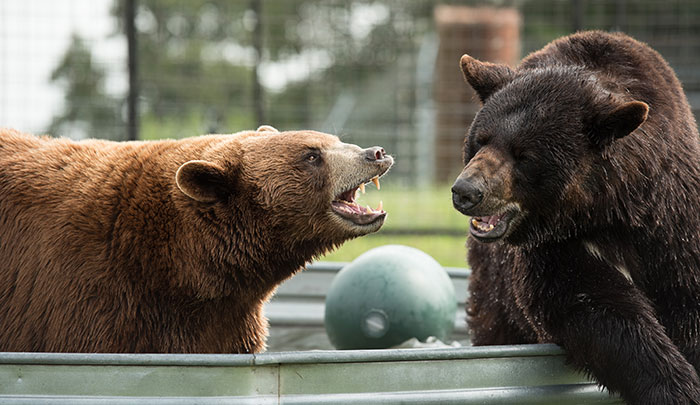 Thunder and Harley cool off in their pool. Though primarily a big cat rescue, TCWR cares for two species of brown bear and 11 species of black bear. photo by Ike Wever,TCWR

The frolicking bears were an unexpected delight on our tour. Because they require so much mental stimulation, the staff devise extra toys for them to play with and often hide items covered in strong scents for the bears’ stimulation and enjoyment. “If you have unused spices or perfume, donate them to us!” Wherry said. “Chanel No. 5 is by far their favorite scent. They also are big on Calvin Klein’s Obsession.” 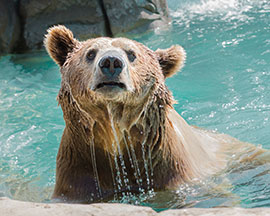 TCWR is building a bear habitat, encompassing 140,000 square feet of natural Ozark Mountain woodland. Popper, a wild Florida black bear who became a nuisance animal when she attacked a woman who came between her and her cubs, will live in the new bear space, along with Holli and Lolli, two litter mate black bear cubs from the Colorado rescue effort. While the bears will still be fed by staff, TCWR will be conducting scientific studies of how the bears interact with the natural forest. “Because Popper was once wild, we are hopeful that she can teach the cubs how to be real bears,” McCormack said.

The scope of the problem

McCormack said that of the very conservative estimate of 10,000 exotic cats living in the U.S., only six percent are in responsible zoos or sanctuaries. Besides private ownership, many are in the entertainment industry in some form. They often end up as pets. Smith said many private owners don’t realize what they’re committing to when they get one.

“I could tell you stories for days, but I prefer to focus on the positive difference we make,” said McCormack. “My absolute, favorite thing is watching the animals learn to trust humans again. They are fearless, apex predators, but when we see animals cowering when humans approach, that’s a sign they have been severely broken by people. After a few weeks, they start to understand that we are here to care for them, not hurt them. And they begin to look forward to seeing and greeting us. That’s the most rewarding part for me. They come here, and that suffering is over.”

Smith said helping starts with visiting, including staying overnight if you can. As for the units themselves, TCWR’s “Africa in the Ozarks” lodging options include five small Safari lodges (beautifully decorated, with scenic overlooks and a shared central gazebo with firepit and hot tub), two family-size suites, a treehouse bungalow, two permanent tents with flooring and other amenities, and several RV and camping spots.

“So many people want to help after they’ve been here, however they can,” Smith said. TCWR keeps an Amazon wishlist on its website of donation needs, ranging from office supplies to farm tools.

Even if laws were changed today, Smith said TCWR would still be needed well into her grandchildren’s lifetimes, as big cats can live more than 20 years, and the overbreeding won’t stop immediately. But it can end.

“I believe in that future,” Wherry said. “We’ve made these amazing, gorgeous creatures depend on us entirely; we owe them lifetime care and respect. But first, we ask people to please visit, to see for yourself, look into their eyes. Their eyes say it all.”