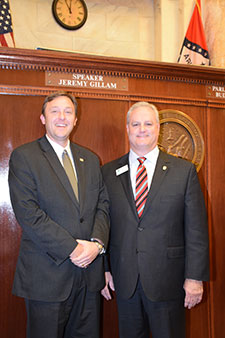 As we ring in a new year, our state legislators will be convening in Little Rock to begin the 91st Arkansas General Assembly. Our state Legislature meets in regular session every other year in odd-numbered years. The House of Representatives and Senate will once again be led by Speaker of the House Jeremy Gillam, R- Judsonia, and Senate President Pro Tem Jonathan Dismang, R- Searcy. The Majority Leader in the House is Rep. Mat Pitsch, R-Fort Smith, and the Majority Leader in the Senate is Sen. Jim Hendren, R-Gravette.

Many issues will be debated, including tax cuts and/or tax reform, education funding, health care as it relates to the “Arkansas Works” program, highway funding and the complex issue of how to implement the medical marijuana program approved by voters last November.

One issue we will be monitoring very intently on your behalf involves the attachments on your electric poles — which are private property owned by you as an electric cooperative member — by cable and telecommunications companies. As you may recall, in the 2015 legislative session, there was an attempt by these companies to legislate the price they wanted to pay to rent space and attach to your poles. As you know, we must allow entities to attach to the poles. However, there are countless incidents of damage to our facilities, unsafe attachments that get pulled down by autos or farm equipment, or unauthorized attachments that are never reported to the cooperative. For these reasons, and the associated costs, this is a very problematic issue. The good news is we managed to stop this bill in 2015.

It would have, conservatively, cost rural Arkansans up to $6 million for the benefit of these cable and telecommunications companies, a few of which are billion-dollar conglomerates.

Both parties agreed to allow the Arkansas Public Service Commission (APSC) to develop a formula rate fair to both sides. The APSC did and issued a ruling. The cable and telecommunications companies rejected it and asked for a re-hearing. The APSC denied that request. The mission of the APSC is to balance the interests of utilities and ratepayers. They did their job well and remained true to that mission. We hope this matter is settled and behind us, but we will be watching closely. I like what a longtime co-op director once said: “By the time the co-op bears the cost of buying, treating, transporting and erecting the pole, the cable companies should send a thank you note every time they attach for a nominal rental fee. If not, they can put up their own pole.”

Another issue we will be tracking involves the ability for electric cooperatives to deploy broadband if they wish to do so. High-speed internet service is no longer just a luxury for some; it is a necessity for businesses and individuals. When I use the term “broadband,” I am referring to true, high-speed service that makes a difference in economic development and provides our children the competitive advantages to compete in their educational efforts with children from other areas of the country and world (100 megabits per second, 1 gigabit per second, etc.).

Some telecommunications companies accept funds from the government, in some cases from “fees” on your phone bill via the Universal Service Fund or Arkansas High Cost Fund, and deploy at speeds of 2, 3 or even 10 megabits per second to claim they are giving you broadband. Now, it is true that some broadband is better than no broadband; however, these companies have the capacity and ability to provide the high speeds that could make a difference. Broadband should work much like the electricity in your home. You should be able to use multiple devices at the same time with no limitations. For example, you would never come home and turn off all your lights so you could run the clothes dryer, or turn off all your appliances so you could use the vacuum cleaner. That would be absurd! But it is exactly how the broadband infrastructure has been built.

I applaud Speaker Gillam and Sen. Dismang for their leadership and vision in this effort, and their desire to move our state forward.

As we advocate for you, the member-owners of the electric cooperatives, you can be assured we will do so keeping in mind the mission and principles that involve keeping your rates affordable while providing the highest possible level of service.