They appear as if by magic — leafless stalks shoot out of the ground, and then a flower opens. These welcome surprises bear the common names of Surprise Lilies, Naked Ladies, Resurrection Lilies or Magic Lilies — but all of them are Lycoris.

Lycoris bulbs are steeped in history, and are supposedly named for a Roman actress and mistress of Mark Antony. These members of the amaryllis family have their roots in China, where they have been grown for centuries. They are a common pass-along plant in our Southern gardens. While there are numerous species of Lycoris, the two most commonly appearing in our gardens are Lycoris radiata and Lycoris squamigera.

Lycoris bulbs are unique in that their foliage and flowering cycles are independent of each other. Leaves appear in one season, grow for several months, then die back. Following a rest period, the leafless stalk emerges with the bouquet of blooms at the top of the naked stalk — thus, one of its common names, Naked Ladies. The two species also bloom at different times, so planting both in the garden extends your bloom season.

Lycoris squamigera is the first of the Lycoris to bloom. It produces large, strap-like foliage in late winter to 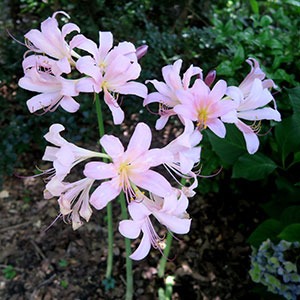 The pink, trumpet-shaped blooms of Lycoris squamigera, one of the two most common species of Lycoris in Arkansas gardens.

early spring. By early to mid-June, the foliage has totally died down. In mid- to late-July, 2- to 3-foot stalks appear with large, trumpet-shaped pink blooms. This variety is most commonly called Naked Ladies, but common names vary by gardener. After bloom, the stalk dies down. Then, a month or two later, the red-flowered spidery bloom of the Lycoris radiata opens up.

Lycoris radiata — the red-flowering Surprise or Spider Lily — has a different season of growth. The small, narrow, strap-like, blue-green leaves emerge typically in the fall, then die away in early spring. Then, seemingly out of nowhere in late August through September, the 15-inch spikes emerge from underground, topped with a spidery  open red flower. After the flowers fade, the leaves emerge again and persist until spring, producing food for next year’s flowering. The red form sometimes skips a year of bloom if the foliage gets damaged during its longer growing season.

There are numerous other species of Lycoris, with flower colors ranging from yellows and oranges to pinks, reds and whites. These less-common species are not widely grown or readily available, but they are worth the effort to try to find. They include: Lycoris chinensis, with lovely yellow flowers; Lycoris longituba, with nearly white trumpet-form flowers; and Lycoris sanguinea, an earlier-blooming, orange-red flower on a shorter plant. Lycoris sprengeri is a smaller flower than the others, but more than compensates with its vivid color scheme of pink ground color with an electric blue highlight on the petals. A lovely pale yellow variety is Lycoris caldwellii, which blooms in late September through October.

As a rule, Lycoris bulbs don’t like to be disturbed. When you receive new bulbs, plant them as soon as you 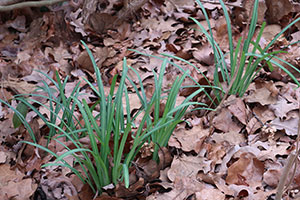 Lycoris bulbs are unique in that their foliage and flowering cycles are independent of each other.

can. If you are digging and dividing old plantings, it is best to do so as the foliage is declining in the spring. When you dig, replant the bulbs as soon as possible, trying to keep the roots intact, moist and healthy. Be careful where you plant them; you don’t want to mow down the foliage when it is actively growing, since this is when they are generating the energy to bloom.

Plant the bulbs 3 to 4 inches deep in a well-drained soil in full sun to partial shade. Since the foliage grows before the leaves have fully formed on your deciduous trees, they will do well under deciduous shade. Once planted, leave them alone; they pretty much take care of themselves. You can fertilize lightly in the spring when the foliage is up if you get the urge.

Seed pods will occasionally form after bloom. While they will grow from seed, it can take up to 6-12 years for a seed-grown plant to reach flowering size. This could account for some of those extra surprises that magically appear in years to come, but I am not that patient. They are best propagated through division.

Lycoris bulbs are poisonous, so deer tend to leave them alone — another bonus for many Arkansas gardeners. These bulbous plants can last for many years in the garden, giving us a boost of color with very little care; in fact, benign neglect is more to their liking. Be aware that they may not bloom for a year or two after division or replanting — but that just makes them more of a surprise when they do bloom.