— Little Rock native Douglas MacArthur in a speech after retreating from the Philippines during World War II.
He and Allied troops did return, more than two years later.

With new porches, new interior, new HVAC and new lighting, the MacArthur Museum of Military History is ready for its inspection. After promising it shall return, the museum — like its namesake — has done just that. Chip Culpepper, who is chairman of the board that oversees the MacArthur museum, rightfully called the $1.55 million in renovations for the 178-year-old building “massive.”

“It’s never looked better,” Culpepper said — and he means that literally. The improved lighting has allowed existing exhibits to be better-seen, he said, while other renovations have allowed for more exhibit space. Culpepper noted the lights are motion-controlled and energy efficient. “This was truly a labor of love,” he said.

A building for the ages 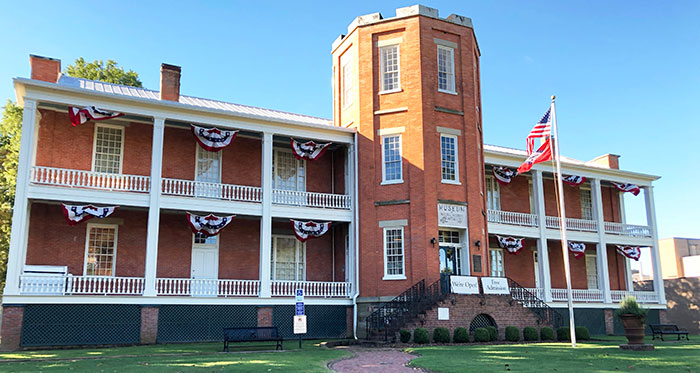 The Tower Building at the MacArthur Museum of Military History recently underwent a $1.5 million renovation. photo by Sheila Yount 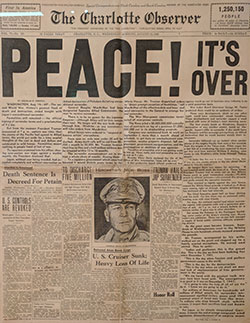 A newspaper announcing the end of World War II is among the museum’s many artifacts.

Owned by the city, the building housing the museum has seen a lot of history go past its doors — the pain of war, the hush of a library, the roar of weather. In 1999, it was in the path of tornado-producing storms that swept through southeast Little Rock. Many historic buildings were lost in those storms.

The MacArthur Museum of Military History is part of Little Rock’s historic MacArthur Park, although the building is decades older than even the park, which is the city’s oldest. It was built in 1840 — just four years after Arkansas gained statehood — and was named the Tower Building due to its shape in front. The structure originally was the main building of the U.S. Arsenal in Little Rock, and served later as the launch-site of the United States’ Camden Expedition against the Confederates in the American Civil War. When the building was decommissioned in the early 1890s, the federal government and the capital city made a trade — the Tower Building and its land for a thousand acres north of the Arkansas River. That parcel became Fort Roots, located in what is now known as North Little Rock, but was then part of the city.

The Tower Building’s second floor was once Little Rock’s first public library, among the structure’s many civic uses over the decades. The building was placed on the National Register of Historic Places in 1970; the entire district was placed on the Register in 1977.

MacArthur and his museum

The Tower Building was being used as married officers’ quarters when Douglas MacArthur, future five-star general and de facto ruler of occupied Japan for six years, was born there in January 1880. Douglas’ dad, Arthur MacArthur Jr., was a U.S. Army captain stationed there. The two later became the first father and son to have each been awarded the Medal of Honor; Arthur’s for actions in the Civil War, and Douglas’ for serving in World War II.

As the younger MacArthur achieved military fame more than six decades later leading the Allied troops to victory over Japan, a movement arose to rename the municipal park that was his birthplace after him. The notion was spearheaded by novelist and journalist Bernie Babcock. 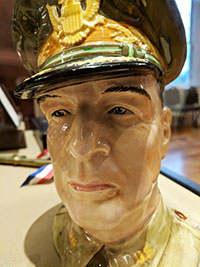 A bust of Gen. Douglas MacArthur is among the many exhibits at the MacArthur Museum of Military History.

Among her many good works in the state, Ohio native Babcock was a folklore editor for the Federal Writers’ Project, a founding member of the Arkansas Historical Society, and publisher of an Arkansas-focused magazine. She had founded the Arkansas Museum of Natural History and Antiquities in 1927 in Little Rock as a response to noted cultural critic H.L. Mencken’s humorously scathing essays regarding the state. Before the U.S. joined World War II, which called then-retired MacArthur back into active duty, Babcock’s museum had found a permanent home in the Tower Building in 1941. “A quality museum,” she wrote, would “belie the state’s reputation as a cultural backwater” and “show ’em.”

In 1952, while mulling a presidential run, MacArthur made his first and only trip back to Arkansas — he was under 2 years old when the family left Little Rock. MacArthur stayed only a few hours in the state on that March 24. He participated in a dedication of a rose garden at the city park that had been renamed in his honor, saying, “I have always held Little Rock and the state of Arkansas in deep reverence.”

The museum’s reopening this fall after nearly a half-year of renovations ties in with the 125th anniversary of 36-acre MacArthur Park, which includes the Arkansas Arts Center in addition to a fishing pond, walking trails, a large and lively dog park and more. The old 1917 fire station located in the park has been turned into the Firehouse Hostel and Museum.

For decades, the Tower Building housed Babcock’s museum of science and history. Later, that museum merged with the Little Rock Children’s Museum to become the Museum of Discovery, which relocated to the city’s River Market District in the late 1990s.

Following that change, and the tornado, “we had a blank canvas,” Culpepper said, regarding what to do with the historic structure. A subsequent push was made to honor not only MacArthur, but the state and its history at the Tower Building. Since 2001, it’s been home to the MacArthur Museum of Arkansas Military History.

A Department of Arkansas Heritage grant funded the renovation of the building’s big porches —  the only state money involved in the project, he noted. The City of Little Rock’s 2 percent hotel and restaurant tax funded the rest.

After 178 years of service to Arkansas and its capital city, the Tower Building is back in business. “It’s like closure,” Culpepper added, “but a beginning again!”