It’s about 6 p.m. on Christmas Eve in the halls of St. Bernards Medical Center in Jonesboro. There’s a feeling of 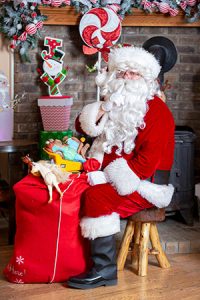 The Exchange Club of Jonesboro raises funds for Barry Forrest and family to fill Santa’s toy bag with surprises for the sick children. photo Karen Segrave

anticipation in the air as hospital staff begin congregating to get a glimpse of (and maybe a picture with) the new visitors: namely, Santa, Mrs. Claus, a couple of tallish elves, TV and newspaper reporters and some other festive well-wishers. Just beyond them in rooms along the ward are the unsuspecting children and their families, about to be visited by a toy-laden Santa and his band of merrymakers..

Such is the scene described by Santa himself, Barry Forrest, who continues a tradition started by his father, James W. Forrest, and the Exchange Club of Jonesboro nearly 50 years ago. James began bringing toys purchased with funds from the Exchange Club to children in the hospital on Christmas Eve in the early 1970s. James continued delivering Christmas joy to the hospitalized children every year until he had a fatal heart attack in 1986. That’s when Barry stepped into Santa’s boots, determined to keep the magic of Christmas Eve alive for the kids. Today, the visiting Claus family includes Barry and his wife, Dana, (members of North Arkansas Electric Cooperative) and two of their three grown children, Cody Forrest and Ashley Cheney, who have been accompanying their dad for about 20 years.

“We make it a whole family tradition, dressing up for the kids,” Ashley says. “Cody and I don the red-and-green costumes and have hats with the ears sewn on them, and I have little elf shoes that jingle. We do the whole shebang.”

Cody says the attention to detail helps make the visit real for the wide-eyed children: “We try to get it as close as we can for them.” Here’s how it happens.

Every Christmas Eve, at about 4 p.m., Barry calls St. Bernards and NEA Baptist Memorial Hospital to find out 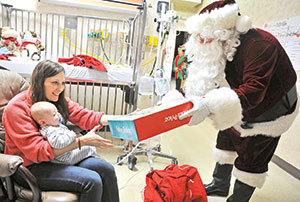 Santa brings a shiny new toy to an infant and mother on Christmas Eve in the hospital. photo Courtesy of Jonesboro Sun

how many children are spending Christmas Eve there. “They can’t tell me the names, of course, but they let me know their ages and if they’re a girl or boy,” Barry explains. Once they have that information, the family heads to Walmart to buy the toys — funded by the Exchange Club — including a few extra in case the families have other young siblings with them. They put the toys into Santa’s bag, then head to the hospitals by about 6 p.m. to begin the surprise visits.

“Every year it falls together real fast,” Barry says. “We’ll go in through the Emergency Room and see if there are any kids there and hand out candy canes to the doctors and staff. Nobody wants to work on Christmas Eve. Let me tell you, there’s nothing more dreary than Christmas Eve night in the hospital. Those people are heroes up there for doing that.”

Exactly how many visits they make can vary widely. Some Christmases they’ve had as many as a dozen kids to visit. A couple of years, Barry says, they’ve been blessed to have no children hospitalized over Christmas.

“Usually the kids in the hospital are very sick,” Barry says, “because the doctors want them to be out of the hospital for Christmas if they can be. They work hard to let them go home if it’s safe. So, it really does cheer them up.” 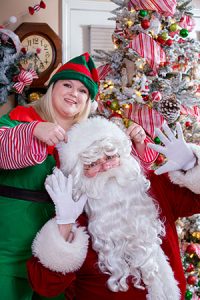 “Every year’s different, and every year is always good,” Cody says. Cody now lives in Batesville but spends Christmas in Jonesboro to be part of the family tradition. “You never have a bad experience when you see little kids’ eyes light up from seeing Santa Claus.”

The kids are often full of questions for Santa, such as, “Did you fly the reindeer to the hospital?” (No, they’re

waiting at a hangar at the Jonesboro airport so the radar doesn’t detect them.) Or, “Do elves fight like me and my brother?” (Yes, all the time, but they don’t have as far to fall when somebody falls down.) Or, “Why aren’t the presents wrapped?” (The elves make the toys, but they’re lousy at wrapping gifts.)

Ashley says that while her dad inherited the role from his dad, it fits him as well as the Santa suit. “My dad is just a joyful soul. He can make anybody laugh and make anybody happy. It’s the perfect job for him because he is a little jolly person,” she says with a laugh. 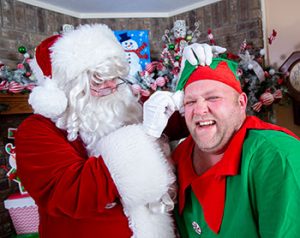 Cody has committed to taking over as the Christmas Eve Santa when his dad retires. It’s a role he’s been studying most of his life.

“On Christmas Eve when I was a kid, we always went to my grandparents’ house,” Cody says. “Dad would always leave early after we had our afternoon festivities. As a young kid I never really knew why he was leaving. I was probably 12 or 13 when I started going to the hospital with him, after he explained what he was doing and told us stories of how the presence of Santa Claus helped these kids in the hospital who weren’t doing so good and maybe needed a little joy. He told us about how Santa Claus has helped them, and it got us excited about going.”

Ashley says the first year she went, when she was 10 or 11, there was only one child to visit, but the experience made a big impression on her. “Being that age, it may sound selfish to some ears, but you want to be at home opening your own gifts and getting ready for Santa,” she says. “But just seeing that one child in the hospital, from a 10-year-old’s perspective, it was really fulfilling to realize, ‘Oh, there are some kids that don’t have the same opportunities we do on Christmas.’ I was glad we could make someone else happy instead of just ourselves. Now we look forward to it every year.”

She says, “Sometimes only Dad can go in the child’s room because they’re super sick. Then he comes out and tells us all about it, and it still makes our hearts feel joyful.”

Good tidings we bring to you and your kin

Ashley tells of a visit to a very ill child that particularly warmed her heart a couple of years ago. “He was in bed 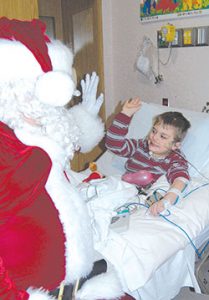 and didn’t want to be touched, talked to, anything, because he just didn’t feel good and was sad,” she says. “When we went in there, it was like, ‘Oh my gosh, there’s Santa!’ And he lights up. We were able to give him and his brother toys. Their parents were almost in tears because they didn’t think they were going to be able to afford a Christmas with the hospital bills adding up. That’s one of my favorite memories, just seeing the joy on the parents’ faces along with the child’s.”

Barry says the stressed-out parents who have been at the hospital with their child instead of home preparing for Christmas seem to get almost as much out of the visits as the kids. “It’s just something good that’s happening that they don’t know is going to happen. But miracles happen at Christmas,” he says. “That’s what makes it magical.”

Do you believe in Santa?

The other 364 days a year Barry works as president of Forrest Office Machines, a business his father started in

1965. He says he always tells people, “God looks after idiots like me.”

One example of that, he says, is what happened one Christmas when he and his kids were shopping for a gift for a 16-year-old boy who had become septic after an appendectomy. “We’re more used to shopping for 4- or 5-year-olds,” Barry says. “But we were walking through Electronics, and something just hit me. I said to Cody, ‘Grab those headphones up there.’ He said, ‘Dad, those headphones are $100.’ I said, ‘I don’t care. Go ahead and get them.’”

That year when they got to the hospital, he says, the Jonesboro Sun had sent a reporter who clearly didn’t seem to want to be working on Christmas Eve. He asked her if she believed in Santa. When she said no, he asked her, “You don’t really want to be up here, do you?”

“Well,” he said to her with a smile, “You should always believe in Santa, because Santa knows about everything.”

Barry says when they went into the 16-year-old’s room, he asked the boy the same question: “Do you believe in Santa?”

“He said, ‘Naw,’ so I told him, ‘Well, that sure is funny. I really think that you wanted these headphones for Christmas. And you’ve been in here quite a while, so I don’t know if your mom got you any or not, but Santa knew that you needed these headphones.’

“I looked over at his mother, and she just lit up like, ‘How did you know that?’”

Barry says the reporter stayed behind talking to the mom, who asked her, “Who was that?” The reporter looked

at the mom and asked, “Did you not tell him to get the headphones?” She said, “No! But that’s exactly what my son wanted for Christmas. We’ve been up here, and we haven’t had time to go buy Christmas presents.’

“The reporter walked out and looked at me and asked, ‘How did you know that?’” Barry says. “I said, ‘I told you. Santa knows everything, and you should always believe in Santa Claus!’ She comes every year now. I ask her every time, ‘Do you believe?’ And every time she says, ‘Absolutely!’” 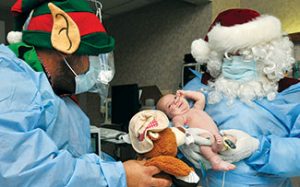 A different kind of Santa suit: Santa and an elf gown up to introduce this newborn to the magic of Christmas.photo Courtesy of Jonesboro Sun

80 stitches in her face from being mauled by a dog.

“She’s this little girl with all these stitches on her face, and they told me she hadn’t eaten in a week,” he says. “So, I spent about two and a half hours in that room. I held her and fed her ice cream and talked with her.

“That visit made a lasting impression on me. What really did it was about 15 years after that, I get a phone call Christmas morning. It’s a girl, and she says, ‘Are you Mr. Forrest?’ I said, ‘Yes, I am.’ And she said, ‘Are you the one that visited the hospital?’ I said, ‘Yes, I am.’ She said, ‘You don’t know who I am, but you came to see me one time. My face was all messed up when I was a little girl because I’d been dog-bit, but I sat in your lap and ate ice cream. I’ve never forgotten that.’

“It’s phone calls like that that make this so meaningful,” he says.

No one’s quite sure what the Christmas Eve visits will look like during this year’s pandemic, but the Forrest clan is happily anticipating making more spirits bright.

Ashley says, “You know, 2020’s been a pretty bad year, so hopefully we can make a child happy and make them smile on Christmas with something shiny and new. It’s not a lot, but everybody needs a little goodness in the world, especially at Christmas.”