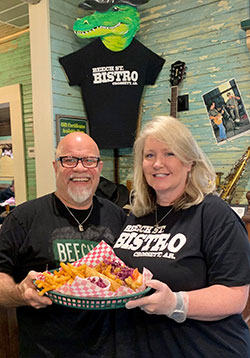 The motto at the Beech Street Bistro in Crossett is “Shine where you’re at,” and the establishment does just that under the direction of owners Chester and Laura Huntsman.

Opening the quirky joint was a dream the couple realized in 2018, after they spent a year and a half lovingly and thoughtfully renovating a 100-year-old home that Laura’s father gave them. Chester repurposed wood and other interesting décor throughout the warm, inviting space that’s full of personality. Everywhere I glanced, I noticed something else that fascinated me, like the bistro’s artwork, created by local residents Denise Morris and Sheila Dickerson.

Prior to the restaurant opening, Chester’s recipes were in his noggin, not on paper.

“He never had a written recipe for anything until we opened the restaurant,” Laura said with a grin. “We had to get the measurements for the ingredients, so we could ensure consistency.” This included the recipes for all seasonings, as Chester prefers to create his own. General manager Jeremey Hensley, another restaurant veteran originally from Crossett, appreciates the measurements, as he works to keep the eatery running efficiently. 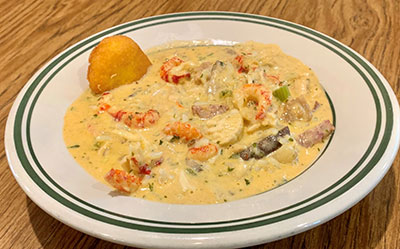 Chester will make sure you get a nice serving of hot water cornbread and melt-in-your mouth, buttery yeast rolls once you are seated. As I was enjoying the cornbread, an order of Me-Oh-My! Crawfish Pie — a hearty bowl of crawfish potpie filled with cheesy, creamy, spicy Creole perfection — was delivered. Chester’s recipe includes crawfish, chicken and smoked sausage with a homemade, flaky crust.

The Fried Creole Shrimp Po’boy was also some kind of good! The sandwich featured crisp, golden fried shrimp on a warm, po’boy-perfect pistolet 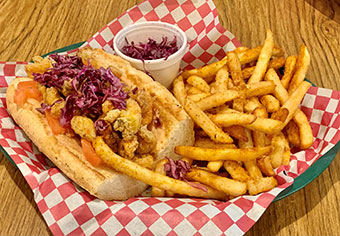 bun from New Orleans’ famous Leidenheimer bakery. The homemade remoulade was outstanding, and a secret-recipe strawberry-vinaigrette slaw provided a flavor that begged for me to take another bite. Which I did again and again. The establishment prides itself on its legendary, homemade onion rings, as well it should; they are works of culinary art.

The Pork Chop Sammich, featuring a fried pork loin positioned on a jumbo sesame seed bun with lettuce, tomato and pickle, was a beauty. The beaucoup bun looked small compared to the pork loin, and the flavor made me shout, “Laissez les bon temps rouler!” The Sammich was accompanied by Beech Street Bistro Creole Fire Fries, which are like little potato firecrackers!

I sampled the Chicken and Dumplings, my favorite comfort food, and I can attest the recipe at Beech Street Bistro is one of the best. Chester’s take on this Southern staple took me back to sitting at Grandma Emmons’ kitchen table. It is loaded with slow-simmered chicken and hand-rolled, homemade dumplings in a rich broth. Trust me on this one. You will want a few bowls to take home and enjoy later. 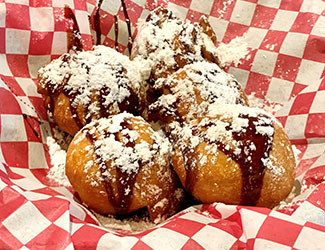 The Zydeco Cheesecake, one of Chester’s creations, was originally going to be bread pudding. I was told the story of its origin, and I’m sure Chester would share it with you. If you love bread pudding and you love cheesecake, you will adore this unique dessert.

What Creole restaurant would be true to its mission without freshly prepared beignets? The Beech Street Bistro checks the box for outstanding, unique beignets with Blueberry Cheesecake and Chocolate S’more options. 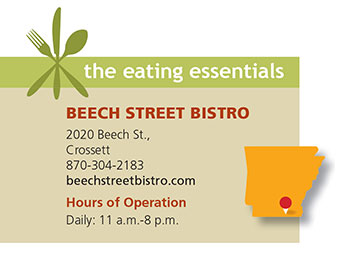