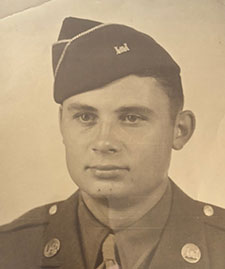 Charles A. Dumas, age 19,  served as an Army private first class in a combat engineer battalion.

He didn’t want to talk about it. Charles A. Dumas, like many World War II combat veterans, simply wanted to move on with his life.

It took his grandchildren two years to convince him to watch Saving Private Ryan, a 1998 film with a riveting opening scene depicting the June 6, 1944, beach landing at Normandy, France. Though difficult, watching the film helped Dumas open up about his experiences. At age 93, Dumas, who has lived in Heber Springs since his retirement, recently conjured those memories again. In interviews for a veterans’ history project and later with Arkansas Living, he bravely shared how 74 years ago this month he was part of the largest seaborne invasion in history.

Dumas was 17 years old, living on his family’s farm in Pope, Alabama, when the Japanese bombed Pearl Harbor on Dec. 7, 1941, pulling the United States into World War II. He heard the tragic news on the family’s Philco radio. “I thought, ‘Oh my God.’ We’d never heard anything about Pearl Harbor before …  It scared us all to death,” Dumas said.

Knowing he would soon be drafted, Dumas decided to enlist so he could choose the Army instead of being assigned to another branch of service. After he joined, he boarded a train for Texas where he went through basic training and was assigned to a combat engineer battalion. “I said, ‘What in the world are combat engineers?’ I came to find out that it was both,” Dumas said, adding that he switched roles depending on what was needed. If fighting was taking place, he was an infantryman. If construction was taking place, he was an engineer.

Preparing for the invasion

Dumas and the rest of his unit continued training in Texas before heading to New Jersey/New York to sail to Great Britain to prepare for the invasion. After sailing across the ocean on the Queen Elizabeth oceanliner with 15,000 troops, they landed at Glasgow, Scotland. They then camped near London. “We were free to roam around,” he said, adding that one night he and some of his buddies had just left a nightclub in London when the Germans dropped a “buzz bomb” on it, totally destroying the building and killing those inside. “Look how close to death that was for me,” he said.

As traumatic as that experience was, it would not compare with what was to come. Once he and his unit landed at Normandy, they encountered German troops. “After we got off the ship, it got pretty tight and I jumped into a foxhole,” Dumas said. “This German kid jumped right on top of me and my bayonet went right through him. That was the first time I came to grips with what was going on.”

“All I could see were these big blue eyes staring at me,” Dumas said. “I couldn’t get that out of my mind … For a long time after the army, I would go to bed a night and all I could see was this kid. It was terrible.”

Once the fighting stopped, Dumas became an engineer as his battalion moved on through France and into Belgium, doing road and bridge work. 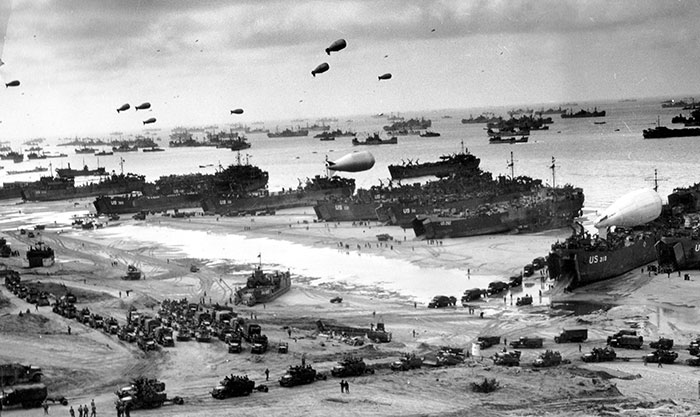 Battle of the Bulge

On Dec. 16, 1944, the Germans launched a surprise attack in the Ardennes, catching American forces off guard. Dumas’ battalion returned to Belgium from Germany to build defensive positions. Once that battle finally ended on Jan. 25, 1945, Dumas once again became an engineer as his battalion moved on to a position on the Rhine River in Germany, where they built bridges. They also built airstrips for gliders. His other duties included guarding German prisoners of war and even burying German dead. 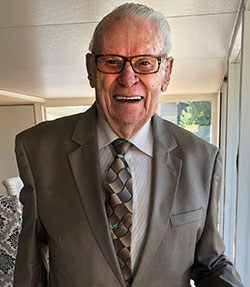 Seventy-four years after serving in the Normandy invasion, Charles A. Dumas enjoys his retirement in Heber Springs.

Once the Japanese surrendered in August 1945, Dumas’ battalion was free to go home. He recalled sailing into New York and seeing the Statue of Liberty. One soldier was so excited, he jumped off the ship to swim to shore. Tragically, he drowned.

From New York, Dumas made his way back home to Alabama where he started working at a clothing store. He later got married and lived in Memphis and Hampton Roads, Virginia, managing stores for Robert Hall Clothes. He later returned to Memphis where he lived and worked for about 40 years. While there, he discovered fishing on Greers Ferry Lake in Arkansas and the Little Red River. He loved it so much, he retired there.

He doesn’t fish much anymore, but he still enjoys life on the lake. And his gratitude for surviving the war remains as strong as ever.

“Mother and God saved me,” he said, his voice choking with emotion. “I don’t have any doubt in the world that between my mother and the Lord, I am here.”