Dec. 25, 1817, was a cold winter’s day on the Arkansas River. Far from their families and festivities, about 60 U.S. Army soldiers and four laundresses landed at the site where they would build Fort Smith. Their mission was to keep the peace between the warring Osage and Cherokee tribes, and the site was a rolling hill they called Belle Point, located at the confluence of the Arkansas and Poteau rivers. That afternoon, they commenced setting up “Camp Smith,” named for the rifle regiment’s commander, Gen. Thomas Smith. Their camp that Christmas Day would grow into a major U.S. outpost and Arkansas’ second-largest city. 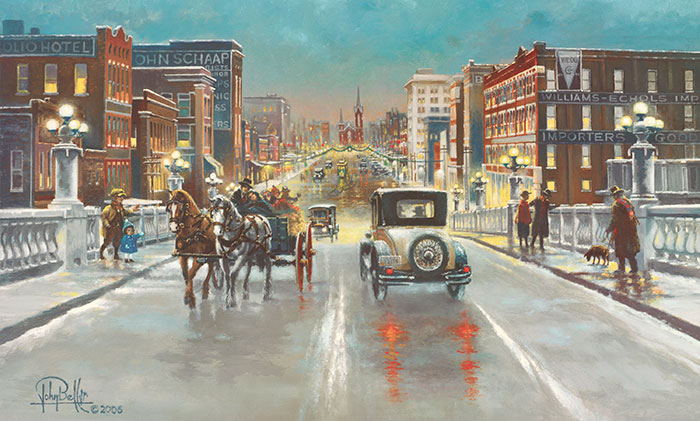 Fort Smith will honor the bicentennial of the establishment of that camp with an epic birthday party starting this Christmas Day and extending through 2018.

At 2 p.m., Dec. 25, locals and visitors will be taking a break from their family festivities to gather at Belle Point, now on the grounds of the Fort Smith National Historic Site. The first of dozens of planned Fort Smith bicentennial events in 2018, the celebration will include a re-enactment of the landing, then birthday cake and hot chocolate at the Fort Smith Museum of History’s soda fountain.

“We realize it’s a major holiday, but it’s also kicking off the biggest celebration in Fort Smith history,” said Claude Legris, executive director of the Fort Smith Advertising & Promotion Commission. “If you’re in the area, drop by for a Christmas memory you and your kids will never forget. It’s a once-in-a-lifetime thing.” 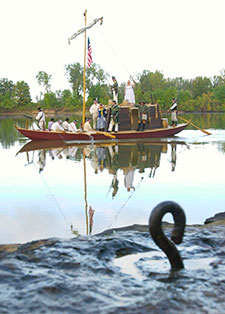 A re-enactment of the soldiers’ 1817 landing, like this one from 2005, is slated for 2 p.m. Christmas Day. photo courtesy of the Fort Smith National Historic     Site

Cody Faber, a park interpreter at the Fort Smith National Historic Site, and his colleagues daily tell stories of the First Fort, Second Fort and the Federal Court era that followed to many thousands of tourists who visit from all over the world. The stories are lively and fascinating, and include tales of Native American wars, the Trail of Tears, Gold Rush, Civil War, Deputy U.S. Marshals, the “Hell on the Border” jail, Judge Isaac C. Parker’s court, pioneers and outlaws, hangings and heroes.

Faber tells the story of how the city itself got started. In 1824, mission complete, the Army abandoned that first wooden fort, but settlements had already sprung up. The Army decided in the 1830s a permanent fort was needed somewhere in the area.

“When the Army left, a soldier named John Rogers stayed and bought a bunch of acres in the area for about $500. When rumors of a possible fort somewhere in Indian Territory began circulating in the 1830s, Rogers wrote to the War Department, ‘Hey, I have a lot of land here I can sell you for a great price!’ Rogers then sold his $500 of land to the U.S. government for $15,000,” Faber said. “Then the town really began to boom.” 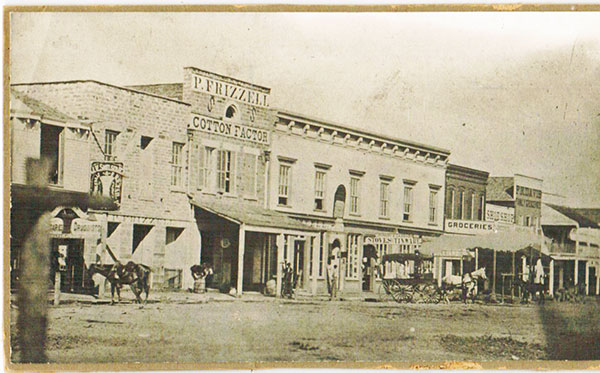 This photo of Garrison Avenue in Fort Smith, circa 1881, was one used by the producers of “True Grit” (2010) in re-creating the city for the Oscar-nominated production design. photo courtesy of the Fort Smith Museum of History

The Second Fort occupation began in 1838 and lasted through various missions until 1871. The following year the Army was replaced on the site by the Federal Court for the Western District of Arkansas, led most of its early years by Judge Parker. The court moved from the fort’s grounds in 1896, two years before a massive tornado leveled downtown buildings that had stood for much of the 19th century. 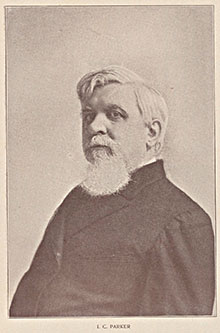 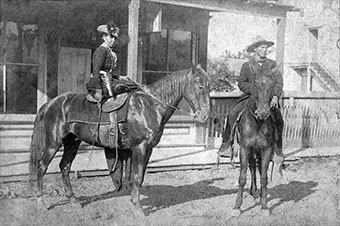 Infamous outlaw Belle Starr (on horse) was tried for horse thievery by Judge Parker (pictured at left).  He sentenced her to rehabilitation in Detroit. Photo courtesy of the Fort Smith Museum of History

Highlights from the second hundred years

The next 100 years were no less colorful. Pre-Prohibition, more than 40 saloons were operating downtown. In the early 20th century, a row of bordellos sprang up in downtown Fort Smith, where for years they were legal and regulated. One, Miss Laura’s Social Club, was restored and converted to serve as the city’s visitor center.

Under an alias, gangster Pretty Boy Floyd lived for months two doors from a Deputy U.S. Marshal who was looking for him. Gen. William O. Darby, founder of the U.S. Army Rangers, was a native son. Elvis Presley was processed into the Army at nearby Fort Chaffee, and made international news getting his famous hair shaved off for an Army buzz cut. (That barbershop is now a museum.) The infamous gangster couple, Bonnie and Clyde, hid out in a Fort Smith motel, recovering from a gunfight. The 1970s and 1980s saw Fort Chaffee become one of the nation’s primary processing facilities for Vietnamese and Cuban refugees, adding lasting diversity to the population. 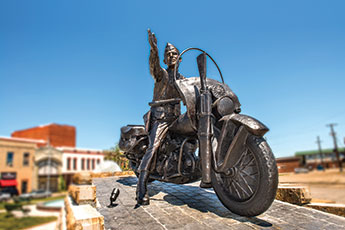 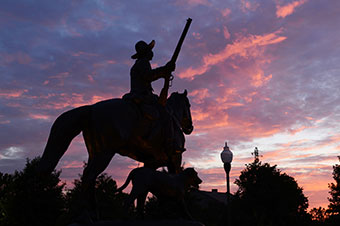 Today, most of the downtown’s historic buildings are restored and repurposed. Many now have vibrant, detailed murals painted on them by the internationally acclaimed street artists brought in by Fort Smith’s award-winning “The Unexpected” project.

“Warpaint,” by artist D*FACE brightens a wall at downtown Fort Smith’s The Park at West End.

The new public art has helped transform the almost 200-year-old downtown into a visually exciting, dynamic destination. Dozens of restaurants, cultural amenities, tourist attractions, parks and miles of trails now are part of the city’s appeal.

“People in Fort Smith are engaged and invested in this community,” Mayor Sandy Sanders said. “That’s what’s made our bicentennial planning so fruitful. We’re counting on the whole city’s involvement in the events we have planned for 2018.” 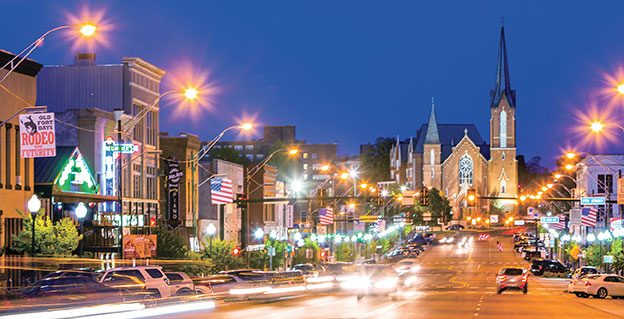 Fort Smith’s 2018 calendar is bursting with bicentennial events. Three years ago, Sanders began inviting community leaders to be part of a Bicentennial Committee. Jim Perry, a seventh-generation Fort Smithian on the committee, said the countless hours have been a privilege, not work. “I love Fort Smith,” he said, “and everything we have planned showcases Fort Smith’s vitality.”

Each quarter is dedicated to a theme. The first quarter explores Fort Smith’s culture of arts and history; the second celebrates its Western heritage; the third is full of homecoming events; and the fourth quarter looks to Fort Smith’s future. Other bicentennial projects are sprinkled throughout 2018. Dozens of “Bicentennial Minutes,” 60-second TV spots to air throughout the year on KFSM, highlight key moments of Fort Smith history. 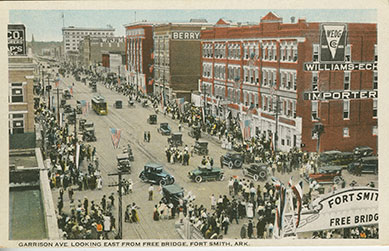 This vintage postcard illustrates the 1922 opening of the “Million Dollar Free Bridge” that spanned the Arkansas River from Fort Smith into Oklahoma, allowing toll-free passage for vehicles and pedestrians. Photo courtesy of the Fort Smith Museum of History

On March 3, the Fort Smith Convention Center will host an all-day cultural event celebrating the Five Civilized Tribes, whose history is intricately tied to Fort Smith’s. Perry said the Five Civilized Tribes Council enthusiastically signed on for demonstrations, performances, vendors and educational programs for the public. All five tribes — the Cherokee, Choctaw, Creek, Chickasaw and Seminole — are participating.

Elementary school principal Robyn Dawson has helped to organize the educational components for area schoolchildren. Among her favorite events she has helped plan are an oratorical contest for middle schoolers, a cardboard fort-building contest for kids ages 5-12, and a USO swing dance for adults.

“We want to engage the kids now in fun, meaningful ways so that they’ll remember being part of the bicentennial when they’re grown. We want them to be excited about their city,” Dawson said.

Reunions of all sorts are encouraged and planned for the third quarter’s homecoming theme, with the Mayor’s Fourth of July Extravaganza as its cornerstone event. “We are already getting the word out nationwide to anyone who has ever lived in Fort Smith, this is the year to come back for a visit,” Legris said, “They will be amazed at how much has changed.”

Wrapping up the bicentennial year will be a spotlight on Fort Smith’s promising future, including the national U.S. Marshals Museum, which will open Sept. 24, 2019. Legris said, “It was important to us that the entire fourth quarter be dedicated to exploring the possibilities and directions Fort Smith is headed towards in the years to come. The big, exciting question we all have to answer is, ‘What will they be celebrating about Fort Smith 200 years from now?’”

For more information about Fort Smith’s bicentennial, visit gofortsmithar.com.
More history can be discovered at nps.gov/fosm and at fortsmithmuseum.org.