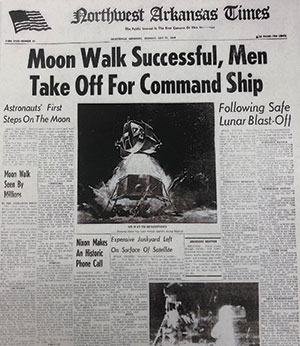 In July 1969, America did something amazing, and the world came together in wonder to celebrate human accomplishment. It’s easy to forget what a remarkable moment the Apollo 11 moon landing was for practically everyone on the planet. After all, anyone born in the last half century grew up with space exploration as basic fact. For at least two generations, the moon has not just been a bright orb in the night sky, but somewhere people have traveled. Yet until July 20, 1969, traveling to the moon had been the stuff of fiction and dreams.

Fifty years ago this month two American astronauts became the first humans to land a spacecraft on the moon. While the world watched on television screens and listened via radio broadcasts, Apollo 11 Mission Commander Neil Armstrong and lunar module pilot Buzz Aldrin landed Apollo 11’s lunar module on the surface of Earth’s moon. The third Apollo 11 astronaut, command module pilot, Michael Collins, orbited the moon for 21.5 hours, waiting to pick up his colleagues for the return flight to Earth, while Armstrong and Aldrin spent almost a full day exploring, conducting scientific experiments, gathering lunar samples and reporting back to NASA from the moon’s surface.

A new website allows the public to relive the moon landing from NASA’s perspective in real time. By visiting the 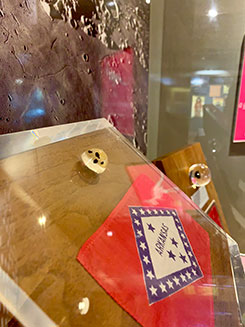 Moon rocks from the Apollo 11 and 17 missions are exhibited at the Museum of Discovery.

apollo11inrealtime.org, you can follow along (or jump to the good parts) with the audio, video and transcript as it happened, and can click different areas for a deep dive of information about the mission. Just listening to the audio, the tension as they maneuver the lunar craft to the surface is palpable. Finally, there’s a pause, then Armstrong announces, “Houston – Tranquility Base here. THE EAGLE HAS LANDED.” Mission Control in Houston immediately replies, “Roger, Tranquility. We copy you on the ground. You got a bunch of guys about to turn blue. We’re breathing again. Thanks a lot.”

The landing made big headlines in newspapers across the globe, including Arkansas. Above a photograph fresh from NASA of the lunar module sitting on the moon’s surface, the Arkansas Gazette’s main headline July 21, 1969, read, “First Men Land on Moon; Armstrong and Aldrin Cut Rest Period to Take Walk.” One subheading reads, “Flight of Module ‘Just Beautiful’ All the Way Down,” while another story reports on the world’s reaction: “Earthmen Unite, Dancing, Shouting, To Celebrate Feat.”

Armstrong and Aldrin collected almost 50 pounds of rocks, soil and other geological samples to be studied back on earth. Tiny samples of the moon rocks from Apollo 11 and the later Apollo 17 missions are on exhibit in Little Rock at the Museum of Discovery, part of its permanent collection. The Apollo 11 sample is four miniscule moon rocks (0.5 grams) suspended in lucite; the Apollo 17 moon rock is a single, larger sample. The display notes that Apollo 11 also included the Arkansas flag, carried to the moon and back during the mission.

Also of interest this month especially is a  2019 documentary, Apollo 11, featuring magnificent, never-before seen, large-format footage and previously unavailable audio from the mission. The movie is currently available to rent, buy or stream. However you choose to commemorate the 50th anniversary of NASA’s most celebrated mission, when you look up at the glowing orb in the night sky this month, give a thought to the mission that brought humanity together to celebrate one of mankind’s greatest achievements.