This spring, Arkansans will have a once-in-a-lifetime chance to view astounding artifacts from the nation’s African-American history as diverse pieces from The Kinsey Collection come to Little Rock to be exhibited at the Mosaic Templars Cultural Center (MTCC) on April 8 through June 30.

The center, at West Ninth Street and Broadway Avenue in the capital city’s downtown, is a fascinating and relatively new state-funded museum that chronicles the history and culture of black Arkansans. It is housed in the rebuilt, historic Mosaic Templars of America’s National Temple and headquarters, located in what was once the heart of Little Rock’s booming black business district.

Two former slaves, John E. Bush and Chester W. Keatts, built the original impressive four-story edifice on the site in 1913. As people who had emerged from slavery and transitioned into successful businessmen, the two men had a dream of leading the black community into the future. The fraternal organization they founded, the Mosaic Templars of America, served the needs of then-segregated communities and grew to have chapters in 22 states. On the temple’s opening day, thousands gathered to hear the famed Booker T. Washington speak at the event.

Heart of the community 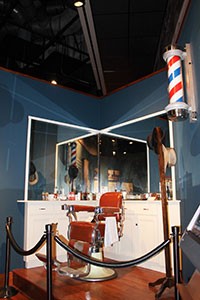 At the time, W. Ninth Street was a bustling place, full of black-owned businesses, hotels, dance halls, and most of all, people who gathered to share stories, news and customers. The Mosaic Templars National Temple not only housed the organization, but also numerous other successful black business endeavors. The first floor contained retail storefronts, and the building became home to the all-black Mosaic Hospital and its nursing school. A business publication was published there, and upper office space housed the insurance agency (the Mosaic Templars sold burial insurance to African-Americans), as well as doctors, lawyers and realtors. The grand ballroom and its balcony comprised the third and fourth floors. This building was the true heart of the community, a place of pride and progress for Arkansans who were black.

Quantia Fletcher, interim director of the MTCC, said the building’s very existence was inspirational in its day.

“If you can imagine at that time,” she said, “for such a magnificent structure to stand and be owned entirely by African-Americans who were former slaves, that was amazing.”

The building’s prominence dwindled over the years as the fraternity’s presence diminished and the city became increasingly racially integrated. By the early 2000s, state and community leaders were planning to restore and rehabilitate the then-empty building to create a state-funded center for Arkansas black history. Plans were still very much in the early stages, when a fire ravaged the once-magnificent structure and turned it into bricks and ashes.

Rising from the ashes 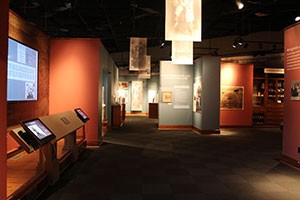 Undeterred from their mission, the leaders refocused their plans: they would build a new building on the site, using the original blueprint. From the ashes, they would give the historic site new life.

The newness lends the artifacts and stories told within the exhibits a freshness and contemporary relevance. This is not an old and dusty, musty museum. The MTCC is a dynamic, active place, full of community arts and educational programs, professionally designed and interactive exhibits, and regular visitors from across the nation. Fletcher said her favorite part of the MTCC is the ever-changing selections of African-American art on display.

The re-created drug store exhibit makes clear how much medicine has changed in the past 100 years.

As you walk through the museum, the exhibits tell an important, compelling story of Arkansas communities persevering through slavery, the Jazz Age, both World Wars and the Civil Rights Era. Banners of enlarged historic photographs and a massive timeline along the upper wall weave throughout the museum. Video and audio elements integrated into the displays provide a sense of stepping back in time as they showcase the growth of the West Ninth Street community.

Upstairs is the ballroom, balcony and the Arkansas Black Hall of Fame, which inducts several amazing Arkansans into its hall each year.

Visiting the MTCC this spring is the Kinsey Collection, which has been exhibited at the Smithsonian Institution and currently at Epcot Center in Orlando, Fla. It is the property of Shirley and Bernard Kinsey of Los Angeles, collectors of the most extraordinary art and artifacts of African-American history and culture that they can find.

Among the “show-stopper” items Fletcher described in the Kinsey Collection are artifacts from the Dredd-Scott U.S. Supreme Court decision, a Florida marriage license between two black people from the 1500s, African-American artwork from the 1800s, first editions of major works from famous authors including Zora Neale Hurston, and of the book from which the 2014 Best Picture Academy Award winner “12 Years a Slave” was adapted.

“Our museum is still fairly young, but I feel like we are still Arkansas’ best-kept secret,” Fletcher said.

“This is not just African-American history, it’s American history that we all share,” she said. “We are all connected. We are never going to run out of stories to tell here.”