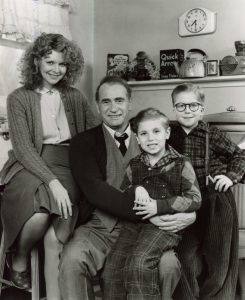 She’s the glue that holds the Parker family together in the Yuletide classic comedy A Christmas Story.

And speaking of glue, her husband accuses her of squandering it when she “accidentally” breaks his beloved gawdy leg lamp. He grunts: “You used up all the glue ON PURPOSE!”

She gets in her fair share of one-liners too.

When her older son wants a BB gun: “You’ll shoot your eye out!”

When her younger son won’t eat meatloaf: “Show me how the little piggies eat!”

When her younger son wails, “I can’t put my arms down!” after she overdresses him for the winter weather: “Well, put your arms down when you get to school!”

And yet we never learn much about this nurturing, long-suffering presence. We’re never even told this witty woman’s name. She’s only “Mom” to Ralphie and “Mother Parker” in the credits.

But in real life, the actress’ name is Melinda Dillon (no relation to Matt). And the endearing movie matriarch hails not from Hohman, Indiana, where the 1983 film was set (though it was shot in Cleveland, Ohio, and Toronto, Canada). She’s from Arkansas. 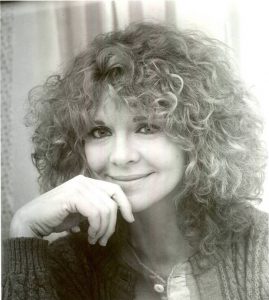 Melinda Rose Dillon was born in 1939 in Hope, according to the Encyclopedia of Arkansas. The website of The Second City improv group says Dillon moved to Chicago “where she performed with The Second City after working as the club’s first coat check girl.” From there, she had a long list of acting jobs both before and after A Christmas Story.

She was nominated for a Tony Award for Best Supporting Actress in 1963 for the original Broadway production of Who’s Afraid of Virginia Woolf?

She received two Academy Award nominations for Best Supporting Actress: in 1977 for Close Encounters of the Third Kind, and in 1981 for Absence of Malice.

Says the Encyclopedia of Arkansas, “Information about her early life is sparse, as Dillon remains an intensely private person.”

So not much is known about Dillon personally, just like her most famous character, Mother Parker.