When the country store revived two years ago by Scott Muse originally opened in 1937 along Arkansas 5 south of Heber Springs, the highway was gravel. There was no electricity locally. A bottle of cola cost a nickel.

That‘s how much life has changed in the span of decades since family-run country stores dotted rural and small-town America. Muse’s Country Store, which he now operates mainly for pleasure as a stop-by attraction rather than a commercial venture, plays to the enduring human nostalgia for the past — or at least the past as we wistfully remember it. 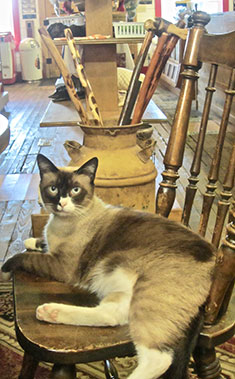 Bandit, taken in as a stray two years ago, is the resident cat at Muse’s Country Store.

“You can call this a labor of love,” Muse says. “I’ve done this so people can go back in time. This is as close as I can make it to time travel.”

He is sitting near the back of the deliberately cluttered premises while his cat, Bandit, sprawls on a

nearby chair. On one wall are Arkansas license plates from most years, starting with one from 1911, a genuine collector’s item.

A large cabinet with dozens of drawers is a decades-old bin from which customers would buy vegetable and flower seeds for their backyard gardens. It looks like it might qualify to appear on Antiques Roadshow. 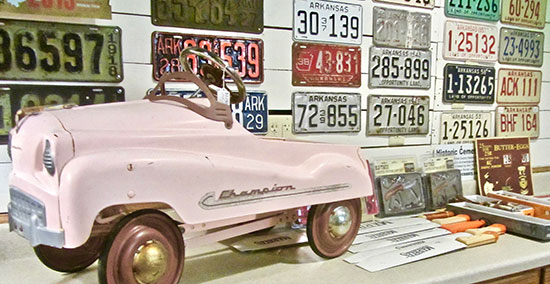 Tokens of nostalgia at Muse‘s Country Store include Arkansas license plates going back to 1911 and a pedal car from decades ago.

Now 61, Muse moved from Minnesota to a lakeside house in Heber Springs in 1999 with his wife, Liz, and their two children. The couple now lives in a house next to the store.

“I drove by this place a thousand times over the 16 years before I bought it,” he says. “It had been empty since the end of 1986. It was barely standing. One day, for some reason, I said to myself, ‘I’m gonna save that little store.’ It was just one of those things. Now if I look back, I say, ‘What a project!’”

The sustaining charm of the country store (aka general store or country market), in Arkansas and elsewhere, is noted at legendsofamerica.com, a website dedicated to “exploring history, destinations, people and legends of this great country.”

“Today, there are few places that can evoke pleasantly nostalgic memories among old-timers like that of the old-fashioned country store,” the site says. “Many remember, with great fondness, the family shopping trips, penny candies and the shared trading of philosophy around the potbelly stove in the winter or sitting upon the broad porch in the summer.”

Muse’s lacks a potbelly stove, for now at least. Nor does it have a broad porch. But a bench with a 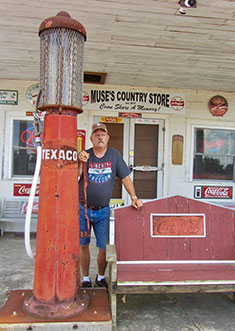 Scott Muse stands next to a vintage gasoline pump he had installed outside his country store.

back and arms sits out front, making a comfortable perch where visitors can have their picture taken. It is flanked by two vintage gasoline pumps, serving only an ornamental purpose.

Faded photographs displayed on a table inside show the store with some of the previous owners standing by working gasoline pumps. The family names included Tedder, Young, Cagle, Mullins and Frayser.

Muse says the Fraysers closed the store when they retired, adding that “it was always a tough way to earn decent money. And you can’t make a living anymore running a general store. For six months, I tried groceries: bread, eggs, milk. But that didn’t work. I slimmed it down to mostly snacks and antiques — and my junk.”

He jokes, “I’m here for the tourists who are lost. I get a lot of lost people. They’re looking for Greers Ferry Lake. I should hang out a sign: ‘If you’re lost, stop here.’” 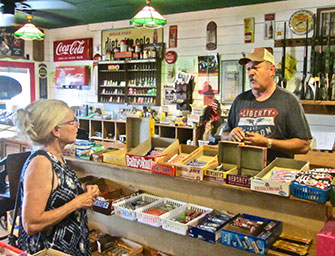 Deborah May, who remembers when the passing state highway was gravel, talks with proprietor Scott Muse.

Muse’s prime pleasures. He gives an example of the memories folks share:

“Some people, when they walk through the door, they talk about the childhood years when they rode the school bus. The bus in, say, the 1950s, was a totally different world from today. It would swing through the turnaround here, and if you had a nickel or a dime, you could get off to buy a snack. The bus would go along to drop off more kids, and when the bus driver came back, you’d have to be sure to get back on.

“Then at Christmastime, on the last day of school before the holiday, the driver would buy all the kids on the bus a soda and a candy bar. That was for being good all fall.”

The 21st-century corporate chain versions  of country stores can be found on the outskirts of many a small town in Arkansas and across the nation. But they are a different breed from the old-time family store that Muse has replicated.

Muse had to start pretty much from scratch in restoring his country store, along with adding amenities like central air conditioning and an electronic security system.

But his updated version does live up to the slogan printed above the front doors: “Come share a memory!”