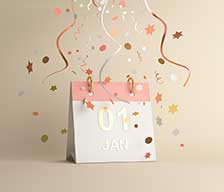 January marks the time for setting goals and expectations for a new year, often referred to as
resolutions. At the outset, we are optimistic, rested from the holiday season and full of
energy. Whether it’s a new business or product launch, a new school semester, a creative
business plan or new family goals, we are refreshed and ready to tackle a new year.
For electric cooperatives, it is a time to implement new or upgraded distribution system
facilities, new or enhanced member services and new civic projects within the local
community.
The history of New Year’s resolutions is an interesting one. According to history.com, the
ancient Babylonians were the first people to make New Year’s resolutions, about 4,000 years
ago! They were also the first civilization that held celebrations of the new year, which for them,
began in the middle of March when the crops were planted. The Babylonians held a huge 12-
day celebration to recognize the crowning of a new king or honoring the existing king. It’s
fascinating to know that the ritual of making New Year’s resolutions today evolved from the list
of promises that the Babylonians made to their gods — promises such as paying off their debts
or returning objects that they borrowed.
Fast forward to 46 B.C., and we learn that the residents of Rome had a similar New Year’s ritual.
Julius Caesar declared Jan. 1 as the beginning of the new year. January was chosen because it
was named after the Roman god Janus. The Romans believed Janus had two faces so he could
look backward into the previous year, as well as ahead into the future, which made Jan. 1 the
best date for declaring change and making resolutions for the new year (“out with the old, and
in with the new”).
For Christians, the first day of January also became the official first day of the new year. It
signified the time to reassess the past and vow to do better in the future. In 1740, the founder
of the Methodist church, John Wesley, created a church service called the “Covenant Renewal
Service,” which took place either on New Year’s Eve or New Year’s Day. The services included
reading from the Bible and singing hymns, in lieu of more boisterous activities to celebrate a
new year. Many churches today have services on New Year’s Eve to pray and make resolutions
for the new year. Looking back through the ages, it’s interesting to see how many different
practices have evolved to ring in the new year and establish new goals and fresh beginnings.
When you step back and reflect on New Year’s practices and traditions, it’s clear that electric
cooperatives also look at the past and plan for the future. As a case in point, the staff of this
magazine, myself and the rest of our department met last month to reflect on 2019 and plan
for 2020. We discussed how we can better serve our electric distribution cooperatives who
provide this magazine to you. We also have our resolutions for our families and ourselves. The
emotions we feel include anticipation, excitement, enthusiasm and a sense of commitment.
We will strive to make 2020 even better than 2019. It will usher in a new decade of
change. May your new year bring you everything that you wish for, including peace, health and
harmony.