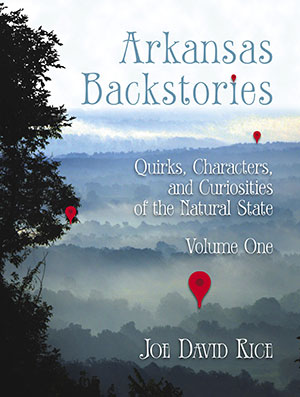 A lot of great books come out about Arkansas each year, but few authors write with as much authority on the little, curious back-corners of the state and the weird facts and stories that spring from them than Joe David Rice, author of the newly released book, Arkansas Backstories, Volume 1: Quirks, Characters, and Curiosities of the Natural State.

It takes a natural storyteller to do a great story justice, someone with not only a command of the facts but a warmth and fondness for his subject and a showman’s flair for sharing with an audience. Rice is just such a storyteller.

Over the 30 years Rice served as director of Arkansas Tourism, his work took him to every part of the state. In place after place, someone would tell him about the community’s most interesting stories, oddities and characters. He’s collected the knowledge gleaned over three decades of traveling the state in this 260-page hardback befitting a coffee table.

Arkansas Backstories brings those colorful, often-forgotten stories and real-life characters to center stage. The trivia of our state comes to life. Did you know the CIA had secret contracts with an Arkansas organization to train animals for clandestine activities? Or that there’s good evidence that Abraham Lincoln lived for a time in northeast Arkansas, chopping wood for a plantation owner?

Rice takes readers through Arkansas’ connections to Texas’ fight for independence, tells how baseball’s spring training routine originally began in Hot Springs and how the first assassination of a sitting member of Congress took place in Monroe County. Rice goes beyond mere trivia — like Arkansas being the country’s leading producer of goldfish — and tells all about it. Not only do you learn that the first African-American presidential candidate was from Arkansas, or that the state’s capital city was once known as Arkopolis, you get the full story.

One side bit of trivia not found in the book: Rice is not only a member of Carroll Electric Cooperative, he is also a former employee of Arkansas Living’s parent organization, Arkansas Electric Cooperatives, Inc. (AECI). Years ago, when he was in college, Rice worked in the transformer shop. He’s come a long way since then.