When I was in college at Arkansas State University in Jonesboro, my fraternity brothers and I considered it a 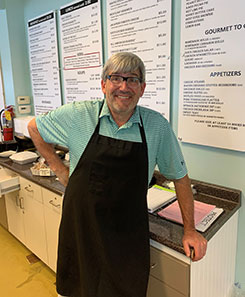 special treat to have lunch at Sue’s Kitchen on Main Street. Ms. Sue was always there with a big, warm smile, and her signature homemade meals that could make a bad day great with just one bite.

The family’s catering and restaurant story is fascinating. Sue Williams started out decorating cakes, eventually catering events, serving as a local bank’s executive chef and then opening Sue’s Kitchen in 1984. Meanwhile, her son, John Williams, entered the catering business while his mother was employed by the bank. The bank president didn’t want Sue catering events while she was employed by the bank. So, Sue would drive the 14-year-old John to events that he flawlessly managed. John eventually opened a restaurant in Jonesboro before entering other ventures and finally rebranding Sue’s Kitchen as Sue’s Kitchen Express in 2018. Sadly, Sue passed away on Christmas Day in 2020. However, her legacy lives on strongly with John and her daughter, Lori.

During my visit, John and I realized that we probably ran in the same circles while growing up in the Jonesboro area. We had a great conversation about his mother and reflected on memories of growing up in a different time. I asked John what my son, Jake, who accompanied me on the visit, and I should try for lunch. 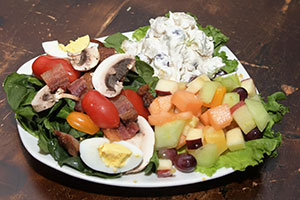 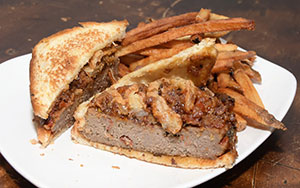 Next up was a Meatloaf Sandwich. Jake reminded me that he had never had a meatloaf sandwich (Dad fail), but after his first bite, he nodded his head and grinned. Winner, winner, meatloaf sandwich for dinner. Sue’s take on the sandwich featured a thick slice of homemade meatloaf with a yumm-o bacon-onion jam coating and fried onion petals nestled between two huge slices of Texas toast.

My favorite daily lunch special at Sue’s back in the day was Chicken Spaghetti, and I was thrilled to see that her dish was still on the menu. John decided we should try that day’s special — Turkey and Dressing. Nothing like a fellow northeast Arkansan to steer me right. The huge serving was Thanksgiving-worthy! Sliced, baked turkey was lovingly layered atop a nice bed of homemade cornbread dressing and drizzled with gravy. The plate also included Sue’s cream cheese corn, green beans and mashed potatoes and gravy.

A few menu items that I will try in the future include the Waygu Steak Sandwich, the Jalapeño Pimento Cheese Sandwich, the Ham Palacinta Crepes and just about everything on the breakfast menu.

John and his team make many varieties of cakes, pies, rolls, cinnamon rolls and much more daily. Jake and I 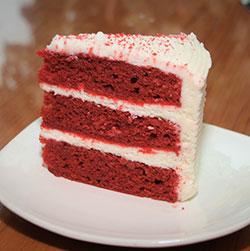 The Red Velvet at Sue’s Kitchen Express takes the cake.

I forgot to mention that diners are served warm, homemade yeast rolls when seated. Be prepared to buy a package of them to take home and bake. And, there are take-and-bake meals available daily, including the legendary Chicken Spaghetti. If you are hosting an event, John and his team will set you up with a platter of Sue’s Cheese Straws, Cheese Olives, Sausage Balls, Deviled Eggs and more.

Go see my friend John Williams and his team at Sue’s Kitchen Express, and start a new family tradition like I did.