The first structure likely to grab your attention when entering Norfork is the two-story, weathered log courthouse overlooking the White River on Arkansas 5. 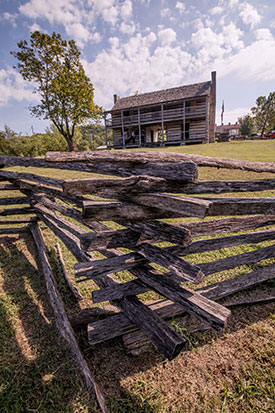 Renovations to the Jacob Wolf House Historic Site in Norfork will be unveiled at Pioneer Days, photo Courtesy of City of Norforkoverlooking the White River on Arkansas 5.

Historically, it’s the most important property in town.

Built by Jacob Wolf in 1829, this building was the first territorial courthouse in Izard County (now Baxter County) and is the oldest public structure in Arkansas.

Step inside, climb the stairs, and wood creaks beneath your feet. Stand on the back porch and you’ll be standing in the same spot where a 77-year-old Wolf wielded a cane to fight off Union soldiers after troops seized his home and began to remove its contents.

“For that act, he was imprisoned in Batesville, released in September 1862, but his health never recovered,” Mowdy says. He died in the house Jan. 1, 1863.

Wolf was a jack of all trades: a master carpenter, blacksmith, politician, land owner, business owner and even postmaster. He had 16 children between three wives. (His first two wives died).

While the property has had multiple owners over the years, in 2017 the Jacob Wolf House Historic Site was acquired by the Arkansas Historic Preservation Program, a division of the Department of Arkansas Heritage. The facility has been undergoing a renovation, thanks to a grant from the Arkansas Natural and Cultural Resources Council.

“Our goal is to protect, preserve and promote one of the state’s richest historical sites,” Mowdy says.

Mowdy is eager to share the improvements with visitors during the town’s annual Pioneer Days, the largest festival in Norfork, held the third weekend in May.

“The Early Arkansaw Reenactors Association will be on site conducting living-history programs, so when the public arrives, they will be walking into the 1820s,” Mowdy says. “We hope to have eight to 12 frontier camps set up, everybody in period dress. A blacksmith shop demonstration, live soap-making demonstration.” He says a life-size replica keelboat will be dry docked with a captain and crew and there will be living history tours of the courthouse.

Reenactors set up camp at a previous Pioneer Days festival. photo Courtesy of City of Norfork

During Pioneer Days, Norfork’s population of 550 more than quadruples, and this year is expected to attract even more visitors because of the Wolf House.

Mayor Lisa Harrison says organizers are adding activities. While Pioneer Days has traditionally been held on Saturday, there are festivities Friday, too.

“We have all kinds of events at the Wolf House,” Harrison says. “Friday evening, we have an outdoor movie and popcorn at City Hall circle. We have live music at the community center. Also, businesses will stay open later.”

Saturday, a highlight is the 10 a.m. parade. Throughout the day, there will be games, a pie-eating contest, live music, a classic car show, Civil War reenactors, and vendors selling crafts and food, such as barbecue and fried pies.

At 3 p.m., the town’s famous White River Duck Race commences when 200 yellow rubber duckies are dropped into the river and float to the finish line, explains Chrissy Strout, water court clerk. The ducks, sold and numbered, are a fundraiser for the Horace Mann school buildings on the National Register of Historic Places. There are prizes for the first ducks to cross the finish line.

Pioneer Days is free to attend. “You just walk around — it’s through the whole town of Norfork from Wolf House to City Hall circle,” Harrison says. “There is something for everyone.”

If you can’t make it to Pioneer Days, the area is a wonderful summer and fall destination, ripe with fishing, great lodging options and gorgeous views of the river.

Located at the confluence of the North Fork River and the White River, Norfork attracts throngs of fishing enthusiasts. A world-record brown trout has been caught in these waters, which are said to offer some of the best trout fishing in the country.

For breakfast or lunch, pop into the family-owned Norfork Cafe, where they serve up big plates of biscuits and gravy, among other dishes.

The Wolf House is open throughout the year from 8 a.m.-4:30 p.m., Monday-Friday. Visitors can take self-guided tours on weekends. Listed on the National Register of Historic Places, it’s free to visit.

For a link to attractions and lodging: www.arkansas.com/norfork.