Cherokee actor Wes Studi has been involved in the making of some 30 films, including Dances with 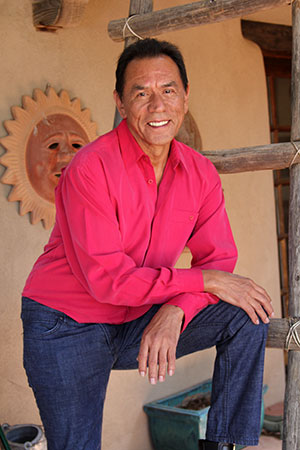 Wolves, The Last of the Mohicans and Avatar.

And now the 71-year-old is making something else — history.

On Oct. 27, Studi will become the first Native American Oscar winner when he is presented an honorary Academy Award at the 11th annual Governors Awards. A statement from the Academy of Motion Picture Arts and Sciences explains Studi is “known for portraying strong Native American characters with poignancy and authenticity.”

A few weeks earlier, the Oklahoma native will be making a trip to Arkansas.

From Oct. 4-6, Studi will be the headlining presenter of the third annual “Native American Cultural Celebration: Tradition Through Pop Culture” for the Museum of Native American History (MONAH) in Bentonville. Other presenters include artist/filmmaker Steven Paul Judd, singer/songwriter Bobby Bridger and “The Kitchen Curandera” Felicia Ruiz.

The three-day event will include everything from an elaborate opening ceremony to storytelling sessions to medicine-making workshops. Events are free, except for an Oct. 6 brunch that features the Cherokee Indian Baptist Choir and serves as a fundraiser to benefit Partnership with Native Americans.

MONAH Director Charlotte Buchanan-Yale says, “What we’ve been doing these last few years is building alliances and making Northwest Arkansas a destination for indigenous cultural leaders, authors, storytellers, Earth Guardians, artists, you name it. … And we are working with the Arkansas Department of Parks and Tourism to feature the original people of Arkansas in our opening celebration: Quapaw, Caddo, Osage and the Cherokee people who settled in Arkansas after the Trail of Tears.

“With this event this year, ‘Tradition Through Pop Culture,’ we’re reaching out to … educate future generations about the first people.”

And they wish to educate present generations, too.

Buchanan-Yale says, “We had someone come through about a month ago who said, ‘Doesn’t this museum make you sad to tell the story of these conquered people?’ Well, actually, they’re not. They’re surviving and thriving quite well!”

As for the history of this history museum: The original Museum of Native American Artifacts, which opened in downtown Bentonville in 2006, outgrew its space. Founded by Bentonville’s David Bogle, a registered member of the Cherokee Nation, MONAH — home to more than 10,000 Native American artifacts — moved to its current space in 2008.