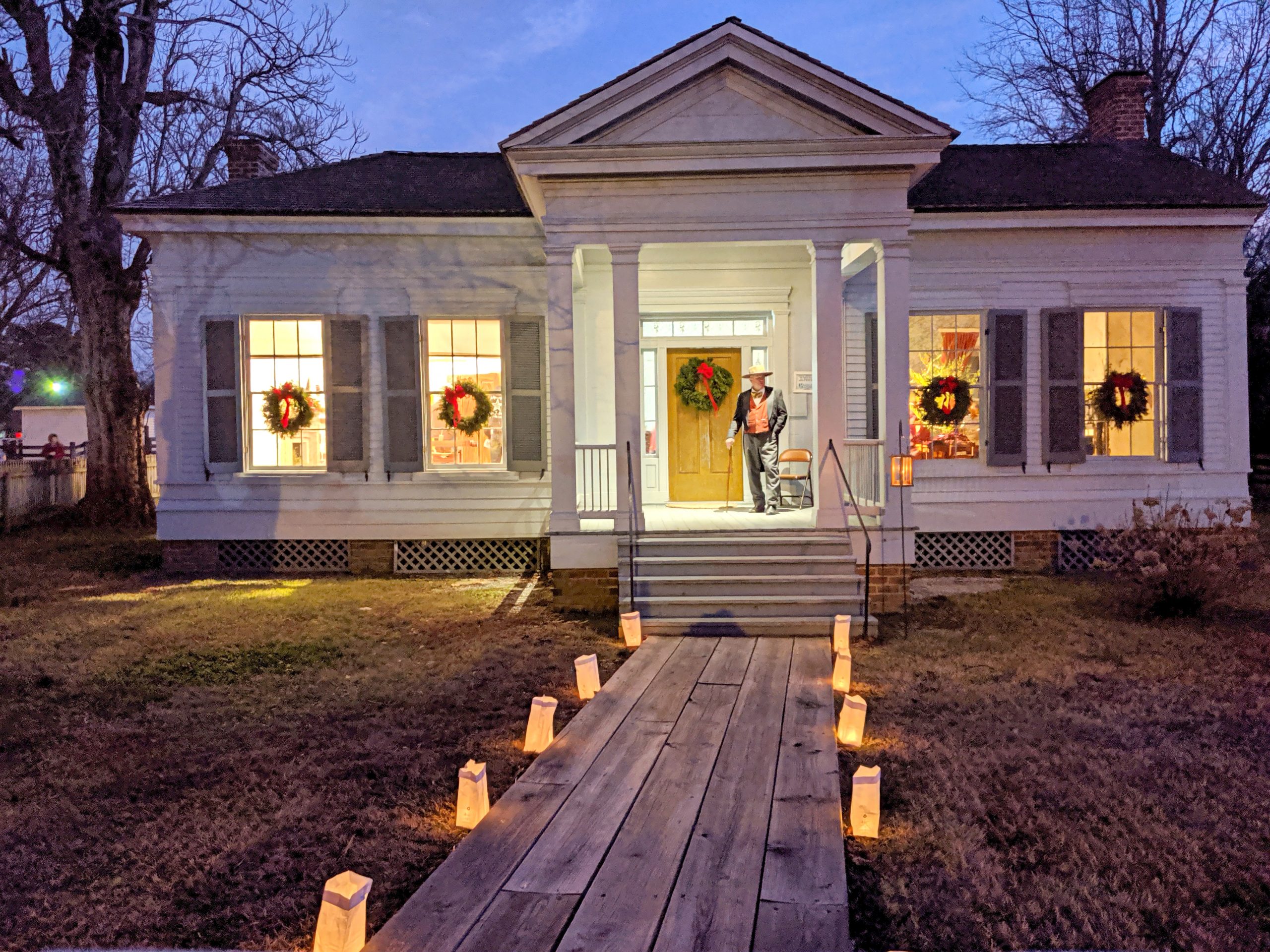 At Historic Washington State Park, guests step back in time to a Christmas celebrated with quaint, simplistic holiday decorations. Photo courtesy of Arkansas Department of Parks, Heritage and Tourism

We all know what modern American Christmas decorations
look like.

Larger-than-life inflatable penguins and snowmen in yards. Elaborately decorated Christmas trees. Houses lit up like the Griswolds’ in “National Lampoon’s Christmas Vacation.” They’re the things we do to make our homes look like the picture-perfect modern Christmas.

And mostly, we love it in all its excessive, happy glory.

Tales of Christmases long, long ago

And yet, down in the southwest corner of our state, one just-as-festive small town has few of these modern holiday trappings. At Historic Washington State Park, classic signs of Christmas abound, but on these 190-year-old streets, it’s an altogether simpler holiday. Washington dates to 1824, a dozen years before Arkansas became a state. For several years during the Civil War, it was the Confederate capital of Arkansas, and in its heyday, it was a bustling hub of 19th-century Arkansas life. 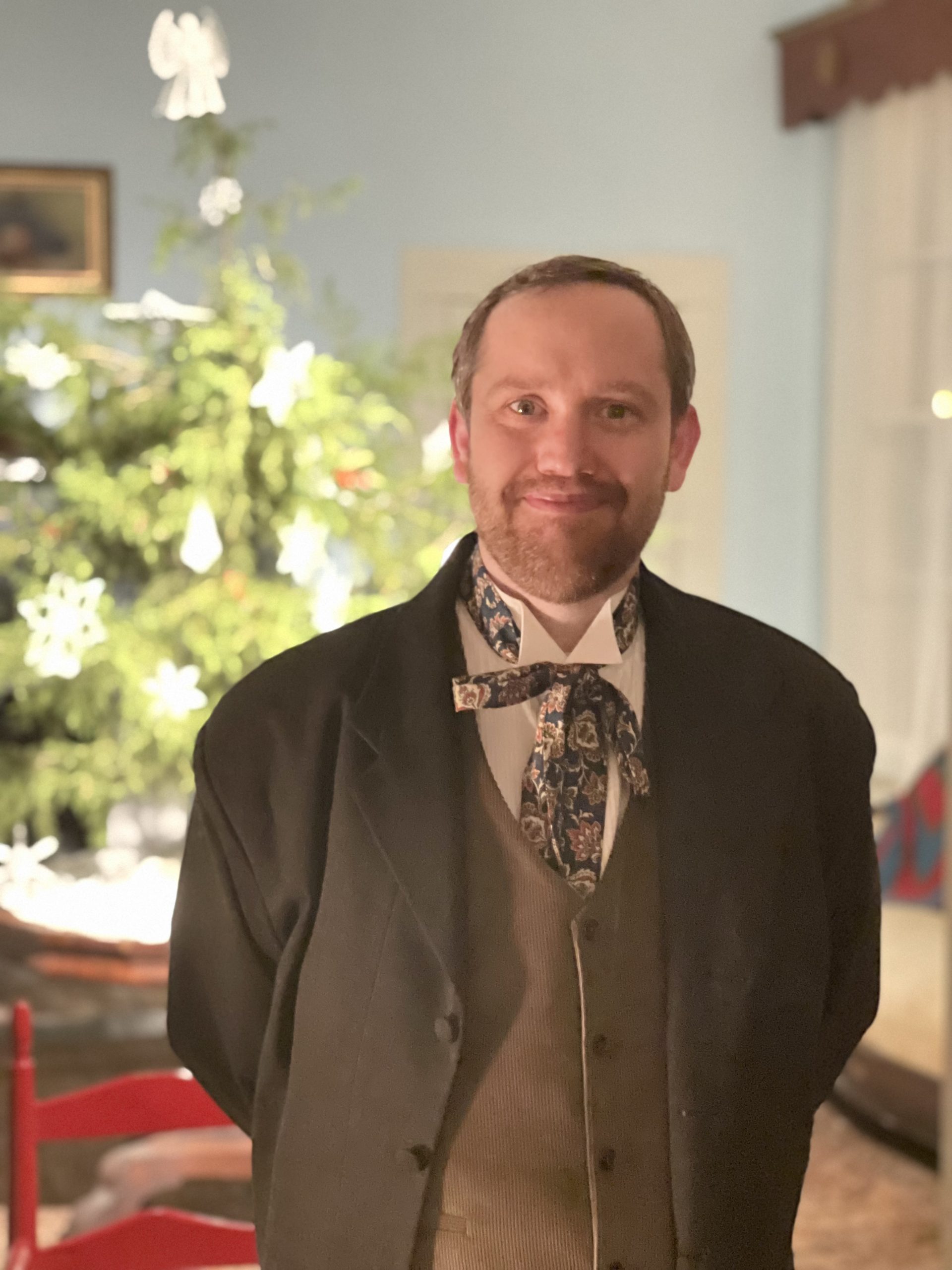 Reenactors greet guests with stories from Christmases past. Photo by Jenny Boulden

And while you’ll often run into friendly park staff wearing hoop skirts, silk cravats or pioneer work garb, there are about 135 people who make Washington their home. This is the only Arkansas state park that also happens to be a living town, one with a quaint charm every part of the year.

But Christmas is special.

“I think that at Christmas, this place becomes even more family-oriented,” Park Superintendent Pam Beasley says. “Children love the school trips, but at Christmas, we see more of them coming with their families, maybe forming their own traditions. Families like to come here for a fun holiday outing.” 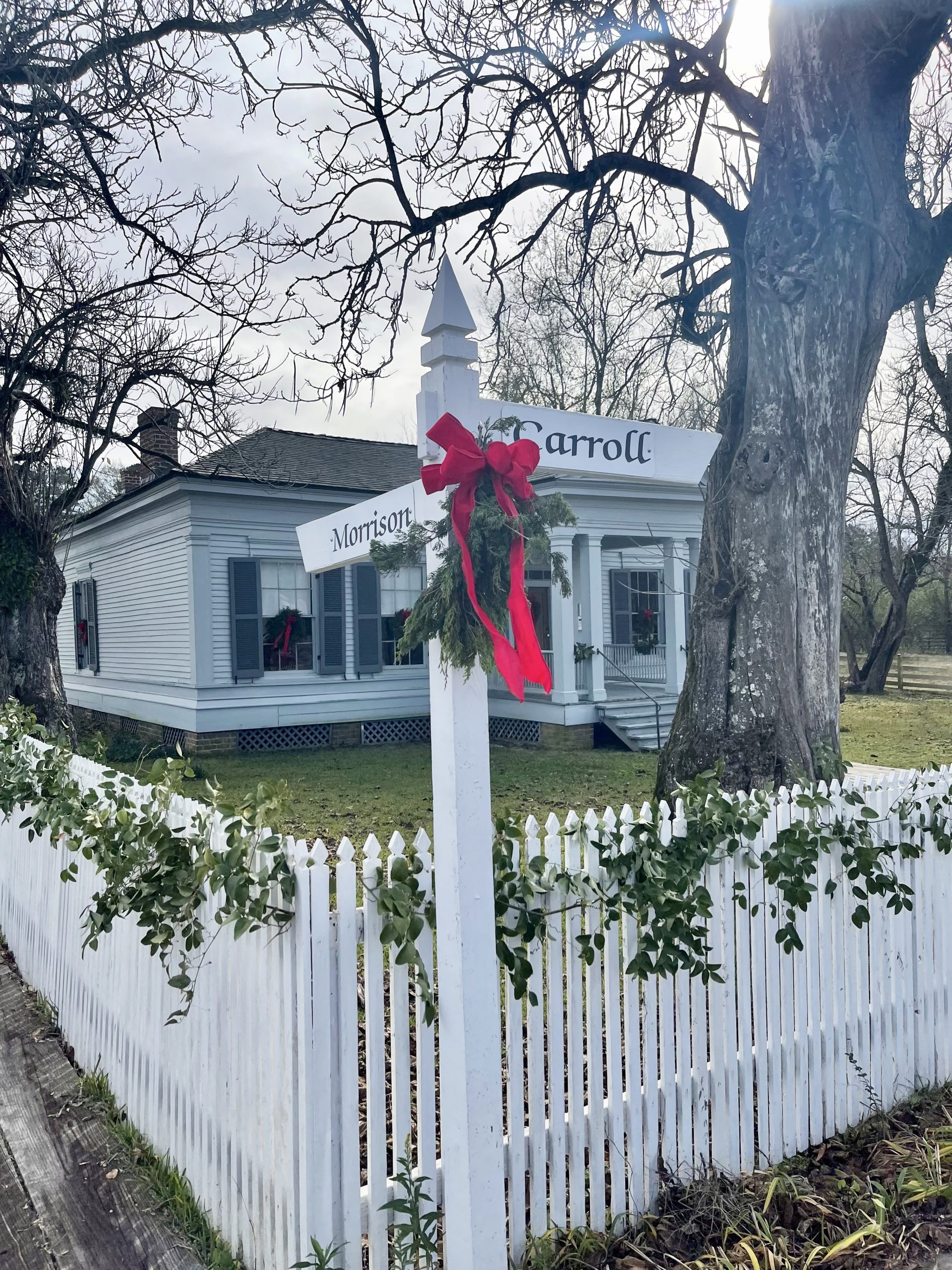 The holly and the ivy

It may be winter, but thanks to the park staff’s work, it is certainly not bleak.

Homes are dressed in elegant fresh greenery donated by local garden clubs. Cedar boughs, holly and its berries, fruits, twigs and dried flowers with vines of ivy or bits of fabric or lace to tie it all together are arranged in dozens of creative ways. The aesthetic is refreshing yet unmistakably Christmas.

You can stroll among the buildings or even drive; the town’s streets are not off-limits, so no need to walk if it doesn’t suit you, or if the weather deters you.

April Thaxton has worked for the park for more than 12 years. She says people are sometimes startled by how different the decorations are from theirs at home. “Christmas trees of the era had dried fruits, candies, maybe a little handicraft on them,” she explains. “And it’s not going to be a tree that’s all the way up to the ceiling like we like to have now; it’s going to be a little bit smaller.” 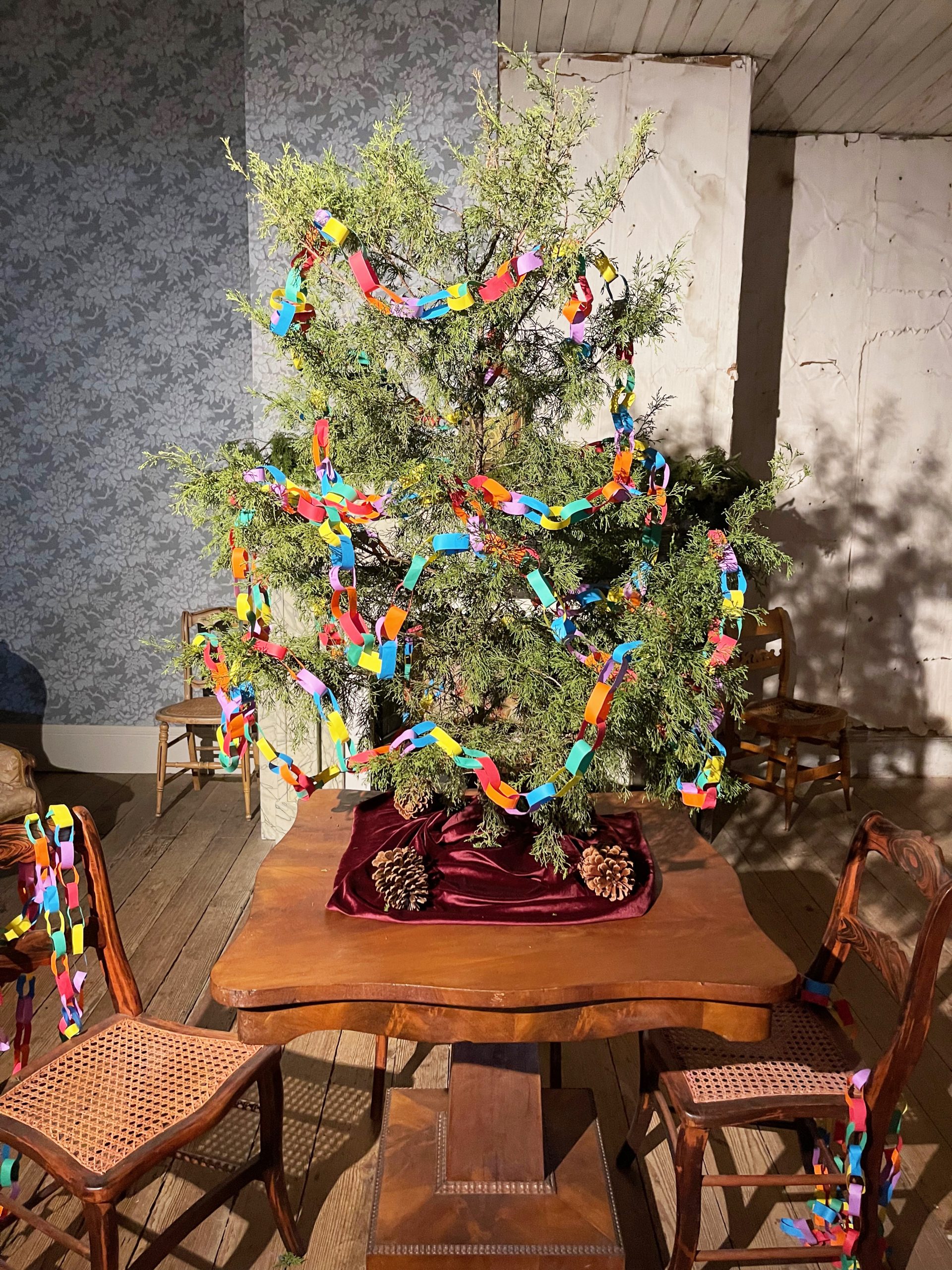 Christmas trees in the 19th century were tabletop-size with homemade ornaments. Photo by Jenny Boulden

The trees on the tour are primarily tabletop-size — bush-like evergreens with light, fluffy branches. Hanging from their boughs are handmade ornaments: hand-tatted lace snowflakes, slices of wood with children’s names painted on them, dried apples, sometimes quilted dolls or chains of colored paper.

It’s gratifying to show modern visitors “how people lived,” Thaxton says. “Sometimes you can take them out of their everyday lives, bring them in so completely they forget what the outside world is for a bit. Getting a kid to go, ‘Wow, that’s really awesome!’ That’s what I love about this place.”

Kids’ eyes also go wide at the legendary blacksmith’s forge, watching knives and decorative items created from molten-hot metal. At Christmas, the village blacksmith shares a special treat: curved iron shoes for a reindeer’s hoof, and a fun take-home story about how those shoes saved Christmas.

On one weekend each December, the park holds one of its most magical and popular events: Christmas and Candlelight. That weekend (Dec. 9-10 this year) the park welcomes visitors after dark to stroll through streets lit with thousands of luminarias. Tourable homes and businesses are invitingly aglow with oil lamps or lanterns inside. 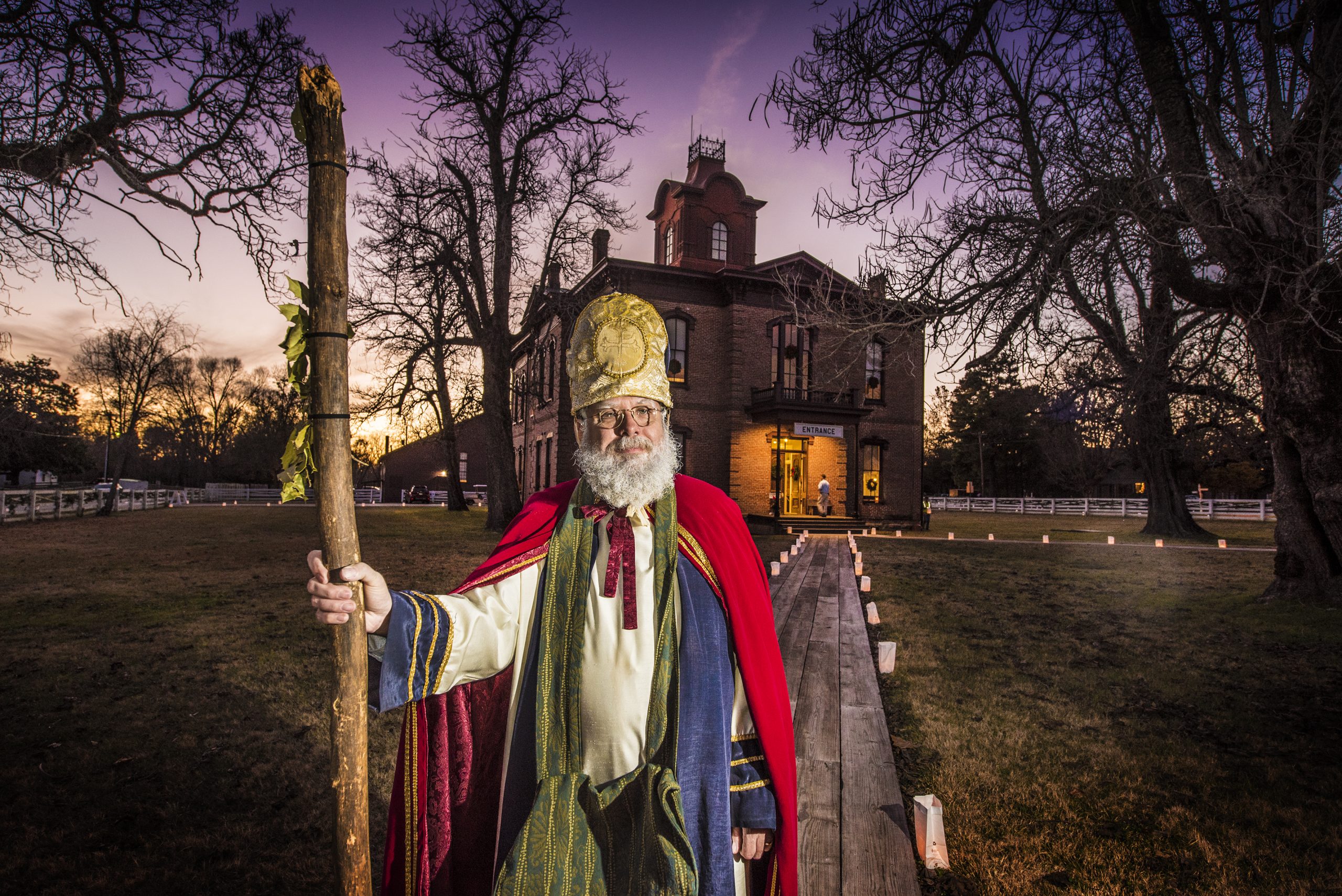 Visitors can stroll the park lit by thousands of luminarias during the Christmas and Candlelight event Dec. 9-10. Photo courtesy of Arkansas Department of Parks, Heritage and Tourism

During the evening festivities, the historic structures are full not just of light, but also of sound. The park invites dozens of musicians to provide carols and Christmas tunes in its venues both evenings. Music wafts from open doorways as you approach from candlelit paths. Laughter rings out from somewhere ahead.

Daryl Thompson of Texarkana strolls among the luminarias with his wife and friends for the who-knows-how-many-eth time. “I grew up on the military trail that went from here across the Saline River over to Brownstown,” he says. “I came with my father and on school trips before it was a state park, when it was just a historical place to go.” His family comes “just about” every Christmas to the Christmas and Candlelight event. “We just love to come back here, stroll around. It’s a great place. We come over a lot of Sundays just for lunch,” he adds.

That’s lunch at Williams Tavern Restaurant, one of the park’s most popular destinations. Built in 1832, the structure originally operated about 10 miles away, just off the Southwest Trail, serving as a tavern for travelers and the surrounding communities.

For Christmas and Candlelight, the restaurant is open until 8 p.m., a steady stream of customers in line for a tantalizing homemade buffet of roast turkey, ham, rolls, desserts and more than a dozen sides. Dine inside the tavern or outside on its porch as weather allows. The food is hot and good, the kind you come back for. 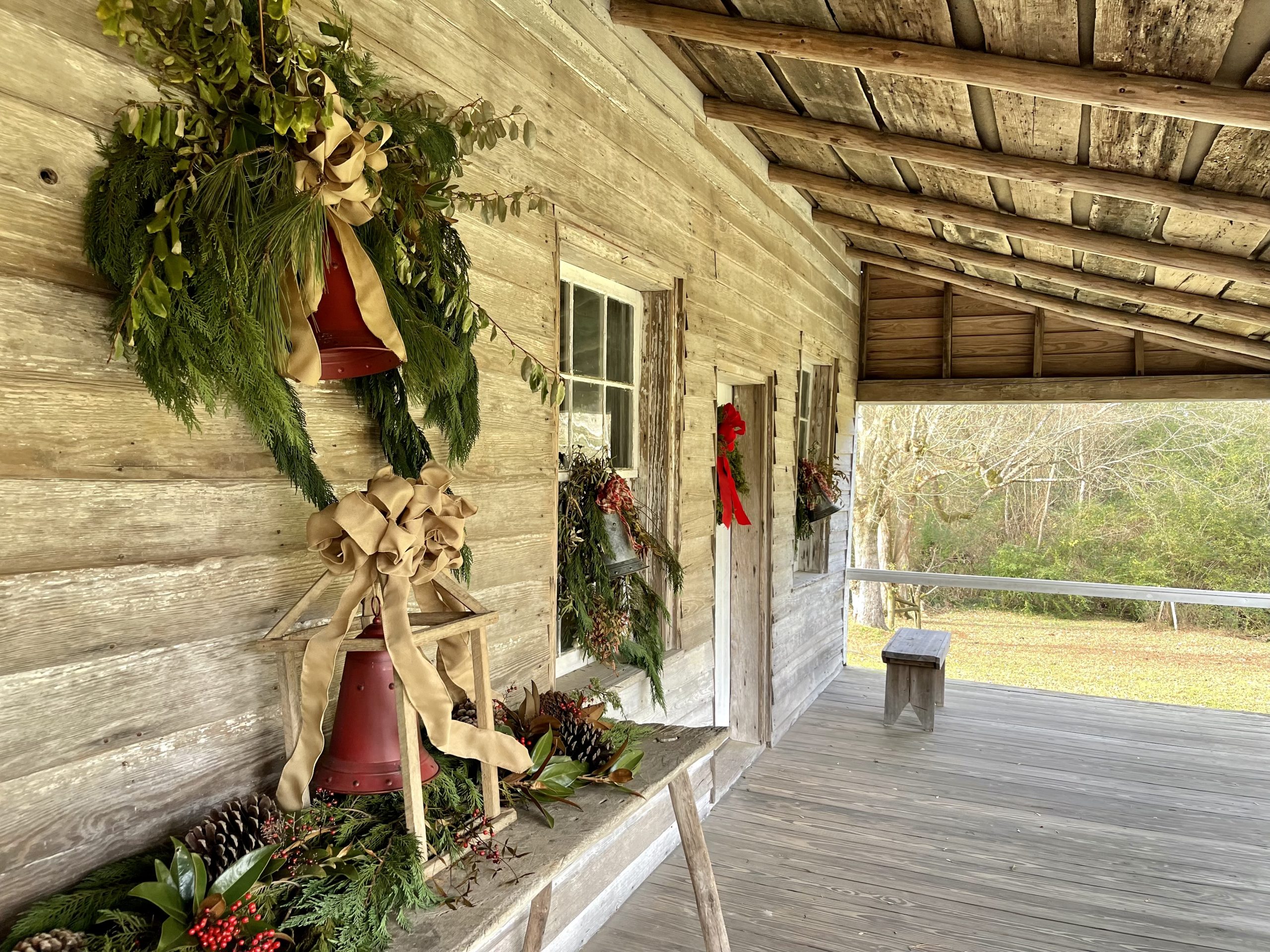 Some homes are carefully bedecked with period decor like they might have contained; others, including the Crouch House, also hold exhibit space or feature permanent interpretive panels. A former bank houses the B.W. Edwards Weapons Museum.

Inside a primitive log house is Sheila Ballard, a longtime staff member who specializes in programs on 19th-century cooking and crafts. “The hands-on stuff, the kids are all in. At Christmas, I’ve done a whole program on what sugar plums were,” she says with unmistakable glee.

“You get a different sense of this place at Christmas … there’s a closeness,” Ballard continues. “It brings back nostalgia, too. We’re all so commercialized today, but here we’re coming back and getting back to the basics of it. Seeing Christmas done like this is eye-opening, especially for the children.”

Beasley says one thing park visitors today share with Washington’s original inhabitants is the desire to create a merry Christmas for their communities.

“Our Christmas traditions are often about spending time with family and friends,” Beasley says. “It was no different then, despite how much else has changed. People still want Christmas to be special for their families in whatever ways they can make it memorable.”