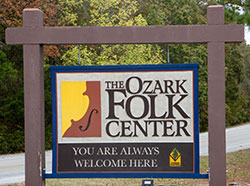 If Mayberry exists, you’re standing in it,” said Casey Marshall, a Little Rock resident who first visited the Ozark Folk Center (OFC) when he was 5. He was just old enough to remember the vibrant fiddle music played throughout the park. He’s been coming back ever since.

At the OFC, artisans demonstrate and teach pioneer skills such as spinning, broom-making, blacksmithing, woodcarving and tatting. The mission is to preserve and perpetuate Ozarks heritage, including music, culture and crafts.

“This is living history, keeping these skills alive,” Marshall said.

Besides showcasing and selling folk crafts, the center is home to a medley of musicians who play old-time Ozarks music that predates 1941. Only acoustic music is allowed. 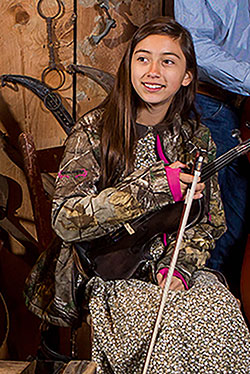 During a visit last fall by Arkansas Living, Mary Parker and the White River Ramblers were performing in the auditorium.

Parker is somewhat of a fiddle prodigy. The 12-year-old is a seven-time fiddle champion in three states, with most of her titles in Arkansas.

Clad in a long, old-fashioned dress resembling something from Little House on the Prairie, legs crossed, Parker rested her chin on her fiddle and used her bow to caress a beautiful old-time ballad out of her instrument.
Watching Parker, fiddle-playing seemed as natural to her as breathing.

One of a kind 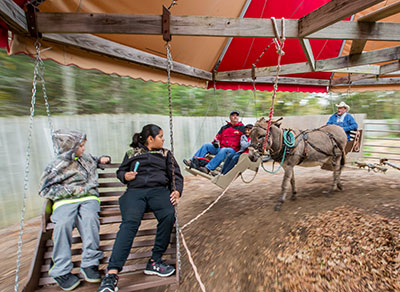 Ray Stafford and his donkey, Tango, run the “courtin’ swing.”

This park is the only one like it in the country, said Jeanette Larson, craft director.

“Where else can you find a mule-driven picnic swing, known in the early 1900s as a ‘courtin’ swing?’” asked Ray Stafford, who mans the contraption. Powered by a mule and resembling a merry-go-round for adults, the swing was designed for opposite sexes to socialize at events.

On this day, there was nothing but gleeful giggles as children on a field trip took a ride.

Throughout the park, it’s fairly common to find couples, second-generation musicians or entire families entrenched at the OFC. 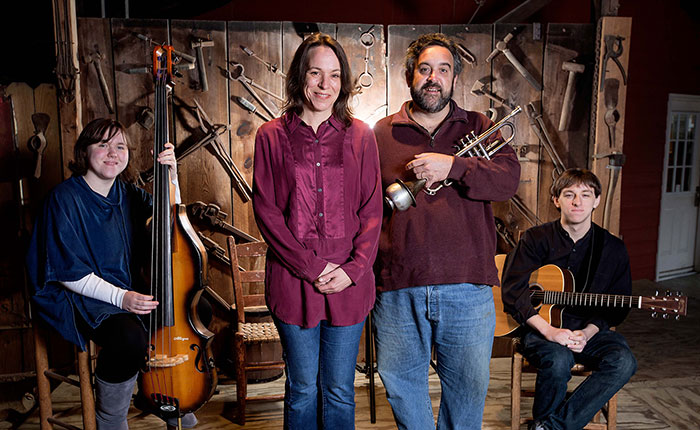 Traci and Jeff Glover, and their children, Rori, left, and Fox, have their own band.

The Glover family is one example: Mom Traci is the candlemaker; daughter Rori works alongside her mother; son Fox is an apprentice in the gun shop; and husband Jeff is a producer for Ozark Highlands Radio. Together they form The Glover Band and regularly perform at the park.

The family moved to Mountain View in 1998, lured by the music and lifestyle.

“It’s a dream come true,” said Traci Glover. “I was raised in a musical family. For me, it’s kind of the von Trapp family ideal. I wanted to emulate that for my family.” 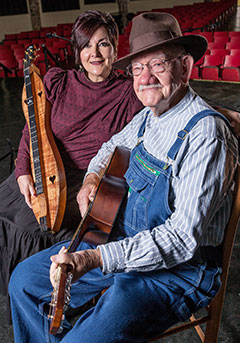 Pam Setser plays the dulcimer and her father, Tommy Simmons, plays the guitar.

Pam Setser first took the stage at the center when she was 13 as part of The Simmons Family band. Her mother played a dulcimer, handcrafted locally, with frets made out of baling wire. Setser, who is 57, still performs regularly at the park, singing, playing the autoharp, guitar, mountain dulcimer and spoons.

“I love what it’s all about,” Setser said. “It’s a very important addition to our community. The Ozark Folk Center will always have a special place in my heart. I grew up there.”

What has become a cultural mecca began with a basic need: not necessarily to preserve a heritage, but instead to modernize a small town in Stone County.

The initial idea for the center was hatched in 1963 as a way for Mountain View to gain federal funds to lay a water and sewer system, said Tommy Simmons, OFC’s first general manager and former Mountain View mayor.

In 1963, the first Arkansas Folk Festival — now an annual event held the third weekend in April — was organized. It was a hit. John Opitz, folk music fan and regional director of what is now known as the Economic Development Administration, suggested officials apply for federal funds to construct a music auditorium for future festivals. 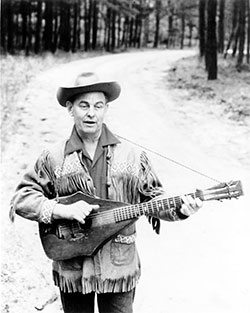 The funds would also be used to build a water and sewer system.

Musician and songwriter Jimmy Driftwood quickly became an advocate and lobbied for the funds. Over the years, the vision of the center evolved.

In 1967, a group of residents went to Washington, D.C., sat on the steps of the U.S. Capitol and played music. Simmons laughed as he recalled the headline of The Washington Post, which stated people from Arkansas were “Fiddling for Funds.” 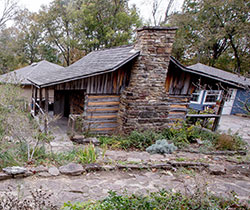 The following year, Arkansas Congressman Wilbur D. Mills introduced legislation to provide more than $3 million in grants and loans for the folk center, which opened in 1973.

Aside from vendors and classes, the center has cabins available for rent; The Skillet, an award-winning restaurant that showcases Southern fare and uses herbs grown on the property; historical schoolhouse and buildings; a gift shop and general store; a theatre dedicated to showcasing American folk music; and a nationally recognized heritage herb garden.

From the park, you can access Loco Ropes, a high-wire treetop adventure course that allows people to explore, zipline, and climb through a canopy of trees in the lush Ozark Mountains. 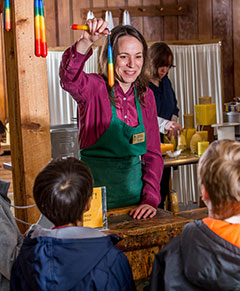 In many ways, the Ozark Folk Center feels like a living scrapbook; to turn the page, simply enter a different craftsperson’s shop.

In the candle shop, hand-dipped beeswax taper candles dangled from nails around the room, which has the faint aroma of toasted honey. On Arkansas Living’s visit, candlemaker Traci Glover dunked her rack, which holds 66 candles and was crafted by a blacksmith at the park, into melted wax. A single taper is dipped more than 40 times over two and a half hours to create a candle.

When Glover lifted a lid on vats of colorful paraffin wax, there was the nostalgic smell of a freshly opened box of crayons.

People can pay to dip their own candles, which is very popular with children, said Glover.

Last October, an elementary class from Hackler Intermediate School in Mountain Home was on a field trip, and the kids clamored for a chance to dip candles. Lindsay Kincade, fourth-grade teacher, said the class was studying pioneers and reading Little House in the Big Woods.

“This allows students to see everything they are learning about, put into action,” said Kincade. 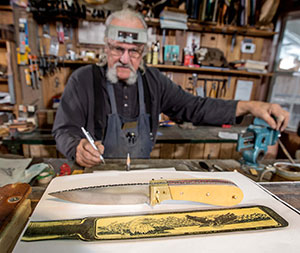 Tourists can visit with knife maker Tom Weir, a friendly fellow whose shop looks like a mountain man’s den. On display are animal skulls, hides and hand-crafted knives with handles made from Osage orange, walnut or antlers.

Weir was busy pounding the blade of a knife he was making for a benefit for fiddle prodigy Mary Parker’s family. Parker’s father had died unexpectedly a week before, leaving behind nine children. Artisans quickly organized an auction to benefit the family, and throughout the park crafts people were making items to donate.

The natural beauty of Mountain View, coupled with the spirit of the people is what attracted Weir to the area after he retired. 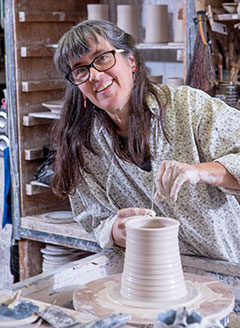 Many of the artisans are not from Mountain View, but gravitated to the town because of the lifestyle it provides, said John Perry, who runs the pottery shop with his wife, Judi Munn.

Munn earned her bachelor’s degree in environmental science, joined the Peace Corps in Paraguay and then became a teacher.

“Teaching wasn’t nearly as fun as I thought it would be, and I got into pottery,” said Munn, as she worked at her treadle-powered wheel. She cupped a piece of clay she was molding. There was a slight sway in her movements as she used her foot to power the machine.

The couple also have a gas, electric and communal wood-fired groundhog-style kiln funded by a Department of Arkansas Heritage grant. They only light the groundhog kiln once or twice a year, and are planning to fire it up April 18-21.

Together, they make fern pottery, first harvesting Christmas ferns off the northern slopes of the Ozarks hillside near their home. Then they use the plants to decorate their pottery. 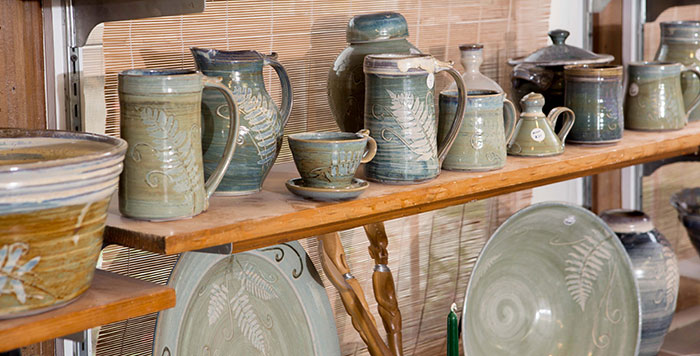 Fern pottery by John Perry and wife, Judi Munn, is displayed for sale in the pottery shop.

What sets these vendors apart isn’t their unique skill as much as their passion and stories, said Perry.

“‘Genuine,’ ‘authentic,’ those are things we hear a lot because a lot of what we do is connect with people on some meaningful level,” he said. “The people who work here are so passionate and engaged, and it’s something we don’t get a lot of in our culture. People who come to the park will say ‘Wow, this is so cool. It’s not exactly what I expected, but it’s better than I imagined.’” 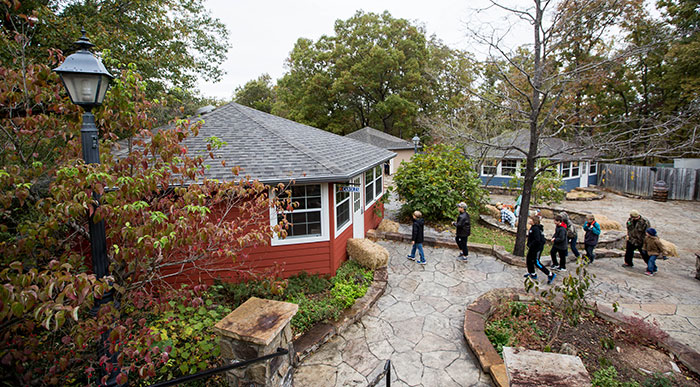 Nestled in the Arkansas Ozarks in Mountain View, the new season of the Ozark Folk Center State Park kicks off April 17. The Craft Village is open Tuesday through Saturday from April into November. Admission to the craft grounds or music auditorium is $12 for adults; $7 ages 6-12; 5 and younger are free. Family passes are $29.50. Free music is played regularly throughout the property, but there are music shows in the large auditorium from 7-9 p.m., Thursday through Saturday. Combination tickets for music and crafts are $19.50 for adults; $10.25 for children. 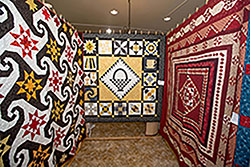 Quilts on display at the Ozark Folk Center, which hosts a three-day quilter’s retreat in September.

The center also offers a variety of classes: learn to play the dulcimer or autoharp; make soap; weave; or to grow an organic herb garden.

Juliana Goodwin is a freelance writer and cookbook author in Springfield, Missouri, who often writes about Arkansas. Dean Curtis is a Missouri-based photographer.

www.ozarkfolkcenter.com
From 20 to 200, the Ozark Folk Center is the ideal spot to hold your next Meeting, Reunion, Convention or Get-Together. This is your …