Earlier this year, when musician Holly Williams, granddaughter of country music legend Hank
Williams, Sr., opened a third location of her wildly successful Nashville store, White’s
Mercantile, in the northeast Arkansas farming community of Wilson, population 903, some
people scratched their heads. But a visit to Wilson would assure anyone that she was onto
something big.

Heading into town along the famous “Blues Highway 61,” handsomely painted signs atop the
industrial rooftops welcome you to Wilson and advertise its historic, signature business, Lee
Wilson & Co.

Already, the town has your attention, but then you notice the Wilson Town Square looks much
more like “Jolly Olde England” than Mississippi County, and it suddenly has your curiosity, too.
What exactly is this place?

A company town with an English twist
An abbreviated history might help you understand the context for this town. Brian Dempsey,
Wilson’s director of communications and brand strategy, provided background.

Lee Wilson, later known as “Boss Lee,” in the late 19th century inherited 400 acres of
timberland from his father Josiah Wilson, who settled here before the Civil War. Boss Lee had a
vision and a knack for seeing the larger picture.

Lee Wilson & Co. is the company around which the company town of Wilson was built. Photo by Kyle Rippey

His timber business led to establishing the Mississippi County drainage districts so that the
arable land could be farmed for cotton. Then he worked with the government to get a railroad
spur built to transport cotton and timber out. He built other diversified businesses and services
to serve the hundreds of tenant farmers who worked the land. A company town was born.

Dempsey said, “Boss Lee systematically built what became one of the largest cotton operations
in the nation — 57,000 acres — in the first third of the 20th century.” The family even had their
own mint to print Wilson’s company “scrip” the local tenant farmers could use exclusively at
the Wilson-owned businesses. Dempsey explained company towns were a common economic
system at the time, for better or worse, but this was never an average town because this was
never an average family. 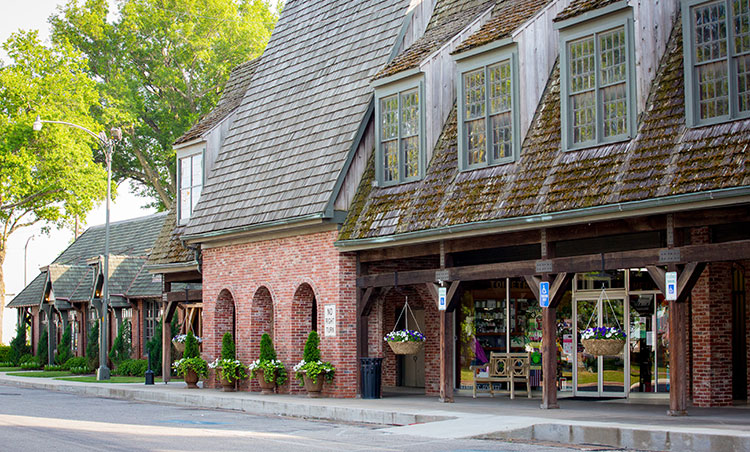 A couple from the Wilson family honeymooned in England, and brought Tudor architecture home. photo by Kyle Rippey

The Wilsons had their own eccentricities and passions, including being rampant Anglophiles. So
they built themselves a British-looking Delta town full of Tudor Revival architecture. The
Wilsons hosted friends, including members of the royal family, at their mansion, entertaining
them with formal fox hunts and polo matches across their green manicured lawns, surrounded
by cotton fields.

Once one of the largest cotton operations in the nation, agriculture in Wilson remains strong today. photo by Kyle Rippey

Time changes everything, however. After 125 years of stewardship, the Wilsons put their still-
considerable cotton business up for sale. The catch was the buyer must also purchase and care
for the town that was the family legacy.

That buyer in 2010 turned out to be The Lawrence Group, a multi-industry family business
heavily rooted in agriculture. “Gaylon Lawrence, Sr. and Gaylon Lawrence Jr. weren&#39;t in the
town reinvention business initially,” Dempsey said, “but they saw the possibilities and accepted
the challenge.” Since their multimillion dollar investment in the town, they have been saturating the place with energy and ideas and bringing the best people they could find to Wilson to partner on the progress.

White’s Mercantile is popular enough in Nashville that it doesn’t have to advertise. The Wilson location opened in May of 2017. photo by Kyle Rippey

Holly Williams was the most recent of those partners who visited Wilson and caught the spirit.
Her store’s managers, Kerri Snead and Taylor MaHarrey, are two more: Memphis-transplanted
millennials living their dream in the tiny Delta town. Both were working for a floral design shop
in Memphis when they worked some events in Wilson and immediately got inspired. “We
thought even back then, wouldn’t it be great to get away from Memphis and have a place of
our own in Wilson?” MaHarrey said. “We even talked about how we’d love to open up
something along the lines of a White’s Mercantile here — and now we are in Wilson running an
actual White’s Mercantile! It’s so cool.”
So, what’s so special about this store named for Williams’ maternal grandparents, Warren and
June White?

“We call it ‘a general store for the modern day tastemaker,’” Snead said, explaining that
Williams’ style merges classic country sensibilities with fresh and modern products, often made
by Southern artisans and designers. The store is in a converted historic gas station, a beautiful
red brick structure with large windows, and the furnishings combine industrial elements with
antique in a classic general store layout of wooden shelves and assorted displays of unique
products, artfully displayed. These are products that Williams has selected intentionally to last
generations. 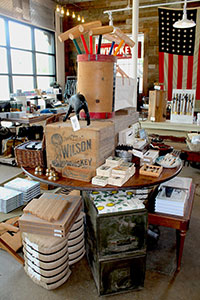 Snead said “We’re just different. I don’t feel like there are other stores like this anywherearound. There are so many different products here, but it all has a cohesive feel and style.”

All part of the plan

Part of the focus of Wilson Gardens, which supplies several Memphis eateries, is education about nutritious eating and sustainable farms.

A few yards away is the stylish Wilson Cafe (see Let’s Eat story), an elegant, yet down-home, can’t-miss place run by three Memphis-trained chefs who elevate country cooking to a whole new level. Among their secret ingredients is produce sourced as locally as possible — from the conscientiously farmed Wilson Gardens across the street, another of Wilson’s long-term projects. Led by Leslie Wolverton, a master agronomist who serves as farm director. Wilson Gardens pursues sustainable farming methods. A farmer’s market operates inside an event center called The Grange there on the premises of Wilson Gardens.

The Grange event center located on the grounds of Wilson Gardens. photo by Jenny Boulden

Next to the cafe is a historic theater to be restored, then several other locally owned shops and
boutiques, a grocery, the public library, offices of The Lawrence Group, a bank (also being
restored), the local post office and the site of the Hampson Archeological State Park’s new
museum. Expected to open next summer, the museum will showcase a singular collection of
Pre-Columbian artifacts from the local Mississippian culture, such as effigy pots and masks
recovered from a nearby site.

Wilson is located just 13 miles away from the home where Johnny Cash grew up, along the
“Blues Highway” that runs to the Mississippi Delta, and it takes its music seriously. The Wilson Music Series concerts held throughout the year bring major talents like Phil Vasser, Sammy
Kershaw, Grace Askew and John Oates to the tiny town.

Down the road, Wildwood Mansion is a former Wilson family home now used as the
administration building (complete with a Hogwarts-lookalike dining hall) for The Delta School,
which has a fascinating story in itself. The town’s independent school is built around the core
concept of teaching to each child’s particular strengths, whether they’re artists, growers or
makers. Even at a visual level, its modernist campus, carefully maintained gardens (managed by
schoolchildren), Wonderspace playground and Tudor Revival mansion set it apart from any
other school in the state.

All of this is to say that what’s most exciting today is not Wilson’s storied past, but its inventive
energy now. Backed by its investors and guided by savvy leadership, the town’s citizens have an
optimism and “Why not?” spirit that is positively contagious.

“Sometimes I do get frustrated that there isn’t more here yet,” admitted MaHarrey, who lives
in a small apartment complex with “a bunch of other young Memphis hipsters” who ended up
in Wilson. “I have to remind myself that this is a 30-year master plan, and we’re just getting
started here. It’s exciting.”