With Crater of Diamonds State Park’s search field open again, two visitors on an average day are rewarded with 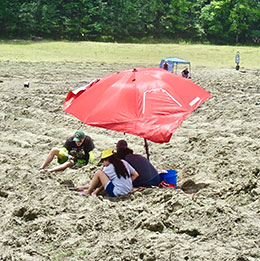 a thrill well worth all that digging in the dirt.

These fortunate folks strike it lucky at “the only diamond-producing area in the world open to the public,” as the Crater of Diamonds brochure boasts about the 37.5-acre dig. They’re joining the more than 33,000 visitors who’ve found precious gems since the site near Murfreesboro became a state park in 1972.

At this unique attraction, any unearthed diamond can be kept as a prized memento or put up for sale if valuable enough. After digging resumed following a two-month closing due to COVID-19, the 12th largest diamond in the park‘s 48-year history was found in late June. Dr. Mindy Pomtree of Benton spotted the glittering gem, weighing 6.39 carats — about the size of a pumpkin seed.

Dr. Pomtree chose to name her diamond Serendipity, because she was lucky to have found it without digging. “I did a little research on how to find diamonds beforehand,” she said. “But it turned out to be a walk that resulted in my find. It was a thrill!”

That excitement is shared by James “Caleb” Howell, the park‘s superintendent. “We are all aware of the value 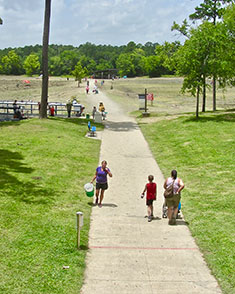 A path runs between the Crater of Diamonds visitor center and the dig area. photo Marcia Schnedler

and desire for diamonds in general,” Howell says. “Diamonds bought from stores are special, but they have been certified by many people along the way. If you find a diamond here, you are finding the gem in its original volcanic soil. Chances are that nobody else has ever laid eyes or hands on that diamond. It is personal to you.

“As the park superintendent, when guests find a diamond, I get a passing glimpse of the magical connection between them and the experience. It energizes me each and every time. But I’m only feeling a secondary emotion compared to the elation of the actual finder. It is very special.”

The reopening of the diamond field comes with restrictions aimed at warding off the coronavirus. Most notable is the requirement for prepaid reservations, to be made at the park’s website: arkansasstateparks.com/park/crater-diamonds.
To allow for proper distancing, admissions are limited to 800 per day, a total sold out ahead of time most Saturdays and Sundays this summer. A ranger stationed at the park entrance turns away vehicles lacking a reservation printout.

Without this rule, Howell says, Crater of Diamonds would be overwhelmed on its busiest days. The highest single-day total in the past decade was 2,628, on Memorial Day weekend in 2017. The figure on busy summer days regularly has exceeded 2,000.

Other regulations include the wearing of protective face coverings in the visitor center and other areas where groups gather. No diamond-mining tools are available for rental. On the search field, individuals and families not wearing masks are asked to stay at least 12 feet from other diggers.

As of press time, the Diamond Springs Water Park near the visitor center remained closed, but there are plans to reopen it sometime during the summer. Walking trails, picnic areas and the 47 camp sites for RVs are open. Before going, it makes sense to check the park’s website for updated information

Diamonds in the rough

On permanent display at the visitor center is a gem dazzling enough to inspire even a doubtful digger. It’s the 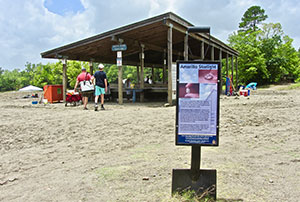 A shovel marking a major find stands near a Crater of Diamonds washing shed. photo by Marcia Schnedler

Strawn-Wagner Diamond, the most perfect diamond ever certified by the American Gem Society.

The 3.03-carat Strawn-Wagner, discovered at the park by Shirley Strawn in 1990, was graded at the very top rank of “Triple Zero” and cut to a 1.09-carat round brilliant shape. It is estimated that only one mined diamond in a billion weighing a carat or more is that perfect.

The visitor center provides a brisk history of Crater of Diamonds, starting in 1906 when John Huddleston found two crystals on his farm near Murfreesboro. Once they proved to be diamonds, he sold the property to Little Rock investors.

Several efforts at commercial mining failed in the next few decades, although the largest diamond ever unearthed in the United States was discovered here in 1924. Named the Uncle Sam, it weighed 40.23 carats. Later cut into a 12.42-carat stone, it was bought in 1971 by a private collector for $150,000.

Crater of Diamonds operated as a privately owned tourist attraction from 1952 to 1972. Then the state of Arkansas bought the land to create the park. While the Strawn-Wagner is the most perfect diamond discovered since then, the largest is the Amarillo Starlight, found in 1975 and weighing 16.37 carats. Its location and those of other major finds are marked with upright shovels.

Finding a diamond may be mostly a matter of luck, but a park pamphlet offers several tips to improve a digger’s chances:

As superintendent since 2013, Howell has become an astute observer of human behavior at the park. Although very few visitors actually find a diamond in the plowed field, he says that “most are still quite happy with the experience. But some do get upset.”

When couples come, “one may be highly interested in digging, while the other is there only to be supportive. I’ve 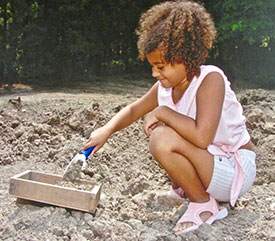 A girl digging for gems is pictured at Crater of Diamonds visitor center. photo courtesy of Department of Parks Heritage and Tourism

seen that person sit in the visitor center reading a book and never even entering the mining field.”

As for children, “Some are bored within 15 minutes and already bothering their parents to leave,” he says. “Others want to stay all day long. They love it — because their parents are finally encouraging them to play in the mud.”

Admission, with advance purchase required, is $10 for adults, $6 for children 6-12, free for children under age 6. 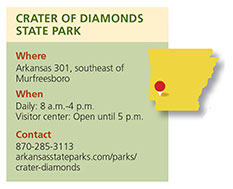