While working for the Fort Smith Lumber Co. as a company physician in 1907, Dr. T.W. Hardison found 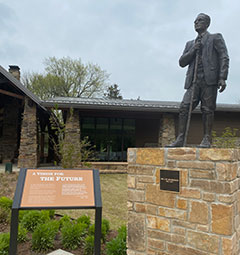 Statue of Dr. T.W. Hardison at the visitor center entrance.

another calling to a life already filled with service.

In addition to medicine, Hardison would become the founder of Arkansas’ State Parks system, serving it in various roles for decades until his death in 1957. It all started when he accompanied one of the company’s crews to a rugged, remote area atop a mountain in the Arkansas River Valley, where they inspected the profoundly scenic area for logging. Fortunately for Arkansas, the company decided that logging there would be too costly and difficult to pursue. Hardison, who quickly became enthralled with Petit Jean Mountain, a place where he and his wife would move and make their permanent home, suggested that the area be preserved. “The trees might as well be left to live out their lifespan unmolested by axe and saw, and the area converted into a park,” he later recounted of his first visit.

His dedication to those trees and the mountain led to the formation of the Arkansas State Parks system. His 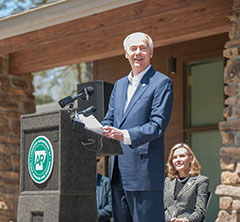 Gov. Asa Hutchinson spoke at the dedication for the new visitor center.
Arkansas Department of Parks, Heritage and Tourism

role in creating Arkansas’ first state park is highlighted at the new 11,672 square-foot park visitor center named for him.

“Today, we honor him, Dr. Hardison, for his role in preserving Petit Jean and as a champion for state parks,” Gov. Asa Hutchinson said at the April 22 dedication of the Dr. T.W. Hardison Visitor Center. He added, “Our state park system is the crown jewel of the tourism industry in Arkansas.”

Visitors to the park will want to make the center their first stop. Here they will find information about camping, boating, lodging and hiking, as well as interpretative programs. Interpretive exhibits tell the story of the history and geology of Petit Jean Mountain, as well as the flora and fauna of the park. There’s a gift shop with camping essentials and souvenirs, meeting rooms and staff offices. 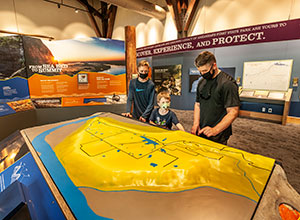 Interpretive exhibits tell the story of the history and geology of Petit Jean Mountain.
Arkansas Department of Parks, Heritage and Tourism

The center’s design reflects the rustic style of the original park buildings, which were constructed by the Civilian Conservation Corps (CCC) during the 1930s. Fenel Purifoy Architects designed the building, and Kinco Constructors built it at a cost of $6,995,670. Funding was provided by the Amendment 75 Conservation Fund and a grant from the Arkansas Natural and Cultural Resources Council.

At the entrance to the center is a life-size figure of Hardison made of foundry-cast bronze. It was sculpted by artist Andrew Jumonville of Taylor Studios, Inc. In addition to the statue, Taylor Studios, working with state park interpretive staff, designed and built the exhibits.