A quilt is not always quilted. These days, it may be a colorful pattern painted on wood and
displayed on the wall of a barn or other building as part of the expanding Arkansas Quilt Trails
network.

Travelers passing through any of five counties — Stone, Searcy, Van Buren, Perry and Baxter —
can admire some of these 100-plus artworks often called “barn quilts.”

They’re posted in growing numbers as roadside labors of love, part of a nationwide
phenomenon spearheaded in Arkansas by volunteer coordinator Renee Carr, who set up the
initial Stone County trail with friend Glenda Osten. Official quilt trails in at least 10 other
Natural State counties are in the works. 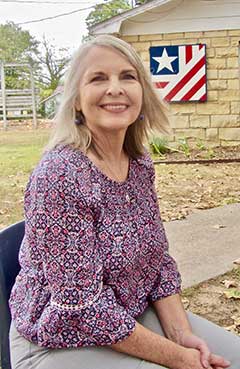 Renee Carr of Mountain View is the volunteer coordinator of Arkansas Quilt Trails. Behind her, the “Patriotic Flag” quilt block hangs on the Veterans Affairs office on the grounds of the Stone County Courthouse. photo Marcia Schnedler

“A quilt trail is a rather new sightseeing destination, dating back less than two decades,”
explains 58-year-old Carr, a Mountain View native and a certified public accountant with a
home office in Fox. “But the inspiration comes from the time-honored tradition of quilting.

Quilt trails are popping up all over America. But one thing a little bit different in Arkansas is that
we are trying to focus on local history — telling the stories behind that history. “And it’s more than just making our communities beautiful. It’s also the way we can tell visitors about either the people or the place, and even the quilting tradition.”

There is also a practical point to the trails, scattered in both rural and town settings. As Carr observes, “The quilts are a tourist attraction of a very special kind. They’re not seasonal like so many of our state’s other attractions. Tracking them down can be a fun family road trip for a morning or afternoon.”

The tourism potential is emphasized by Darryl G. Treat, Searcy County’s quilt trail coordinator. He is also executive director of the Greater Searcy County Chamber of Commerce, which funded the first half-dozen local quilt blocks in 2017 and still provides some money for new
ones. 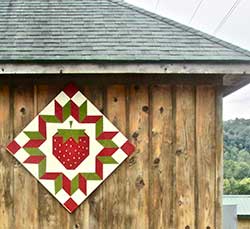 says. “Although we work for that to happen, we have to simultaneously pursue lots of small
efforts that will collectively add up to boost our local economy.”

The quilt trail, he says, “is exactly that. It’s a small, cost-effective project that, along with
other small Chamber of Commerce initiatives, actually helps the county economically by
attracting visitors. It also beautifies our county and helps to encourage and promote the arts.
We win multiple ways!”

Finding quilt sites in the five counties is simplified by a recently published brochure that pictures most of the artworks in color and pinpoints their locations on a map. Available at state welcome centers, the brochure also can be downloaded 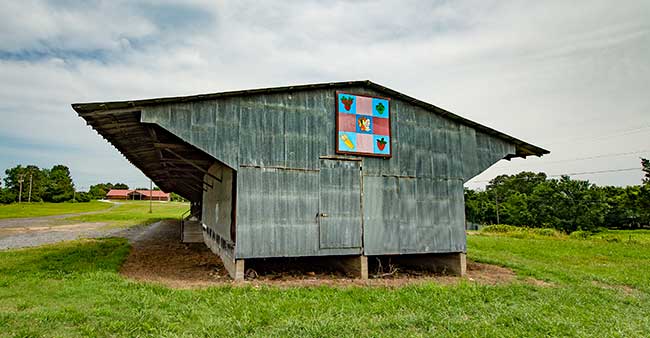 The “Berry Shed” quilt block in Marshall “captures the rich agricultural history of Searcy County that was once known as the ‘Strawberry Capital of the World,’” Courtesy of Arkansas Department of Parks and Tourism

from ArkansasQuiltTrails.com. The site also offers detailed accounts of the quilt patterns and what they represent — a resource well worth printing out for the fullest enjoyment of a quilt hunt. 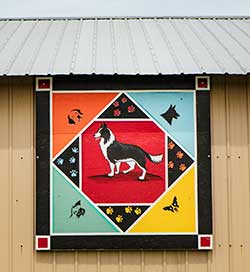 Located at the Searcy County Fairgrounds in Marshall is the “Canine” quilt block. Courtesy of Arkansas Department of Parks and Tourism

qualified quilt panels. The brochure numbers each one by county and by the order it was put up. As Carr explains, “You know the accountant in me. I had to have an orderly way of keeping
track.”

The first, numbered 1-1 and 1-2 in Stone County, actually were painted some years before the
Arkansas Quilt Trails project was formalized late in 2016. Like a few others, they were earlier
efforts by locals who had heard about quilt trails in other states — as Carr had in visiting North
Carolina a decade ago.

They were created by Carol and Don Adams at their farmstead on Luber Mountain Road,
several miles south of Mountain View. After the couple enrolled in the quilt trail, Carr called to

“Mariner’s Compass” is on the lot of the historic Gilbert General Store, which the Arkansas Quilt Trails website points out is “a short walk from the Buffalo National River . photo Marcia Schnedler

ask if they’d had any visitors yet.

“Carol told me, ‘Yes, we already have, and the first car that stopped had California license
plates,’” Carr recalls. She adds with a chuckle, “Though I don’t suppose they’d come all the way
from California to see the quilt blocks.”

Carol Adams gives a tender account on the trails website of their initial quilt, displayed on the
family barn. Like many of the descriptions for the five counties, it reflects nostalgia, while also
connecting the painted works with the sewn quilts long ingrained in rural and small-town life in
Arkansas and elsewhere.

“Quilts, for my family, have always been very special,” she writes. “They were essential to
warmth in the winter, and they brought us, our family and friends together in a social
community. 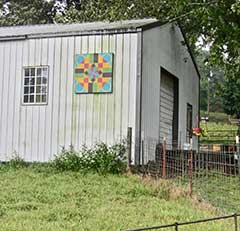 them. Now, I enjoy painting and showing my barn quilts. There are four on our property.”
“Bear Tracks,” the first one, shows a stylized set of images in four colors. Resembling leaves as
much as bear tracks, the design is based on a family quilt pattern more than a century old.
“Windmill,” their second, aims to evoke “the continual wind that blows on our mountain.”
Since joining the quilt trail, the Adamses have added “Turkey Tracks,” which hangs on the side
of their house and “reminds us of the turkey calls we hear outside.” Their fourth piece of art,
hanging on the front porch, is a playful geometric pattern, “Basket in a Basket.”
Art with heart

The state’s quilt-trail champion, in terms of quantity, is Debbie Park. She and husband, Tommy, 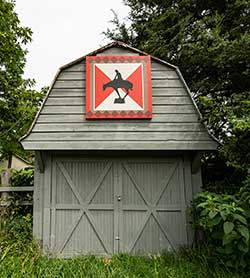 The Arkansas Quilt Trails website notes that the “Bob Russell” quilt block in Marshall is named in memory of a local cowboy. Courtesy of Arkansas Department of Parks and Tourism

have put up eight of them at their Double D Lazy T Ranch, a bed-and-breakfast property a
couple of miles west of Perryville. Their Perry County place boasts seven quilts pictured in the brochure, while the eighth was added this summer. “And yes, another is being prepared,” Park says.

Her earliest creation dates back to 2011, after she’d read about an Ohio woman who’d painted
a barn quilt to honor her mother, an inveterate maker of bed quilts. “The more I read that story, the more I was hooked,” Park says. “But the problem was that I didn’t have a clue how to begin. I couldn’t get any information about the Ohio project, so Istarted out on my own.

Only later did I realize what a challenge I’d undertaken.”
That first quilt, “The Ohio Star,” a nod to her inspiration, wound up being 8 feet by 8 feet. She
needed two weeks to paint the plywood, “and it took two grown men and a tractor to hang it 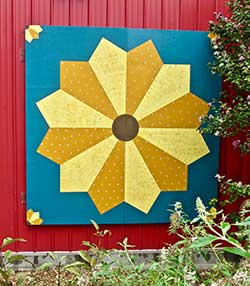 The “Dresden Plate” quilt block is located on the Meeting Place building on the back lot of the Wildflower Bed & Breakfast in Mountain View. photo Marcia Schnedler

on the hay barn.” Since then, “I have repainted it, because the colors were a little dull for my
liking. I also added our ranch logo to the middle of the star: DDLazyT.”

Park had done five blocks by the time she heard about Arkansas Quilt Trails and talked to Perry
County coordinator Trinity Neely, who steered her to Carr. After that meeting, she says, “my
interest grew exponentially.”

The quilts, she says, “ have created a lot of interest along Highway 60, especially when I’m
suspended in the air in the tractor scoop or standing on a ladder painting the silo. People steer
into our driveway to see up close, which is perfectly fine.”

One September day, Park says,“I came home from the grocery store and found a car with Texas plates parked 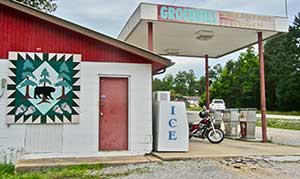 in front of our bed-and-breakfast. It turned out to be the nicest couple from the Houston area, who told me they had traveled to Arkansas just to see the quilt trails. They’d been in Stone County the previous night.”

A squat silo holds Park’s favorite quilt, which she painted for the round structure “to turn what was an eyesore 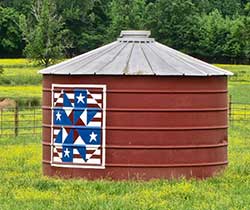 A silo is the canvas for “Patriotic Pinwheel” near Perryville. photo Marcia Schnedler

that I couldn’t give away into a thing of beauty. I named it ‘Patriotic Pinwheel’ for the colors. Since the silo was freshly painted barn red, I only had to use blue and white paint.  “I love having a structure that my Dad used for years brought back to life.”

The Parks, like most of the quilt creators, are not practiced artists — although some of the
blocks have been painted by professionals, notably in Searcy County.

ArkansasQuiltTrails.com includes more than a page of how-to instructions. These include using specially treated 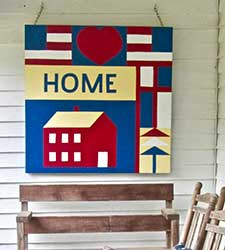 plywood and high-quality exterior paint, as well as applying several coats of primer before
starting to trace the design.

To qualify for trail status, a design pattern needs to be approved by the county coordinator and
Carr’s state committee. Their contact numbers are also on the website. Designs should be
submitted for approval before being painted, largely to prevent duplication. And the story
behind each block needs to be provided.

Once the pattern is accepted, the quilt’s creators sign an agreement allowing promotion of the
new location on the website. If someone is not open to having visitors stop and look, Carr says,
“then being on a trail is not for them.”

Carr has designed two painted quilts that speak eloquently to family history dating back to the
Civil War era. They can be seen along Arkansas 9 at the southern edge of Stone County on
opposite ends of a barn owned by her father, Rodney Rushing. The south-facing pattern is the
Confederate star, painted by her husband, Philip. Facing north is the Union star, painted by
Glenda Osten. 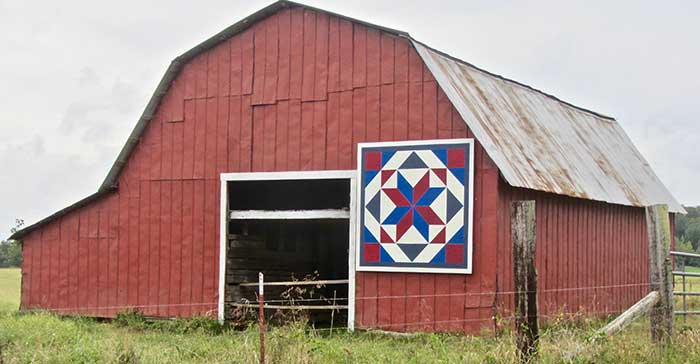 This 19th-century story is amplified by Carr on the website. With the families living just a mile
apart, a Hinkle daughter and a Rushing son married each other in 1888. They were her great-
grandparents.

According to Carr,  “My father’s parents told him that the two families did not talk about the Civil War. Likely it was such a sensitive subject, with the men having fought for opposite sides,
that they believed it was best to move on and leave it in the past.”

Although some new types of visitor attractions turn out to be little more than a passing fancy,
Carr believes “this will have staying power. Think of the quilting tradition itself. Think how old it
is.”

That’s true in her family, as she tells the story of the 2008 tornado that destroyed their two-
story home. Nobody was badly injured, but the house was virtually leveled. Amid the rubble,
two heirloom possessions survived.

“Each of my grandmothers, back when we graduated from high school, made us a quilt,” she
says. “Finding them intact was such a joy amid the ruins. I still sleep under them today. And I
think of them sometimes when I’m looking at our two barn quilts.”