A sign near a pond at Arkansas Alligator Farm and Petting Zoo in Hot Springs marks the likely landing spot of a fabulously long home run hit on St. Patrick’s Day 1918. It was swatted by a young Boston Red Sox pitcher destined to become the most famous slugger in baseball history.

Babe Ruth launched the titanic clout, measured at 573 feet and ranked among the longest homers ever, during an exhibition game at old Whittington Ball Park. The Boston Globe reported that “it

not only scaled the right-field barrier but continued on to the alligator farm, its intrusion kicking up no end of commotion among the gators.”

Hot Springs, with its shadowy gambling and other diversions, became a favorite haunt of Ruth and numerous other big-league stars. The Spa City was a popular host to spring training, starting in 1886 and continuing into the Roaring ’20s, before major-league teams shifted to reliably warmer Florida and later to Arizona.

Nostalgia for those decades when baseball truly ranked as “Our National Pastime” is now celebrated as a tourist allure in Hot Springs. Visitors can drive the Hot Springs Historic Baseball Trail, marked with plaques saluting Ruth and other players who sweated out their winter excesses in the Central Avenue spas. Added information at stops is available via a cellphone app.

A dazzling highlight  on the trail is a huge mural picturing the Bambino in his New York Yankees uniform along with four other stars on giant baseball trading cards.

Completed in December 2018 , the outdoor art a bit south of Bathhouse Row spans 160 feet. It shows southpaw Lefty Grove hurling a ball into a catcher’s mitt past the images of Ruth, Honus Wagner, Jackie Robinson and Satchel Paige. All five are in the Baseball Hall of Fame.

“Until a decade or so ago, very little attention was paid to our spring-training history,” Arrison says. “I would guess that a majority of our citizens were not aware of it until we started promoting it. Now it is a point of civic pride.”

An early step came in 2011, when the commission issued a series of postcards with photographs from the Garland County Historical Society that depicted Ruth in Hot Springs. The cards were popular, Arrison says, “and 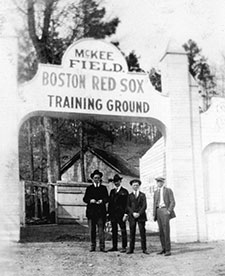 Local musicians at the entrance to McKee Field, circa 1921. The Red Sox had left Majestic Park in favor of McKee Field in 1921. Also in 1921, the name “McKee Field” replaced the name Whittington Ball Park

made us realize how much interest there could be in our baseball history.”

After local baseball historian Mike Dugan researched the story of the stupendous 1918 homer, he and Ruth expert Bill Jenkinson worked with the Hot Springs firm B&F Engineering to measure the blast.

“We had several aerial photos of Whittington Ball Park,” explains Dugan. “And since a section of the old concrete bleachers still remain, B&F was able to graph the exact location
of home plate.  A marker was placed there. Then B&F was able to access a satellite to read the exact distance to the center of the marked alligator pond.”

With a wry smile, Dugan asks rhetorically, “True science? Well, as my dad used to say, ‘Good enough for government work.’ I honestly feel comfortable that we are very close, if not dead on, for the distance.” He calls the home run “truly the stuff of legend and fact coming together.”

Historian Jenkinson “was astonished at all the baseball lore here. He told us we should create a baseball trail. I jumped on the idea: Build it, and they will come!” Arrison says, using a quote from baseball movie Field of Dreams.

Arrison and Dugan enlisted other baseball historians to help pinpoint noteworthy facts about spring training in Hot Springs. That history began in 1886 thanks to a motivation embedded in the title of a book by former Arkansan Don Duren: Boiling Out at the Springs. The book, which labels Hot Springs “the Cradle of Spring Training,” cites a front-page story in the very first issue of The  Sporting News. Dated March 17, 1886, it reported that the Chicago White Stockings (later the Chicago Cubs) were departing the Illinois metropolis for Arkansas.

A correspondent for the publication, later renowned as “The Baseball Bible,” wrote that team owner A.G. Spalding was taking his team to Hot Springs “to boil them for two weeks.”

The story quoted Spalding: “It’s a great scheme. All the boys are enthusiastic about it and all want to go. I have 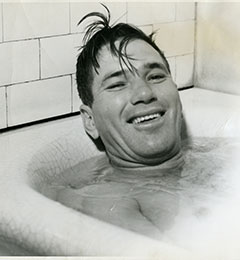 Jay Hanna “Dizzy” Dean relaxes in a thermal bath circa 1934-1938. He was in Hot Springs to instruct at Ray Doan’s baseball school. Courtesy of Garland County Historical

written a professor down there, and he is making arrangements to build a vat in which he can boil the whole nine at once.”

It’s not clear whether or not Spalding was joking about the giant vat. But his comments continued: “I’ll boil out all the alcoholic microbes, which may have impregnated the systems of these men during the winter while they have been away from me and [manager Cap]Anson. Once we get the microbes out, the danger of a relapse is slight.”

Dugan points out that “this was considered the ‘Emerald Age’ of baseball, because many of the major league players were hard-drinking Irishmen, from the Emerald Isle.”

Back in Chicago, he says, “the White Stockings proceeded to win the National League pennant. So just like today, what do aspiring businesses do? They copy the winner. This brought other clubs to town over the next four decades.”

By the first years of the 20th century, Hot Springs brimmed in February and March with training camps for the 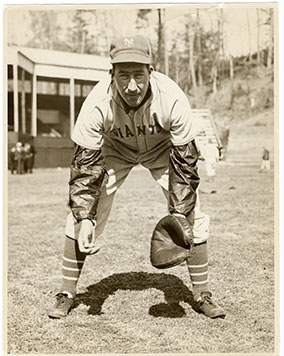 Red Sox, the Pittsburgh Pirates, the Brooklyn Dodgers, the Cincinnati Reds and other teams. That era is fondly retold in the 2016 documentary The First Boys of Spring, directed by Larry Foley and narrated by Billy Bob Thornton.

The rise in popularity became nearly overwhelming, as reported by The Sporting News in 1911 under the headline “Crush at Springs.” The secondary headline elaborated: “Ball players so many they are in each other’s way. Full crews and detached members of other squads in a profusion that is most bewildering.”

That crowding eased and ended during the 1920s as Florida’s more reliably warm weather began luring teams farther south. Mosquito abatement made the Sunshine State a healthier and more comfortable place to train.

Another factor in the exodus was what a Sporting News headline called “the red lights and wide-open policy” of the Spa City. According to Baseball magazine, team owners and managers were complaining “that Hot Springs is too blamed hospitable, and that the delightful life of the Arkansas resort is too full of frolic and fascination for the players.”

In 1925, as Dugan reports, those Hot Springs frolics played a role in Ruth’s widely headlined illness that became 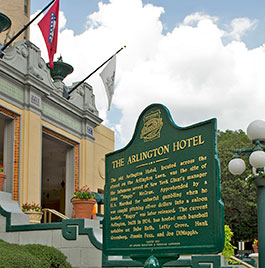 Outside the Arlington Hotel, a plaque reports the vintage property was a favorite of Babe Ruth and other baseball stars. Courtesy of Garland County Historical Society

known as “the bellyache heard round the world.”

The Yankee star “spent about three weeks in Hot Springs before continuing to Florida to join his team for spring training,” explains Dugan. “By many accounts, he was having a grand time. While the idea of coming here was to ‘boil out’ the winter’s extremes, the Babe knew that Hot Springs provided all the excesses he enjoyed.”

Ruth had come to Arkansas weighing 260 pounds, 40 pounds over the weight the Yankees wanted. According to Dugan, “He later arrived for Florida training in terrible shape from whatever excesses he’d continued to enjoy in Hot Springs. He also caught the flu.”

After a couple of collapses, Ruth underwent surgery in New York for what was described as an “intestinal abscess.” He missed seven weeks of the season and then performed below par. After that, his contracts included a clause forbidding him to spend any time in Hot Springs. He returned for golf and other diversions only after retiring in 1935. 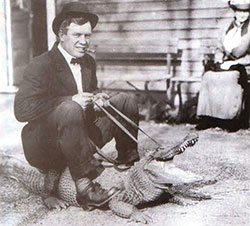 archival photo of Hall of Famer Speaker. The Cleveland Indians’ outfielder is posed in suit, bow tie and jaunty hat. He’s puffing a cigar while perched on a stuffed alligator’s back and holding reins attached to the big reptile. He’s clearly not in training.

Observers of cultural change may note that two of the five Hall of Fame players portrayed on the city’s big baseball mural are black Americans. That’s despite the fact that all the major leaguers who did their spring training here were white.

Only in 1946, well after the exodus to Florida and later to Arizona, did organized baseball finally drop its color barrier when Jackie Robinson took the field in the Dodgers’ farm system. Satchel Paige, a longtime star in the Negro Leagues, joined the Indians in 1948. Both played in Hot Springs only in barnstorming exhibition games.

That was the past. In the present, when the coronavirus outbreak has hit the vital tourism industry of Hot 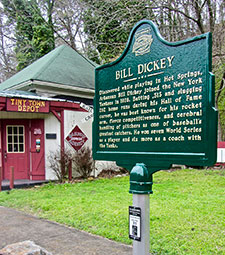 Springs, officials are hoping that the city’s baseball heritage can help bring back visitors after the pandemic has eased.

An event that could play a role is the third annual Hot Springs Baseball Weekend, now postponed from spring until Aug. 14-15. Festivities are scheduled to include appearances by four former St. Louis Cardinals: Ted Simmons, Steve Carlton, Al Hrabosky and Lee Smith.

Simmons, Carlton and Hrabosky are returning for an encore “because of the overwhelming response to their appearances at last year’s Baseball Weekend,” Arrison says. They’ll be joined by Smith to take part in panels, question-and-answer programs and autograph sessions free and open to everyone.

If the COVID-19 prognosis by then allows festivities to proceed, the weekend will mark a heartening step in the return to normal life — while celebrating Hot Springs’ role as “the Cradle of Spring Training.”

Information on the Hot Springs Historic Baseball Trail, including a map and details on the 32 stops, is available at hotspringsbaseballtrail.com. The number for the self-guided cellphone tour is 501-545-2036.

A new inning for Hot Springs

Hot Springs is at bat for a new burst of baseball, a century after spring training’s prime time here, by building a 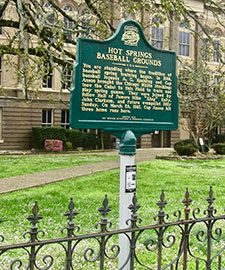 A plaque outside the Garland County Courthouse marks the site of Hot Springs Baseball Grounds, where the Chicago White Stockings trained.

The city is taking bids to construct Majestic Field Baseball Complex on the former site of the Boys and Girls Club of Hot Springs — at the corner of Carson and Belding streets about a mile south of Bathhouse Row. Progress has been slowed due to coronavirus challenges, with a completion date of mid-summer 2021 now forecast.

Says  Mike Dugan, a baseball historian actively involved in the effort, “We are very excited about this project and a little frustrated about not being farther along. Bids have been slow coming in with so many companies stressed by COVID-19.”

As for the aims of the ambitious project, Dugan says, “We have not had a city youth baseball program in five years now. Our hope is for the fields to host a robust city-league program Mondays through Thursdays, with a full schedule of weekend tournaments that will boost visitor numbers and benefit our hotels and restaurants, as well as stores.”

Referencing Hot Springs’ baseball heritage, he adds, “The chance for not only local kids but visitors to play on the same grounds as Babe Ruth, Tris Speaker, Cy Young, Hank Aaron and Jackie Robinson is exciting.”