Potatoes are a staple food item for many Arkansans, and they are the No. 1 nongrain food crop in the world. In the United States, over a million acres are planted each year for commercial production. Potatoes are easy to grow in a home garden, and it is time to plant. 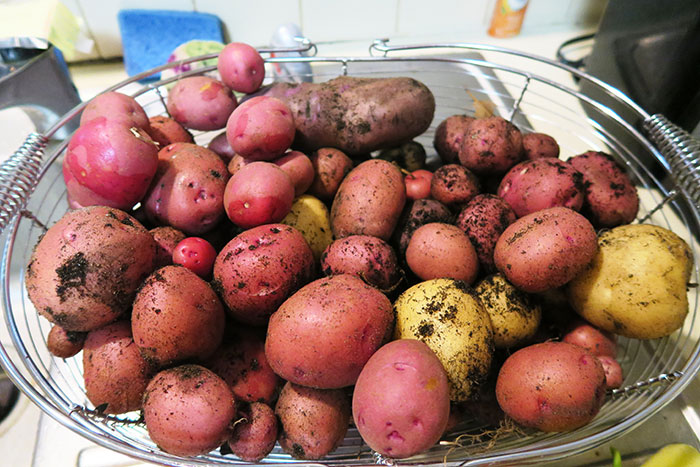 In addition to white and red varieties, we have blue and purple as well.

Potatoes are native to America and were cultivated from Chile to New Grenada at the time the Spanish explorers reached South America. The Spaniards introduced the species to Europe soon after 1580, and the popularity of potatoes spread across Europe and the British Isles by the end of the 17th century. In 1719, Irish immigrants introduced white potatoes to New England, and now white potatoes are often called “Irish potatoes.”

Potatoes are in the nightshade or Solanaceae family, the same family that produces tomatoes, peppers and eggplants. While these other vegetables are warm-season plants, potatoes are a cool-season vegetable that we plant in late winter or, if available, late summer for a fall crop. You can sometimes plant in February, but you want the soil temperatures to be around 45 degrees or higher. Most gardeners plant in March in Arkansas, but the official planting time is from late February through early April.

Potatoes are planted from seed potatoes, not seeds. It is best to start with certified seed potatoes, which are grown under strict standards to make sure they are disease- and virus-free. Using leftover small potatoes from previous years or using those from the grocery store could lead to disease issues. Seed potatoes are readily available now at most garden centers and nurseries.

Today, we have choices that include the white and red varieties, but also blue and purple forms. When planting seed potatoes, look at the size you are using. Small tubers that are no more than an inch or two in diameter may be planted whole. Larger tubers can be cut into smaller pieces but make sure each piece contains at least two or three “eyes.” The site where you plant them should be well-drained, loose soil. Heavy, wet soils will lead to rotting.

Work in a complete fertilizer as you are preparing the site. Then plant your seed potatoes 3 to 4 inches deep in the soil. When the plants are about 6 inches tall, fertilize along the sides of the plants — called side dressing — and then mound some soil lightly over the plants. Adding soil to the plants is called hilling, and you will gradually build up a low ridge of soil up to 4 to 6 inches high. This will prevent the growing tubers from breaking up into the sunlight, which can cause them to turn green, and will also encourage more root formation and better production. 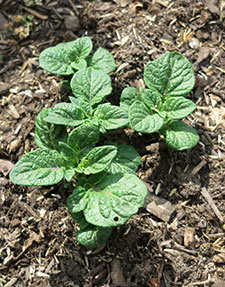 When the plants are about 6 inches tall, mound some soil lightly over the plants.

A potato is not a root, but an enlarged underground storage organ called a tuber. Tuber formation begins when the plants are 6 to 8 inches tall. Maximum tuber formation occurs when soil temperatures are between 60 and 70 degrees. The tubers fail to form when the soil temperature reaches 80 degrees. Try to keep your beds watered to ensure even moisture. Uneven moisture levels can lead to knobby growths on the tubers. Soils that are too wet can lead to decay.

Rotate where you plant your potatoes each year to cut back on disease issues. There are a number of diseases that can affect potatoes, but with clean seed potatoes, rotation and attention to care, diseases can be held to a minimum. If you suspect problems, take a sample in to your county extension office for diagnosis and control options.

Potatoes are ready to harvest as the plants start to yellow and die back — anywhere from 70 to 130 days, depending on variety. If you want to harvest some smaller “new potatoes,” they are usually ready when the plants begin to bloom. You don’t have to dig up the whole plant, just lightly work your hands in the hilled soil and quickly remove some of the smaller potatoes. Then mound the soil back and allow the remaining tubers to continue growing. When you are ready to harvest, you can do it by hand in a small garden or use a spading fork. Be careful that you don’t damage the tubers in the process. Any that get nicked or bruised should be eaten first, as this can lead to decay. Occasionally, we get calls from gardeners reporting that their potato plants have produced “tomatoes” on top. Remember that they are related. Sometimes the blooms on a potato plant do result in fruit. They look like small green tomatoes and contain true seeds for potatoes. They are not edible, and the seeds will not breed true to variety.

Potatoes can be grown in a traditional garden, in containers and even in straw bales. The end results are tasty as well as nutritious.  Potatoes are a great source of vitamin C, potassium, fiber and protein.