It’s not just the name that makes Heidi’s Ugly Cakes stand out. 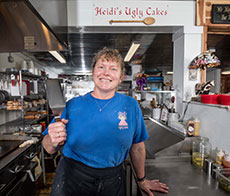 The name is memorable, but what really transforms this venue into a gem is the owner, Heidi Price.

Her genuine smile greets all customers, and as they leave, she often wishes them a “blessed day.” Regulars get great big bear hugs before they depart.

There are many regulars, including out-of-towners. Stan Erikson of Mountain Home drives in once a week for a Reuben. If he misses a Tuesday, Heidi calls to check on him.

“She has the best Reubens I’ve had in my life,” he says. “I won’t get them anywhere else — it would be like 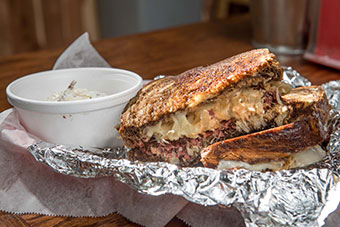 In addition to cakes, Heidi’s Ugly Cakes is known for sandwiches, including the standout Reuben.

cheating on your wife.”

One visit and it’s easy to understand why locals and tourists flock to her restaurant. Last September, Heidi, who rented different locations over the years, debuted her own spot, a stone building from 1927. Her husband Paul gutted it and built the tables, benches and much of the interior.

Heidi says she wants customers to feel like they are eating in her kitchen.

The last location seated 25; this one seats 55 inside and out.

A former volleyball player in college, Heidi has a degree in health education with a minor in nutrition. She laughs and says she can’t believe she ended up being a “sugar pusher,”  as it’s her cakes that have made her famous in this region. How she became a sugar pusher is a story itself.

Heidi is a Florida native but met her husband, a Yellville native, in college at the University of South Alabama.

In 2004, Hurricane Ivan destroyed their home. Eventually, Paul wanted to come back home, so they moved to Arkansas. Paul’s mother, Jan Price, owned the Shady Grove Country Store in Mountain Home. Heidi often baked for her mother-in-law. After tasting Heidi’s creations, Jan asked Heidi to bake for Shady Grove, which had a restaurant.

Heidi was agreeable, but there was one condition: Heidi doesn’t do fancy cakes, she only does “ugly.” Forget fondant and piped roses, she makes sheet cakes. It didn’t take long for those cakes to win over customers.

On Heidi’s birthday, Jan Price gave her daughter-in-law a sign that read “Heidi’s Ugly Cakes” and it became the name of her future business. The Mountain Home business closed and Jan Price passed away, but regulars who had come to love Heidi’s desserts begged her to open her own restaurant.

During my visit, I sampled the Holy Cow Cake. It’s homemade chocolate cake with vanilla caramel creamer, homemade caramel and crushed Butterfingers, topped with a sweet cream and cream cheese frosting with more Butterfingers on top. The cake melts in your mouth, but then you have the crunch from the Butterfingers.

“The first thing everyone says when they try it is ‘Holy cow, that’s good,’” he says.

The coconut cake is spectacular, too. A homemade yellow cake baked with sweetened condensed milk, cream 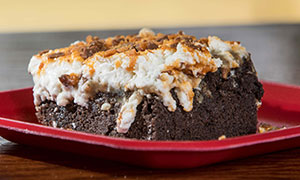 of coconut and coconut milk, it’s topped with cream of coconut and sweet cream and sprinkled with toasted coconut for texture. It reminds me of a coconut tres leches cake.

Some peanut butter pies can be overwhelming. But Heidi’s version — silky with a great balance of peanut butter flavor — is perfect.

I ordered the Reuben, and I don’t know what she does to make it so special, but it really is. The sandwich of melted cheese and corned beef comes served on nicely grilled marble rye that gives a good crunch when you bite into it. Instead of Russian dressing, Heidi serves creamy Thousand Island and doesn’t skimp on it.

A trip to Heidi’s Ugly Cakes kept me smiling from the food to the friendly atmosphere to the sign in the bathroom that reads: “Wash your hands and say your prayers because Jesus and germs are everywhere.” 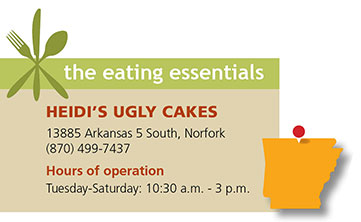