Forget canning — pickling is the modern way to preserve food. It’s easier, faster, doesn’t require special equipment and isn’t as nerve-racking if you have kids running around. In most of these recipes, I have different spice mixtures with the same vinegar solution over the vegetables, so the flavor in each jar is different. If one jar doesn’t appeal to you, double a recipe from another. Be sure to wash or sterilize the jars before beginning. 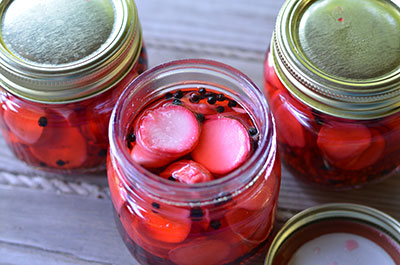 Half of a small jalapeño

In each jar, place ½ teaspoon peppercorns. Slice the garlic and divide it between the three jars.

In the first jar, add the dill seed and jalapeño. In the next jar, add cinnamon stick and cloves. In the third jar, add the celery and mustard seeds. Set aside.

Rinse radishes, trim the ends and then thinly slice. Divide radishes between each jar.

On the stove-top, bring white vinegar, apple cider vinegar, water, salt and sugar to a boil until the sugar dissolves. Using a funnel, pour the vinegar mixture over the radishes. Place the tops on the jars, but don’t seal. Allow the jars to set out for 30 minutes. Seal and refrigerate for 5 days before eating. These will keep up to one month in the refrigerator.

The radishes were the most popular of the items I pickled this summer because they’re so unique. I only pickled them because my husband bought a bounty, planning to go on a special diet, and he never tackled the diet. I hate to waste food, so I pickled them and served these as a side to cheese, salami and crackers, and with hot dogs, burgers and barbecue. Everyone raved. I don’t like plain radishes, but loved the pickled varieties. 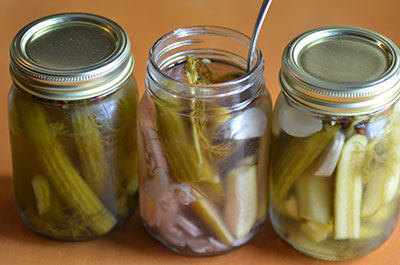 These are classic dill pickles with a hint of sweetness.

Rinse cucumbers and pat dry. Quarter each cucumber and place it in the jar to make sure it fits inside. Trim any edges that you need to make the cucumber fit.

Divide the fresh dill between the jars.

In one jar only, add the onion (just for slight variation).

Heat the salt, vinegar, sugar and water to a boiling point, then use a funnel to pour the solution over the cucumbers. Cover and allow to rest on the counter for 1 hour. Refrigerate for 5 days before eating. Consume within three weeks after opening. 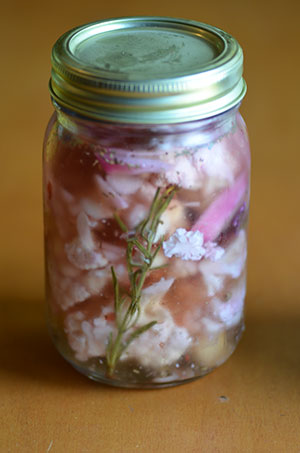 Cut cauliflower florets off and set aside. You will use about three-fourths of a head.

In the bottom of each jar, place ½ teaspoon black peppercorns and one sliced garlic clove.

In the first jar, add rosemary, lavender, dill seed and a few sliced onions. Set aside.

In a medium pot, bring apple cider vinegar, water, sugar and salt to a boil. As soon as it boils and sugar dissolves, use a ladle or funnel and pour mixture over vegetables. Cover and allow to rest 10 minutes on the counter. Secure the tops and shake the mixture vigorously to help dissolve the powdered spices. Refrigerate for one week before opening.

This will last for one month in the refrigerator.

I use carrots and onions to add color and a little sweetness; add as little or as much as you want.

Note: My wildcard recipe was the rosemary and lavender cauliflower, which was the most popular. 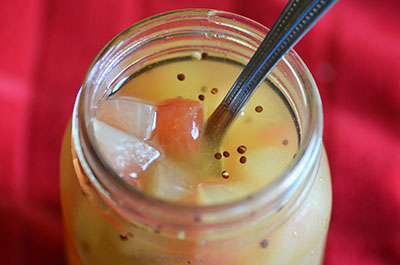 Scoop out melon, leaving ¼ inch of red flesh. Flip the watermelon over and peel off the exterior green skin. Chop melon into ½ inch cubes or smaller (don’t go any larger).

Peel the fresh ginger and slice it into thin pieces.

In a large pot, bring ginger, apple cider vinegar, sugar, cinnamon, clove, salt, garlic, mustard, cumin and celery seeds to a boil for one minute. Then gently add the watermelon and boil for 15 minutes. The rind should start to become translucent.

Remove from heat and allow the rind to sit in the mixture for 30 minutes. Then put the rind with the juices in jars. Seal the jars and leave them on the counter for one hour. Refrigerate for one day before consuming. You must eat this within three weeks and keep it refrigerated.

Pickled watermelon rind is a wonderful side with barbecue and smoked meats, or try it on kielbasa or hot dogs.

Juliana Goodwin is a food columnist, cookbook author and avid traveler. If you have a question, email julianalovesfood23@gmail.com.