Unless you have already reserved lodging, you will most likely not get to view this month’s full solar eclipse.

Arkansas, like most of the United States, will see just a partial eclipse on Aug. 21.

But be patient, says Darrell Heath, outreach coordinator and host of the University of Arkansas at Little Rock television show “The Night Sky.” In seven years, Arkansans will have their chance to be at the center of the eclipse action. 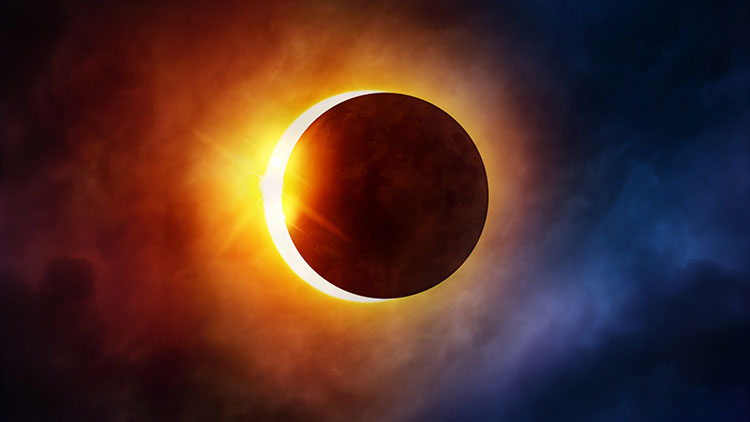 The “path of totality” of the next solar eclipse over the United States — on April 8, 2024 — will cut diagonally across Arkansas as it travels from Mexico to Maine and into Canada.

“There are people known as eclipse chasers who travel from all over the world to converge on these spots … and Little Rock will be directly in the path of totality,” Heath said of the 2024 eclipse. “It is very unique.”

This month’s solar eclipse will cross the United States from Oregon to the South Carolina coast. According to several national news reports, it is nearly impossible to find a vacant hotel room or an empty campground space in the path of totality. 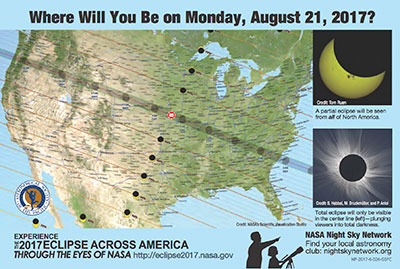 The path will be 70 miles wide and pass over a number of major cities, including: Salem, Ore.; Idaho Falls, Idaho; Kansas City, Jefferson City and St. Louis in Missouri; and Nashville and Columbia, S.C.

“Unless you have already made arrangements to be in the path of totality, it might be too late because millions, literally millions of people, are going to be converging within the path on the day of the eclipse,” Heath said. “This is going to cause epic traffic problems, and even the Department of Homeland Security is looking into the logistics of how to accommodate all these people on this narrow line of totality all across the states, and how it might cause problems for emergency vehicles as well as traffic.”

Heath said he reserved a campsite outside Lincoln, Neb., last year so he could see the Aug. 21 solar eclipse. He originally looked for a place to stay in Wyoming, but had to settle on the Nebraska campsite because everything was already booked.

“There was a lot of price gouging going on,” Heath said. “Hotels were wanting to charge $1,000 a night, and that was like a Super 8 hotel. Some campgrounds were wanting $600 a night.”

Arkansas cities and communities in the “path of totality” of the 2024 solar eclipse should begin preparing now for the influx of people wanting to watch the event, Heath said. “So a word to the wise … seven years may seem like a long way off, but you might want to start getting ready for that.”

A solar eclipse is the optical effect of the moon passing directly between the Earth and the sun.

Total solar eclipses are not that unusual; they occur every year or two or three somewhere on Earth, but often in places where few, if any, people witness them, like over an ocean or over the North or South Pole, Heath said.

This month’s eclipse is considered rare because the last time a solar eclipse could be seen just in the United States was 1,581 years ago in 436 A.D., Heath said.

“Of course, the United States didn’t even exist yet, but the entirety of the eclipse fell upon the soil of what people of the future now call ‘the USA,’” he said. “This won’t happen again until Jan. 25, 2316.

“This one is very special because it goes directly over the United States, nowhere else in the world,” Heath said. “I hate to use the word astronomical, but it’s pretty big.”

The last total eclipse visible over the U.S. was in 1979, but that one only crossed the northwest states before moving into Canada.

In the path of totality, the moon gradually masks the disk of the sun, throwing a shadow of complete darkness on the earth, Heath said. “The sun just kind of gradually fades out and it looks like the moon is taking a bite out of the sun.”

As the eclipse progresses, “the temperature starts to drop. And, of course, as the light fades away it will cause birds to start roosting and nocturnal insects are going to come out,” Heath said. Total darkness will last, on average, about two minutes in the path of totality.

While the total eclipse will not be visible in Arkansas this month, Heath said, most of the sun will be obscured and the effect will be readily apparent if the weather is good.

“Depending on where you are in the state, the timing of when the event is going to occur is going to be a little different,” he said. And less of the sun’s disk will be covered by the moon the farther one is from the path of totality.

For Arkansans, the moon will begin encroaching the sun at about 11:47 a.m. on Aug. 21, according to the NASA website. The midpoint of the eclipse, when the maximum coverage is reached, will occur between 1:18 p.m. to 1:20 p.m. in Arkansas. The eclipse will be complete by 2:46 p.m.

The path of totality for the 2024 eclipse, according to NASA, will be about 120 miles wide. It will cross from Mexico into Texas and continue into Maine and Canada, covering such cities as Dallas; Little Rock; Indianapolis; Cleveland; Erie, Pa.; Buffalo, N.Y.; and Burlington, Vt.  For more information visit nasa.gov or
UALR’s Night Sky at ualr.edu/tv/night-sky.

If you want to safely watch a solar eclipse — this month’s partial eclipse or the total eclipse that will be visible from Arkansas in 2024 — you must have special eyewear to protect your vision.

According to NASA’s eclipse website, there are just a few eclipse safety glasses or handheld viewers that have met the International Organization for Standardization safety standards for looking at the eclipse.

There are also ways to indirectly watch the Aug. 21 eclipse without specialized glasses, according to Heath.

“Nature also provides some interesting ways to observe the eclipse safely,” Heath said. “When the sun is filtered through the gaps in the leaves, the gaps act like a pinhole camera so it will project images of the eclipse … on the ground, the side of a light-colored house or car, something like that. You have all these hundreds of miniature eclipses going on and being projected through the gaps in the trees.”