Co-ops join together to keep the lights on

The aftermath of the catastrophic ice storm on Jan. 26-28, 2009, left power lines and trees down across northern Arkansas. Here, Fayetteville residents surveyed damage on foot as roads were impassable for a time. Photo Mitchell Johnson

Later this month, it will be 11 years since a catastrophic ice storm swept across northern Arkansas, coating trees and power lines with up to three inches of ice and leaving about 210,300 electric co-op members without power.

The Jan. 26-28, 2009, storm eclipsed the two devastating ice storms of December 2000 that paralyzed much of Arkansas, a feat many cooperative employees didn’t think possible. Although the 2000 storms affected a wider geographic area in Arkansas, more than twice as many cooperative members lost power in the 2009 storm than in either of the two 2000 storms. Monetary damage to the electric distribution systems far exceeded the $47 million in damage the co-ops sustained in 2000.

“In all of my years, I have never seen anything that compares to the damage this storm has caused,” Mel Coleman, president and CEO of North Arkansas Electric Cooperative based in Salem, said in an interview in the 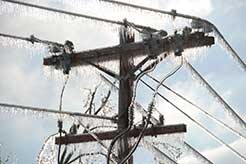 The January 2009 ice storm coated power lines and poles with up to three inches of ice in some areas of northern Arkansas. photo courtesy of North Arkansas Electric Cooperative

Mitchell Johnson, president and CEO of Ozarks Electric Cooperative, told reporters at a Feb. 2, 2009, news conference that the storm was the most devastating in the cooperative’s then nearly 70-year history. “We are rebuilding a system that took decades to build,” he said.

A key to the co-ops’ success in restoring power following those weather disasters was the support the electric co-ops across the state and nation provide each other. That support is part of the seven guiding principles of the cooperative business model, which state that cooperatives serve their members most effectively by working together. In addition to providing line crews to assist their sister co-ops in power restoration, Arkansas’ 17 electric distribution co-ops own a statewide organization, Little Rock-based Arkansas Electric Cooperatives, Inc. (AECI), which provides supplies and additional manpower to help the co-ops in restoration efforts, as well as day-to-day maintenance of the co-ops’ power grid.

“Having access to people and materials to keep that (electric service) reliability high is important,” said Jonathan Oliver, vice president of Utility Sales & Services for AECI. “And that’s why we are here.” 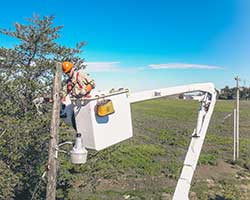 The Utility Sales Department of AECI operates warehouses with multimillion-dollar inventories of supplies needed to rebuild and repair/maintain electric distribution systems. Those supplies include such items as transformers, wire, fuselinks (used to protect transformers), automatic splices (used to quickly repair broken lines) and poles. The main warehouse is based in Little Rock and includes a state-of-the-art trucking operation that delivers material directly to co-op members and other customers, which include municipally owned utilities, as well as investor-owned utilities and contractors. In addition, AECI has four warehouses it operates for distribution co-ops in Missouri, Oklahoma and Arkansas.

“When the storm hits, we have enough inventory to get us through a couple of weeks or more, and then we will 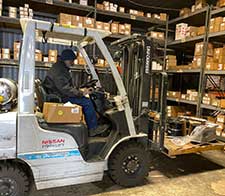 start getting shipments in,” Oliver said. “Our plan does not have everything you need in our store for the whole duration. It’s to get us started.”

As supplies are depleted, AECI replaces them through a “pipeline” of vendors that are reliable partners, Oliver added. 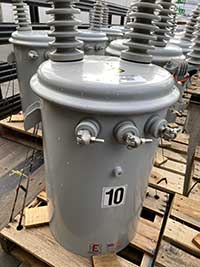 An ERMCO transformer is part of the extensive inventory at the AECI Little Rock warehouse. photo Sheila Yount

One of the Utility Sales Department’s most important suppliers is an AECI-owned subsidiary, the Electric Research and Manufacturing Cooperative (ERMCO), based in Dyersberg, Tennessee. Developed in the 1970s as a joint venture by AECI along with statewide electric co-op associations in Wisconsin and Kentucky, AECI became the sole owner of ERMCO in the 1970s. Today, ERMCO is one of the electric co-op industry’s greatest success stories. Specializing in single-phase transformers for pole mounts and pads, ERMCO also makes a full line of components, including circuit breakers, fuses, bushings, switches and more. 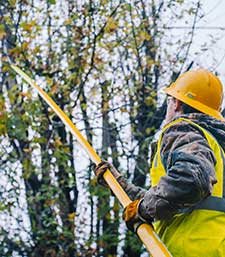 In 1966, AECI added construction services to support its member co-ops. The department builds electric distribution and transmission lines and substations. The department’s crews also move power lines and poles when roads are widened. In emergency situations following storms, the department provides crews and equipment to assist with clean-up efforts and repairs.

Safety is job one

Whether it be day-to-day operations or an emergency event following a storm, safety is the top priority for co-op 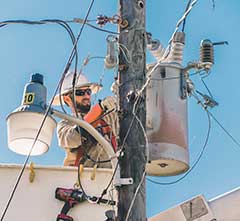 employees. One way their safety is ensured is by having reliable equipment for working in the field. Based in Little Rock, the High Voltage Test Lab staff inspects and tests that equipment. The equipment, which includes such items as gloves, hot sticks, jumper cables and more, is first tested visually by lab technicians. Next, it goes through specialized testing equipment. Once it passes inspection, the equipment is cleaned before being returned to lineworkers. In addition, AECI offers ongoing training for co-op lineworkers through its Corporate and Member Safety Department to ensure that workers keep safety at the top of their mind in what can be a very dangerous working environment.

In addition to helping keep the lights on year-round and after storms, AECI provides other services to the state’s electric co-ops that are important to the success of the co-op network. Created in 1941 and originally called the Arkansas State Electric Cooperative, Inc. (ASECI), the association was formed to help the co-ops handle political opposition to the rural electrification movement from investor-owned utilities. The association was the brainchild of Thomas B. Fitzhugh, a former chairman of the state Utilities Department. Starting in 1941, Fitzhugh led ASECI on a part-time basis as its only employee during World War II, a time when the rural electrification program slowed greatly as manpower and supplies were diverted to the war effort. In 1948, the ASECI board hired a full-time manager, Harry L. Oswald, who led the association on an aggressive campaign to promote rural electrification in Arkansas. A big part of that campaign was the Arkansas REA News, the predecessor to Arkansas Living, which ASECI began publishing in November 1946. 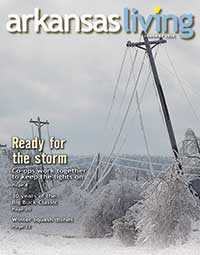 Those two functions remain vital today. The AECI Governmental Affairs Division monitors state and federal legislation that may affect the electric utility industry and co-ops, while AECI’s Corporate Communications Department and Arkansas Living help keep members informed with news about the co-ops. AECI’s Training Department provides ongoing education for co-op employees and board members on a variety of topics related to their jobs. These services help co-ops fulfill another of the seven guiding principles of the cooperative business model that calls for providing education and training for members, elected representatives, managers and employees so they can contribute effectively to the development of their cooperatives.

Whether it be storm restoration, energy news about the co-ops or a training program, AECI is ready to help support the 17 electric co-ops it serves. “What we’ve defined for our mission is to support our members’ success,” Oliver said. “And we do that in a lot of ways. We’re always there.”