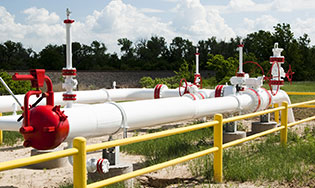 With record growth in natural gas production in the forecast, federal energy officials see prices for the fuel moderating in the coming months. And that’s good news, considering they also expect more electricity to be coming from natural gas this year and next.

In its Short-Term Energy Outlook issued Feb. 6, the Energy Information Administration (EIA) sees this month’s spot price at Louisiana’s Henry Hub averaging $3.34 per million British thermal units. But for the entire year, the forecast average falls to $3.20, and in 2019, EIA forecasts a $3.08 average.

You can credit that to what’s expected to be record production.

All of this comes as EIA predicts a steady increase in electricity from natural gas.

“EIA expects the share of U.S. total utility-scale electricity generation generated by natural gas-based power plants to rise from 32 percent in 2017 to 33 percent in 2018 and to 34 percent in 2019,” the report said.

Meanwhile, motorists looking for relief at the gas station will have to wait a bit.

The report sees a gallon of regular gasoline averaging $2.61 this month, $2.69 in March, and $2.73 in April and May, before beginning a slow decline for the balance of the year. 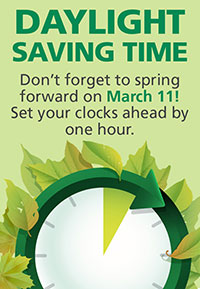 Mark your calendar to move your clocks up an hour on Sunday, March 11, as Daylight Saving Time (DST) begins at 2 a.m. on that date. DST, which is designed to add an extra hour of daylight in the evenings, will end at 2 a.m., Sunday, Nov. 4. U.S. Department of Transportation studies have shown that DST cuts the nation’s energy usage by about 1 percent per day because less power is needed for lighting and appliance use.

It’s no secret that Arkansas weather can be quite unpredictable at any time of the year. But as winter transitions

to spring during March, with the first day of spring on March 20, forecasting becomes an even greater challenge. Here are some examples of March weather historic events from the National Weather Service.

In the aftermath of the storm, about 20,000 electric co-op members were without power. Hardest hit were South Central Arkansas Electric Co-op based in Arkadelphia; First Electric Cooperative’s Benton District; and Farmers Electric Co-op in Newport.

For many years, people were told to open windows if a tornado was near, but that is no longer advised. It was believed that rapidly falling pressure would cause homes and businesses to expand and explode. But research has shown that powerful rotating winds, not pressure drops, cause the most damage. To open your windows would allow the wind and flying debris to flow more freely through a home and cause damage and injuries.