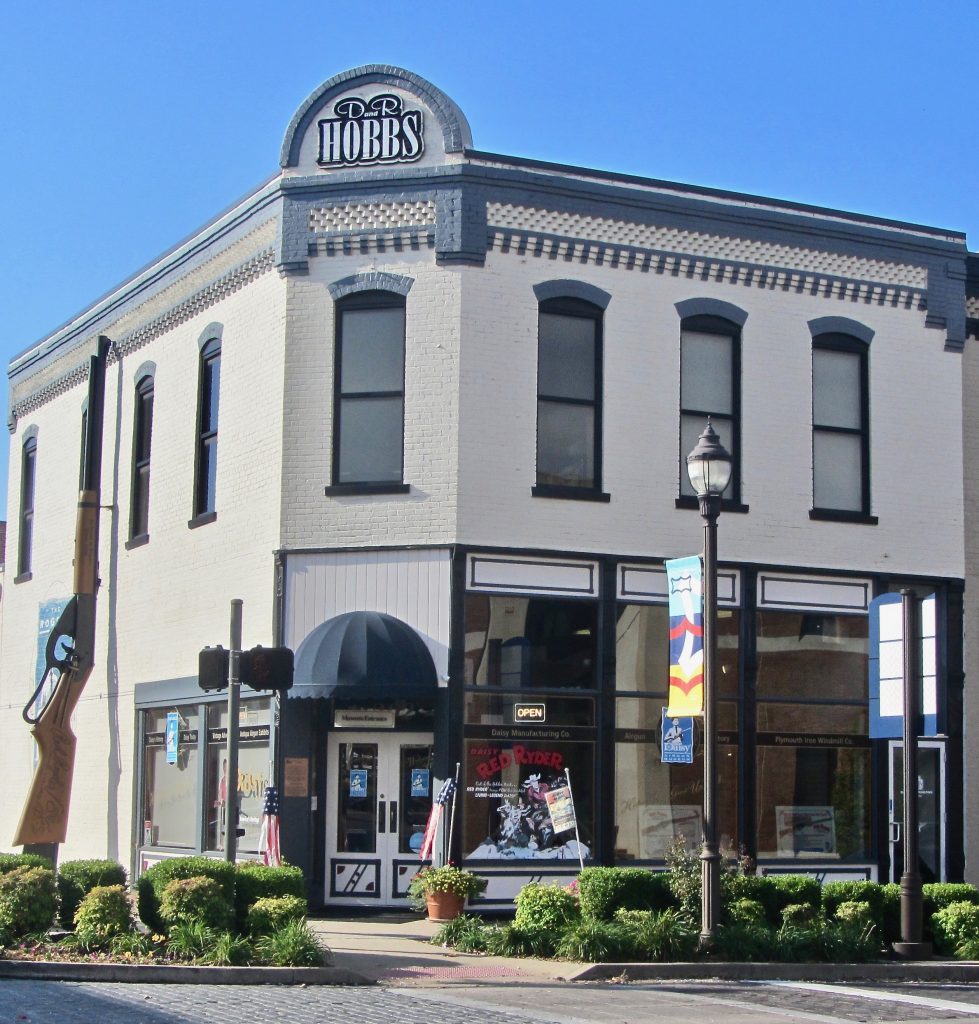 The Daisy Airgun Museum, at 202 W. Walnut St. in downtown Rogers, is open to visitors every day of the week but Sunday.

An air rifle like the one that starred in the perennially popular movie A Christmas Story is displayed in one of the most popular exhibits at the Daisy Airgun Museum in Rogers.

The Daisy Red Ryder model can be seen in a layout focused on the beloved comedy, watched again and again by millions of fans from one holiday season to the next. But there’s a surprising fact about that iconic model, as explained by Joe Murfin, the nonprofit museum’s chairman of the board. 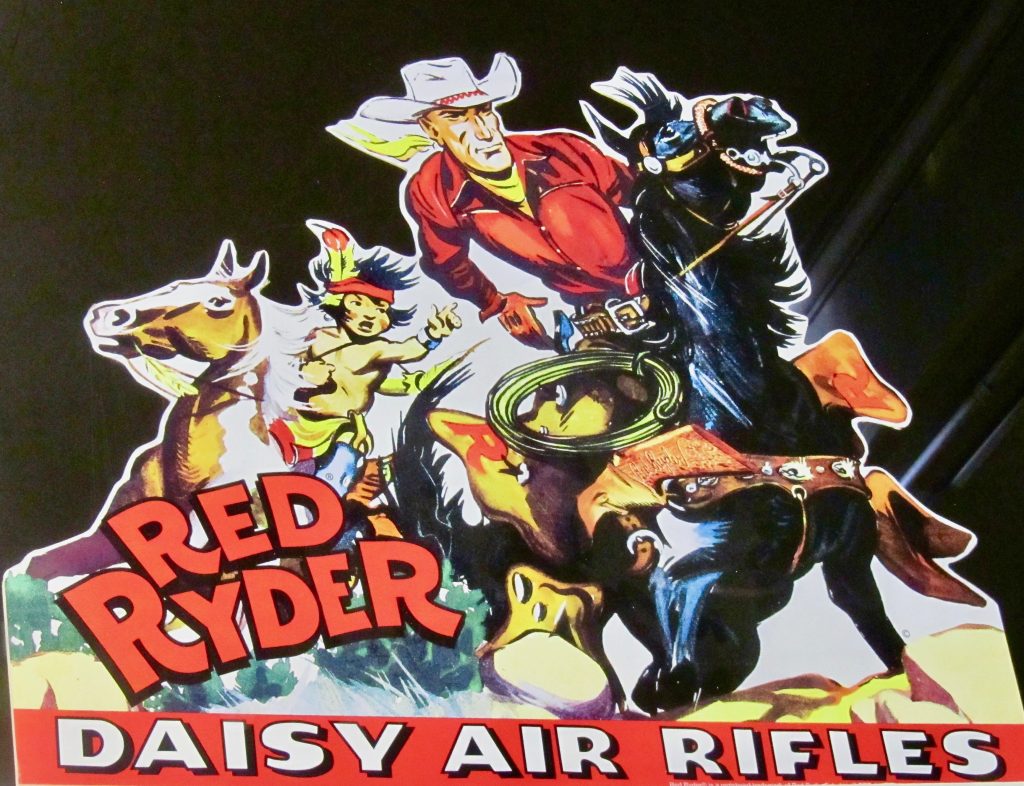 Red Ryder, created as a comic-strip character in 1938, was the basis for a wide range of Daisy marketing. That included Red Ryder Daisy Air Rifles.

“What’s significant about the movie is that the gun for which Ralphie so ardently lobbies his parents and Santa hadn’t actually existed,” Murfin says.

The 1983 MGM film that became a surprise smash hit was based on a blend of Jean Shepherd’s published stories spun from his Midwest boyhood. In the screenplay, set around 1940, 9-year-old Ralphie Parker asks Santa Claus for “an official Red Ryder Carbine-Action 200-Shot Range Model Air Rifle with a compass in the stock and this thing which tells time.” 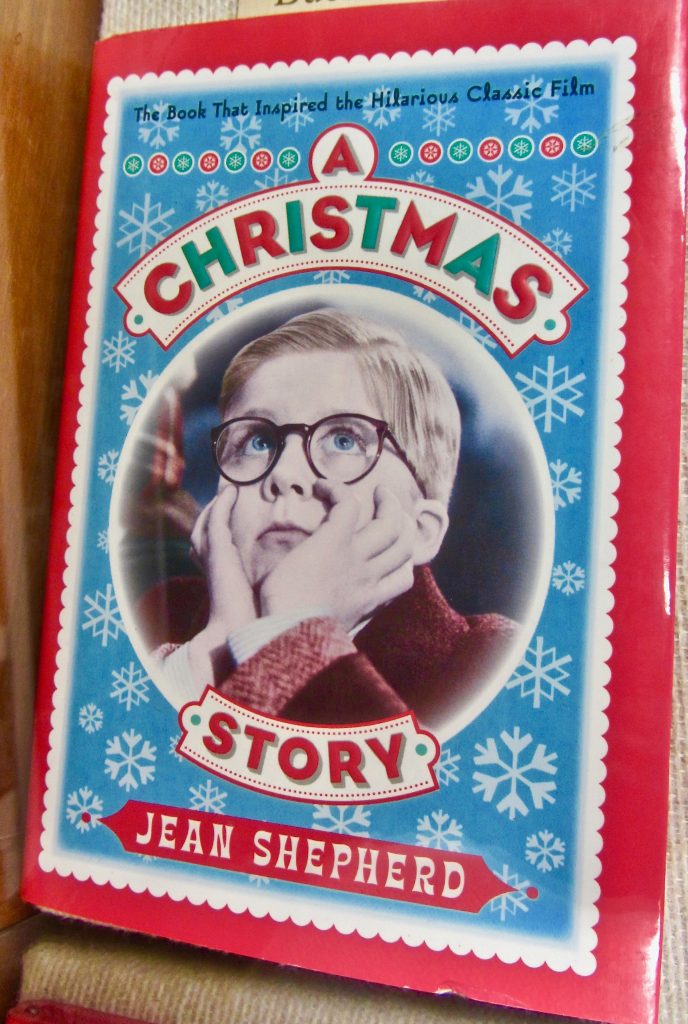 The problem, as Murfin relates, is that the Daisy Red Ryder sold at the time did not feature a compass or sundial in the stock.

The company’s gun with those distinctive features was the earlier Buck Jones model, named for a less famous movie cowboy of the 1930s. And it was a pump gun, not a lever-action gun like the Red Ryder.

But the film’s producers wouldn’t change the script to suit the facts. So, according to Murfin, “Daisy agreed to inset a compass in the stock and silkscreen a sundial on the stock of three Red Ryder guns for the movie.”

The museum houses a replica of that customized hybrid in its collection of A Christmas Story memorabilia — the 13th of 29 exhibit areas chronicling the company’s 13-plus decades. The rifle is showcased next to an antique tabletop radio, circa 1940, rigged with a small video screen. Showing in rotation are snippets from the movie, which several surveys have ranked as the best Christmas film ever.

Among the replayed scenes, a schoolmate takes a dare and gets his tongue stuck to an ice-cold flagpole. Ralphie gets his mouth washed out with Lifebuoy soap by his mom for having used a dirty word. Ralphie gets scared by a nasty department-store Santa and his elf. Ralphie breaks his glasses on Christmas morning after they’re knocked off by a BB fired from his new Red Ryder, nearly fulfilling the adults’ oft-repeated warning, “You’ll shoot your eye out!”

The display “always brings a smile to tourists’ faces, because a large majority of them have seen the movie,” Murfin says. “There’s a little bit of Ralphie in each of us.” And many visiting Arkansans, particularly from small towns and rural areas, have likely owned or still own a Daisy airgun. 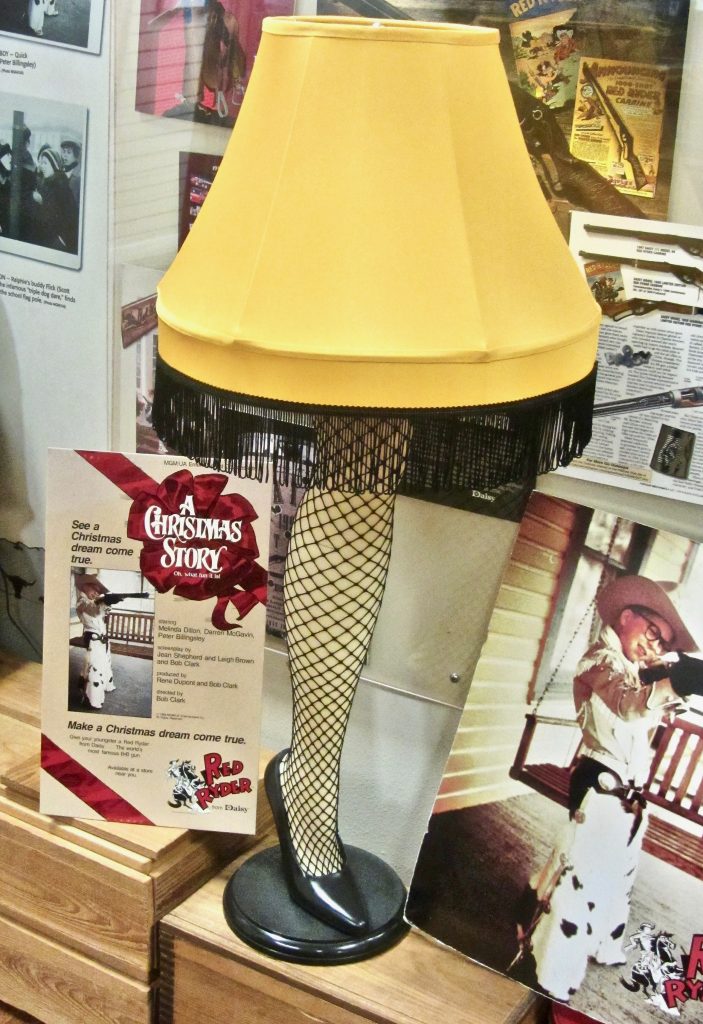 A replica of the leg lamp with fishnet stockings from A Christmas Story is displayed at the Daisy Airgun Museum.

Other alcove items include the garish woman’s-leg lamp treasured by Ralphie’s father (The Old Man) and its crate labeled “Fragile” (pronounced “Fra-jee-lay” by The Old Man). There’s a Red Ryder poster headlined, “I’ll Help You Get a Daisy for Christmas,” and black-and-white photos from the set, including lead actors Peter Billingsley, Darren McGavin, Melinda Dillon and Ian Petrella.

Murfin points out that other museum exhibits enjoy steady popularity with visitors, who can listen to an audio wand as they tour. An opening display explains how the firm’s struggling business of building windmills in Michigan turned to making airguns by the end of the 1880s.

“Visitors are intrigued by the exhibit related to Daisy’s support of the World War II effort,” Murfin says. “It explains that our company, and every other firm that made products needing steel, were allowed to use it during the war only for military purposes. It includes examples of wooden guns we made in 1941-45.”

Among Red Ryder merchandise were popular toys modeled on the semi-trailers that plied the nation’s highways.

A quirky display relates to Apollo 14 astronaut Alan Shepard, who took a six-iron to play golf on the moon. The two golf balls he hit on the airless lunar surface bear the Daisy logo, because the company was owned in 1971 by a larger corporation that also sold golf balls. The Daisy connection was kept quiet back then because NASA barred private companies from gaining publicity through the space program.

The sign for another area reads: “Daisy Is Committed to Shooting Education.” The display asserts that “more young people have learned how to shoot safely with a Daisy BB gun than any other brand.” It notes that airgun targeting first became an Olympic sport in 1984 — and that members of the USA Olympic Shooting Team “will often tell us that they got their start shooting on a Daisy 5-meter BB-gun team.”

In 1958, the Daisy company moved its operations to Rogers because labor problems impacted its work in Michigan. After a large facility was built at 2111 S. Eighth St., the entire plant was relocated to Rogers, along with about 60 staff members and their families. At its peak, the Rogers plant had about 1,000 employees.

Daisy’s home office remained in Rogers in 1997 when the manufacturing process was moved to Neosho, Missouri. The museum opened in Rogers with a literal bang in March 2000. Arkansas first lady Janet Huckabee conducted the christening by firing an airgun to pop a balloon.

In 2007, the entire Daisy operation returned to Rogers, where the making of guns and other products continues, now at 400 W. Stribling Drive. In 2016, the company was bought by Gamo Outdoor USA, which later moved its headquarters to Rogers. 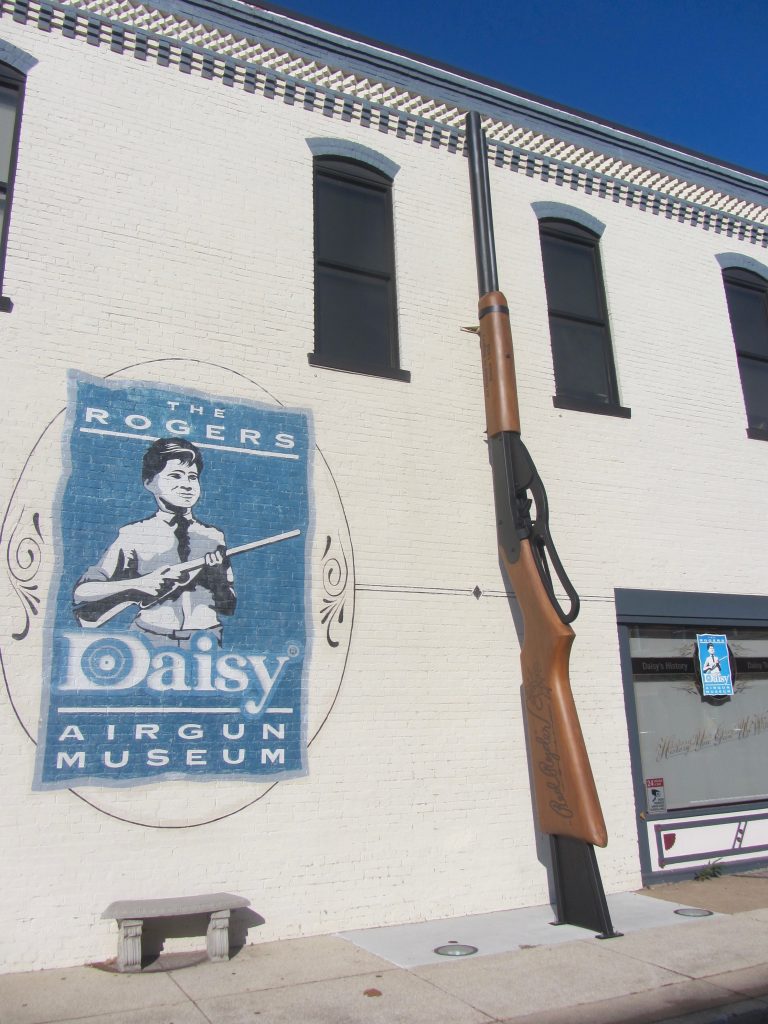 Towering outside the Daisy Airgun Museum is a display billed as “The World’s Largest Daisy BB Gun.”

Since opening 21 years ago, the museum has made occasional changes and additions. New this year is a rifle that would have flabbergasted Ralphie Parker. Standing on end outdoors, it is billed as “The World’s Largest Daisy BB Gun.” It towers for 25 feet, nearly to the roof of the two-story building.

COVID-19 precautions delayed installing the huge rifle until this January. Now, Murfin says, “Every time we see a tourist, a family, a Daisy gun collector, a group of foreign-exchange students or whoever is standing by it to have a photo taken, we know the rifle is doing its job.”

Only a slight stretch of imagination is needed to picture Ralphie and his family posing for a smartphone snapshot in front of that gargantuan gun, as eye-popping in its own way as the leg lamp with the fishnet hose. 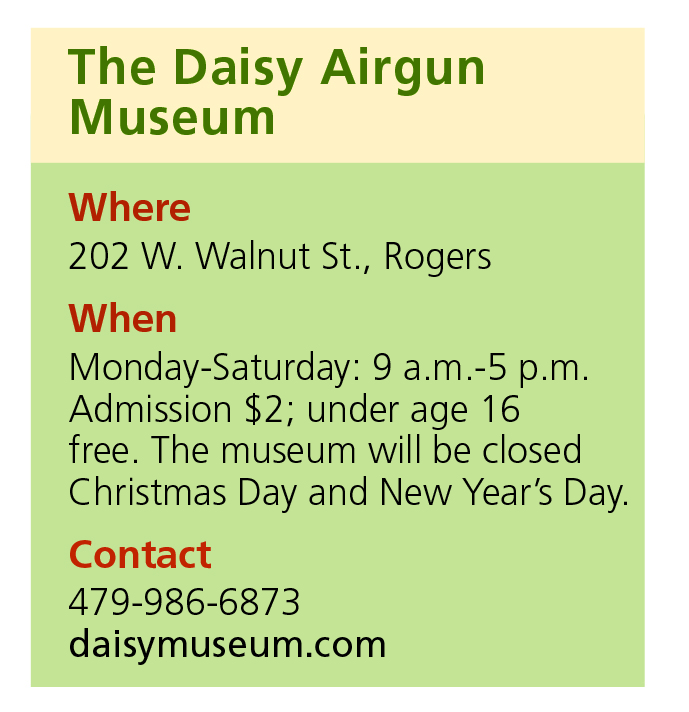