But edible solace was harder for Arkansans to come by due to the coronavirus pandemic.

For public safety, Gov. Asa Hutchinson on March 19 ordered the closure of all state restaurant dining rooms. No longer able to offer sit-down service, eateries and bars were left with two choices: shift to curbside/delivery service or shut down, at least temporarily.

Even some Arkansas Waffle House restaurants — known for never closing — closed, while others continued 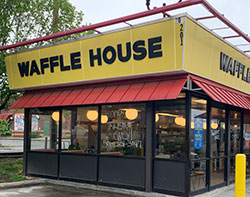 At the Skylark Café in Leslie, the Ellis family served to-go Mediterranean, Italian, Tex-Mex and barbecue family packs for a time, but announced on April 4 via Facebook, “It is time for us to close our doors and lay low for a while.”

Owner Joy Ellis explains the decision: “Honestly, for the last few weeks, we’ve been in a desperate race to survive. We’ve been working longer and harder than we were before, with less staff and a completely new set of rules, and we are tired. We’ve worked to get to a stopping point where we and our staff can be OK without Skylark Cafe Inc. for a while, and we’ve reached that point. We have two kids that want us to stay home, and we don’t feel OK asking other people to take care of them during this crisis.

“It’s time to learn to rest and not quit.”

The family behind Conway’s WunderHaus came to a similar conclusion.

Says co-owner Jacqueline Smith, “What we’ll do is take some breaths and be with our families and self-quarantine. … We’re all going to work on our respective farms.”

While the owners of WunderHaus, which started life as a food truck, know all about takeout cuisine, they decided to temporarily close April 11 due to safety concerns.

“It’s going to get worse before it gets better, obviously, and we would not be able to safely serve our guests and our friends — because people have become very much part of our family,” Smith says. “And we would not feel comfortable serving them at a time when exposure is extremely high and there is a chance we could be transmitting this thing to them without even knowing that we ourselves have it.

“That is a dangerous game to play.”

For example, the Chopping Block Steakhouse, a sit-down restaurant in Mena, transformed one of its front windows into a to-go window.

Says Indy Lewis, who runs the front desk and grill, “We are a steak restaurant, and we mainly do dine-in, so we have had to convert to takeout. It’s been alright, but it’s been a little hard, of course.”

Will they keep the window when business normalizes?

“It all depends,” Lewis says. “We might. But we are definitely ready to be able to open up our doors and let all of our customers back into our restaurant.”

A window also has made the adjustment smoother for Feltner’s Whatta-Burger in Russellville.

Manager Jacob Coffman says, “We opened back in 1967 just as a walk-up window, and we never really got rid of that. We’ve got a lobby now that seats about 80 people, and what we did was, when the governor decided we were going to close all of our lobbies down, we transitioned pretty quickly into going back to just the walk-up window.”

And customers have responded.

“We’ve not really seen a decrease in our normal day-to-day business,” Coffman says. “We’re getting a lot of 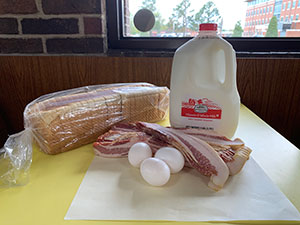 With its dining room closed, Feltner’s Whatta-Burger in Russelville has been selling burger and grocery boxes to customers.

support from the community. People are coming out; they’re making lines out in our parking lot all the time. People are just waiting to get a hamburger out there.”

Not just hamburgers, but other items, too.

“We’ve worked with a lot of our suppliers,” Coffman says. “The first couple weeks, when everything was really

bad, we tried to put together a box that was a good value at a good price. We did milk, bread, eggs, bacon and pinto beans, and we sold those as a bulk unit to people who were having trouble getting those in the stores. We also are doing pre-made hamburger boxes with raw hamburger patties, buns, all the vegetables, cheese and a pound of french fries for every four burgers. And we’ve sold a ton of those.”

Other Arkansas restaurants became mini grocery stores as well. In addition to creating a menu of family packs, 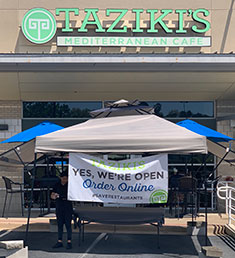 the Purple Cow, with locations in Little Rock, North Little Rock, Conway and Hot Springs, sold everything from heads of lettuce and tomatoes to bread and milk.

Three Chicks Feed, Seed and Café in Texarkana, which sells a little bit of everything anyway, sold harder-to-find

supplies like Nitrile gloves in addition to its regular inventory of chicken salad and livestock feed.

Coffman says that while Whatta-Burger was able to provide for customers’ food needs, there’s one item he hasn’t been able to get his hands on: “I’ve been hounding all my suppliers trying to find toilet paper, and nobody’s got any!”

To help offset losses, an emergency rule was put into effect regarding the sale of alcoholic beverages. The 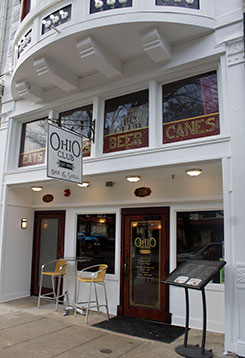 While a temporary rule allowed restaurants to sell sealed beer and wine for off-site consumption, some establishments, like the Ohio Club in Hot Springs, closed temporarily.

temporary rule gave restaurants and microbreweries the ability to sell and deliver sealed, canned or bottled beer and wine for off-site consumption with the purchase of food. And distilleries, small breweries and small farm wineries were permitted to deliver products directly to consumers.

Still, the effort couldn’t save everyone. For example, Ozark Beer Company in Rogers made headlines for laying off 15 employees in March.

Arkansas’ oldest bar, The Ohio Club — a Hot Springs fixture since 1905 that survived, among other things, Prohibition and two world wars — decided to close temporarily.

But rest assured, as the Central Avenue establishment states via its Facebook page, “The Ohio Club made it through the pandemic of 1918 and we’ll make it through this one.”

At Fossil Cove Brewing Co. in Fayetteville, manager Andrew Blann says, “It’s definitely different for us. We had to switch to a 100% to-go model, so we’ve been selling a lot of six-packs, four-packs, crowlers and growlers. And we’re selling to a lot of liquor stores, grocery stores — anywhere that can still sell craft beer to go. Those are our only customers now, as far as not being able to have anyone come and visit Fossil Cove for a pint and hang out on our patio. And a lot of the restaurant accounts that we were servicing can’t buy beer.”

The ability to deliver beer directly to customers has helped.

“It’s keeping us busy, and it’s keeping our distribution guys busy,” Blann says. “People can call the tasting room and place an order. We’re going around town, delivering it … pizza-shop style. We’ve got our delivery vans that we use for distribution; we’ve got a bright purple van driving around Northwest Arkansas every day delivering beer.”

And people are taking advantage of that.

Blann says with a laugh, “In times like these, everyone could use a cold beer. So, we’re definitely here to help with that.”