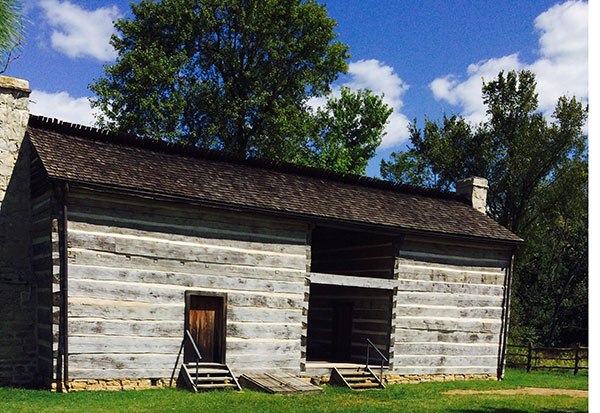 Along the Eleven Point River in northeastern Arkansas are two of the state’s oldest log structures — the small Rice-Upshaw House and the two-story dogtrot known as the William Looney Tavern rest on their original settings in the remote countryside near the Dalton community, Randolph County.

The two structures, named in honor of Reuben Rice and William Looney, the pioneering individuals who built them during Arkansas’ Territorial era, have been restored by Black River Technical College (BRTC) of Pocahontas.  The Rice-Upshaw House and the William Looney Tavern today attract individuals, school groups and tourists from around the state and region who come to see the rare examples of log structures and to hear the story of Arkansas’ early settlement. 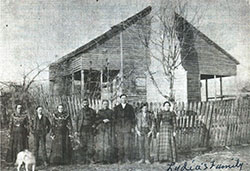 BRTC staff first became aware of the structures as a result of a research project assessing surviving log structures of the state’s territorial period. The study, funded in part by Department of Arkansas Heritage and Arkansas Humanities Council, confirmed through dendrochronology (tree-ring dating) that the Rice-Upshaw House was built around 1828 and the Looney Tavern was built around 1833, making them among the state’s oldest extant structures.

They are unique examples of folk architecture and early log-building traditions. Both had been sheathed in outer modern fabric, layers of siding and other materials over the years, which brought a measure of protection to the old logs.  But both structures had been vacant for more than 30 years; deterioration was widespread, and in each instance, immediate stabilization was imperative if the houses were ever to be restored.

The structures, now listed on the National Register of Historic Places, were donated to BRTC by Jack and Christina French and the Jean Upshaw family, descendants of the families who built them, with the stipulation that the college secure funding for restoration and use the projects for education. Restoration work was funded by a series of grants from the Arkansas Natural Resources Council. 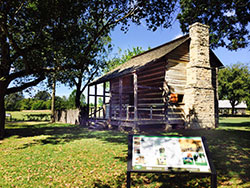 The project took 10 years and included not only the physical restoration of the structures, but also extensive historical, archeological and architectural research. The program, known as “Project Reach (Researching Early Arkansas Cultural Heritage),” became a lab setting for students in writing, art, music, history and even science classes.

Interpretive signage introduces guests to what was once Rice’s trade center offering blacksmithing, shoe-making, stock raising, distilling, and weaving, as well as agricultural pursuits. Today visitors may practice re-stringing a rope bed with a replica of a 19th-century rope bed formerly owned by the Rice family descendants.

Looney, a stockman and distiller, operated a rural tavern, or inn, for travelers. A recent acquisition to this site are a large hand-crafted table and benches in the tradition of the period.

The sites are open for guided tours from 9 a.m. to noon on the second Saturday of the month and each Tuesday from 9 a.m. to 3 p.m. from April through October. Groups should schedule tours by appointment. Visitors may take a self-guided tour of the grounds at the Rice-Upshaw site daily, year-round, but visitors who wish to tour the William Looney Tavern site must link up with tour guide at the Rice-Upshaw site (Arkansas 93 near Dalton) to be accompanied to the William Looney Tavern, which is not accessible to unaccompanied visitors. From downtown Pocahontas, take Arkansas 90 west toward Ravenden Springs, then go approximately 11 miles. At the intersection of Arkansas 90 and Arkansas 93, turn right, and proceed approximately five miles to the Rice-Upshaw House on the left.

For more information, contact the BRTC Office of Institutional Advancement at 870-248-4000, ext. 4189 or email jessica.bailey@blackrivertech.edu or visit: reach.blackrivertech.org.