Visitors to the Mid-America Science Museum are greeted on their way to the entrance by a fearsome creature from the Jurassic era, more than 145 million years ago.

It’s a lifelike, but not life-sized, model of a Tyrannosaurs Rex, the alpha predator among dinosaurs. The creature is scary enough to frighten small children with its recorded roar.

Inside the lively museum on a recent Saturday, dozens of youngsters, along with parents and other grown-ups,

are having a jolly time. They’re tinkering with playful hands-on exhibits that demonstrate scientific facts and principles.

Some of them will already have walked the Oaklawn Foundation DinoTrek, following a paved one-mile path through wooded terrain past more models of a dozen dinosaur species from the Jurassic, Triassic and Cretaceous periods. More roars ensue, even if nobody knows what noises dinosaurs actually made.

Since the DinoTrek opened in May of 2018, says museum Executive Director Diane LaFollette, “We have experienced a significant increase in attendance. People drive from all over the region to see the dinosaurs. Often when they walk into the museum, the first question they ask is, ‘Where are the dinosaurs?’

“Young children wear their favorite dinosaur T-shirt or carry a dinosaur plush toy when they come in with their parents. Because of youngsters’ fascination with dinosaurs, it’s a great way to introduce them to science.”

Blending education and pleasure
is the museum’s modus operandi, reflected in LaFollette’s advice to first-time visitors on how to get the most out of their experience.

“The galleries are designed to promote ‘discovery learning,’ in which learners discover facts and relationships 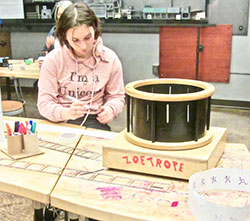 Making a Zoetrope cartoon movie is one possibility in the Tinkering Studio.

for themselves,” she says. “When you come in, we intend that you will be inspired to go where your interests take you. From the moment you walk into the lobby, you have many options to begin experimenting and investigating. If you need some encouragement, our staff is always there to help you on your journey of discovery.”

After a major 2015 expansion and renovation, fueled mainly by a $7.8 million grant from the Donald W. Reynolds Foundation, the museum boasts more than 100 interactive exhibits in its 65,000 square feet of indoor space plus surrounding woods.

Among those numerous exhibits, LaFollette says, “The ones visitors most seem to gravitate to and remember are the Two-Story Water Feature, the Underground Cave, the Giant Block Pit, the Keva Planks, the activities in the Alliance Rubber Company Tinkering Studio, the movies in the Oaklawn Foundation Digital Dome Theater and the Bob Wheeler Science Sidewalk.”

On this recent day, the Tinkering Studio is bustling with activity that the museum’s website describes as “often messy in a good way” and “supporting the motto that innovation is possible only through trial and error.”

In the Marvelous Motion Gallery, visitors of various ages explore principles of motion as they toy with exhibits like the Sand Pendulum, the Vertical Wave Machine, the Bicycle Wheel Loopy Lasso and the perpetually spinning Turntable.

Audiences in the Oaklawn Foundation Digital Dome Theatre enjoy a show that explores the heavens in the 50-seat planetarium. In the Tesla Theatre, the world’s most powerful Tesla coil amazes visitors with its high-energy light show.

Outside, the innovative Science Sidewalk — perched 40 feet above the ground and stretching 140 feet  — is 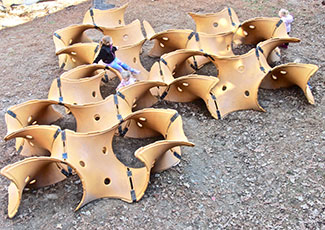 Children enjoy playing on an elaborate construction outside the museum.

In the fall of 2018, the museum held a successful bond election to fund an 8,750-foot addition costing $1.5 million. Scheduled for completion in May, it will house temporary traveling exhibits and large educational programs. The first show, still to be fully announced, will come from Australia and feature more than 30 interactive components.

Like most of the museum’s permanent exhibits, it will be designed “for children of all ages,” LaFollette says. She regularly sees adults “crawling through the 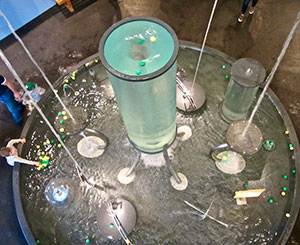 Underground Cave or playing in the Giant Block Pit with their kids or bouncing on the net bowl of the Science Sidewalk or splashing in the water of our Two-Story Water Feature.”

LaFollette takes extra pride in comments from out-of-state visitors who “are surprised to find such a gem in Arkansas, with the incredible architecture, the beautiful surroundings and the inquiry-based exhibits and programs. They often say that they could spend the whole day here.”

Admission is $8-$10. Additional charges are $3 for the Tesla Show and the Oaklawn Foundation Digital Dome Theatre.