This summer Turpentine Creek is roaring back to life. The acclaimed big cat and exotic animal rescue a few miles south of Eureka Springs went into a sort of pandemic-caused hibernation for about two months, closing to the public for the safety of the cats, employees and public as animal care staff quarantined on site. June 1 marked the reopening of the park and its luxury safari-themed lodging, with a few modifications to keep the experience as safe as it is enjoyable.

A different kind of tiger mask 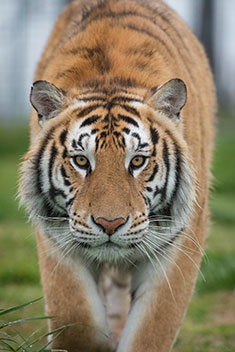 “We learned through our friends at the Bronx Zoo in April that felines can catch this coronavirus, too,” says Tanya Smith, president of the nonprofit Turpentine Creek Wildlife Refuge. (In April, the Bronx Zoo announced a tiger had contracted COVID-19 from a zookeeper and transmitted the virus to a number of other big cats.) “We’d hate for staff or someone in the public to get the virus here or transmit it to the cats.”
For that reason, even though the 460-acre ranch is an outdoor experience, TCWR is requiring visitors over age 3 to wear masks while on the grounds. In a recent Facebook post the organization clarifies: “We understand that small children may not want to wear masks; if you can’t keep a mask on your 3-year-old, we will not make you leave. Please just do your best and understand we are only taking these measures to protect our animal residents from contracting COVID-19. If tigers could wear masks, it would be much easier.”

The renowned exotic animal refuge has grown and flourished in recent years, having its best months on record in January and February. Then the pandemic shut the world down. Financial survival has been the biggest challenge yet, Smith says. But the organization is committed to staying in operation and doing what it does best: rescuing animals and giving them a permanent home where, for the first time in their hard lives, the animals’ needs come first.

The most recent rescues are two white tigers, Remington and Luna, who TCWR finally brought home in January 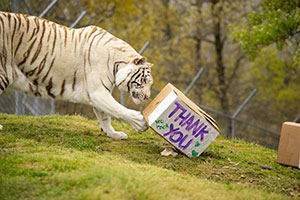 Luna plays with a painted box thanking donors for their continued support during the months the refuge was closed during the pandemic. photo courtesy of Turpentine Creek Wildlife Refuge

after the duo had spent three years in legal limbo. Animal curator Emily McCormack explains that because of abuse and unsafe living conditions, a court had ordered their previous owner to surrender the tigers to Turpentine Creek in 2016, yet for three years, the owner devised ways to keep from complying with the court order.

Luna and Remington spent their early lives being forced to swim with people — far past the cats’ point of exhaustion — for money. McCormack says tiger swimming, along with cub-petting, is a popular and lucrative practice that the general public does not realize causes irreparable harm to the animals. Most of the animals rescued by TCWR have lasting health problems from inbreeding, malnutrition, confined conditions and over-handling when their bones were growing. That’s where the other part of TCWR’s 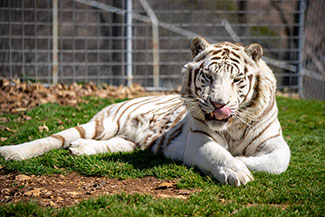 Remington and Luna were rescued in January from a private owner in Florida. Staff say Remington is particularly enthusiastic about daily feedings and treats. courtesy of Turpentine Creek Wildlife Refuge

“We’ve been able to add an education department on our staff, which is, along with the rescues, the most important thing we do,” McCormack says.  “We have to help people understand the dangers of private exotic animal ownership to the creatures and to the public, so that someday the exotic animal trade comes to an end. We’d love for there to be no need for our rescue to exist.”

Today Remington and Luna — along with close to 100 other big cats and exotic animals at Turpentine Creek — can live out their lives in comfort, in spacious enclosures where the animals have room to relax, prowl and play.

With one key exception, Smith considers the wildly popular Netflix docuseries, Tiger King: Murder, Mayhem and Madness, overall a setback for TCWR’s mission. The series, which became a hit in the early days of pandemic stay-at-home orders across the country, mostly showcases the types of for-profit zoos that perpetuate the overbred tiger problem TCWR works to solve. Smith says thousands more tigers are bred for profit in the United States than exist in the wild, and few are owned by people with the skills, expertise and resources to care for them properly. Endangered species overbred at these facilities end up illegally sold or traded to owners who cannot provide or sustain adequate care. The problem with the series, Smith says, is that responsible animal care was de-emphasized to amplify the drama of the humans involved.

She says that too many people who saw the employees playing with the animals in the cages and kids holding cubs and being cuddly now want their own pet tiger, or at least to visit places where they can have similar experiences. “It’s frustrating that after more than 20 years of doing this work to highlight that these are apex predators, not pets, it only takes one show to set us back.”

At Turpentine Creek, humans never enter the enclosures or even touch an animal unless it first has been tranquilized for veterinary care. “When a big cat injures a person, the cat usually ends up euthanized,” Smith says. “Keeping predators and people separated protects both.”

Another big difference with the zoos featured in the show and TCWR is the expertise of the employees: Besides hiring staff highly experienced in their fields, Turpentine Creek has an extremely competitive internship program that draws zoologists and biologists around the world to the north Arkansas facility.

One thing that Smith says has been a huge positive from the show, is that it drew more attention to the Big Cat Public Safety Act (H.R. 1380 / S. 2561), federal legislation that TCWR and other members of the Big Cat Sanctuary Alliance for years have been working to get passed. The legislation would require big cat owners to be licensed and regulated by the U.S. Department of Agriculture and would restrict direct contact between big cats and the public.

Thankful for visitors, past and future

While closed to the public, TCWR hosted live videos twice a day via social media to keep sharing the animals 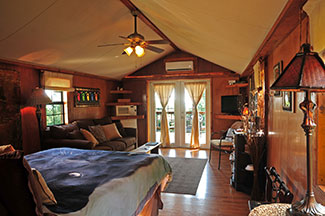 with their fans. But with zero revenue from admission, tours and gift shop sales, Smith says the nonprofit’s revenue is down more than 35%. A federal Paycheck Protection Program loan has helped, and Tyson Foods Inc. has continued donating enough chicken to keep the carnivores fed (TCWR purchases produce for its other animals, like bears), but it has been a struggle.

Years of hosting visitors who were transformed by their experiences has given Turpentine Creek a large base of passionate supporters. These people were crucial in helping the refuge continue caring for the animals during the pandemic. On “Giving Tuesday,” May 5, the rescue had set an initial fundraising goal of $28,000, auctioning via social media animal-created paw paintings and other items. By the end of the day, the fans had raised more than $50,000 for operating costs. “Our friends of Turpentine Creek have been so kind to us, even as everyone is working to stay afloat. We can’t thank them enough,” Smith says.

Now being able to share the park with the public again through tours and overnight stays is giving TCWR staff renewed hope they can keep up the level of care their rescued creatures need. Thanks to past and future visitors, these lucky animals will continue living happy, healthier lives among people who care deeply about their welfare and treat them with the royal respect they deserve.