It could happen to you. One moment you are at work, outdoors, in your vehicle or even at home, going about your normal activities. Then suddenly, an accident or violent crime causes a medical trauma that puts your life and future health in immediate danger. If you become one of the thousands of Arkansans who require trauma care each year, the state’s Arkansas Trauma Communications Center (ATCC) based in Little Rock could make all the difference in how well you recover.

Trauma survival rates are highly dependent upon fast access to medical attention. From the first responders, to the emergency medical personnel, to the hospital staff who receive and treat the patient, it takes everyone working together, rapidly and with precision, for a trauma victim to have a chance at survival.

Traumatic injury is the No. 1 cause of death for Arkansans ranging in age from 1 through 44. These rates are notably higher than national averages — particularly for motor vehicle accidents, due in part to a large network of rural roads. And some areas in the state are only served by one or two ambulances per county.

In 2008, Arkansas was cited by the American College of Emergency Physicians as having the worst emergency care system in the nation. Not only was it one of three states with no unifying trauma system, but it was also the only state without a hospital or other facility designated as a trauma center. All that has changed.

Faced with this serious public health challenge, in 2009 the Arkansas Legislature established the Trauma System Act, which dedicated up to $25 million per year to develop and implement, under the administration of the Arkansas Department of Health (ADH), a statewide system designed to help existing hospitals become designated trauma centers, to support and improve emergency medical response, and to facilitate communication among all of these stakeholders.

A culture of collaboration 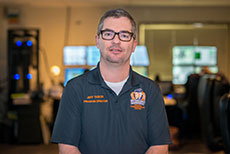 “Believe it or not, I think we were lucky to be the last in the country to develop a trauma system, because we as a state were able to pick and choose from the other 49 trauma systems of what did and didn’t work,” said Jeff Tabor, program director for the ATCC, also known as “Trauma Comm.”

Now, all participating emergency medical services receive grant funding through the trauma system. The ATCC supports the infrastructure of each service so any size EMS can transport trauma patients where they need to go.

The trauma system isn’t just for medical personnel and facilities; it also includes fire departments, law enforcement and the Arkansas Game and Fish Commission. This unprecedented level of interagency collaboration, communication and learning has built on an already strong sense of mutual support among emergency responders to create an extraordinary trauma safety network in a very short period of time.

“I think the trauma system has improved the collaborative effort that we see both in the rural communities and in the urban communities, probably more than I’ve seen in my 30 years that I’ve been involved in EMS,” Greg Brown said. “It has allowed us to leverage the expertise of each other to really improve patient care in the state.”

Before the implementation of the ATCC, it was standard practice for EMS transportation to take patients to the 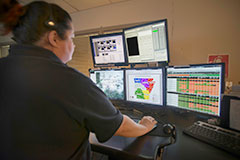 closest hospital, regardless of whether that hospital was actually the most appropriate one to handle their injuries. For patients who urgently needed a higher level of care, this practice cost valuable time and negatively impacted outcomes.

MEMS was contracted by the ADH to house the ATCC, in part because it was already using a custom-designed live dashboard for its own call center. The dashboard tracks 16 different levels of trauma care to get the right patient to the right place at the right time, said MEMS Executive Director Jon Swanson. “We just expanded it statewide.”

Enabled by the Arkansas Wireless Information Network, a state-of-the-art radio system installed by the ADH, now every EMS transport in the state, both air and ground, has crystal-clear communication through the ATCC to every designated trauma center. 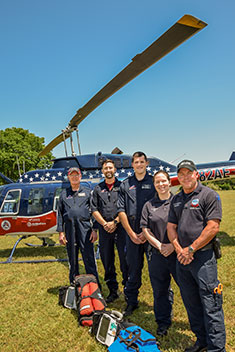 From left, Air Evac Lifeteam members Thomas Mitchell, Blakely Reeder and Joshua Davis pose with MEMS paramedics Katelyn Brown and Mike Ghidotti. The teams work together with others throughout the state to save Arkansans in medical emergencies. Photo by Sheila Yount

Swanson said one of its primary functions is to support the paramedic in the field when he or she is making the decision on whether to bypass the closest hospital. Prior to the creation of the ATCC, the risk of doing that was “huge,” Swanson said, adding that even if it was certain that the distant hospital had better general capability to treat a patient, it might not have the capacity to do so at that time. Prior to the creation of the ATCC, they faced the risk of being diverted when getting within radio range, a diversion that could put the patient in jeopardy.

If a trauma patient does end up at an inappropriate hospital, whether through EMS transport or other means, another crucial function of the ATCC is to coordinate and facilitate hospital-to-hospital transfer.

“And believe it or not, in Arkansas, over half of the patients who end up being transferred from hospital to hospital self-present,” Tabor said. “They get hurt very badly, and then they drive themselves, or their family drives them to the nearest, but maybe not the best, hospital for their injuries — without calling 911.”

Previously, it could take six or more hours for hospitals to plow through the steps necessary for this transfer to take place. Now, thanks to streamlined procedures and the ATCC’s assistance, it takes only seven minutes — a massive, lifesaving improvement.

Another benefit of “Trauma Comm” is that it can also help keep patients closer to home. Previous conventional wisdom was to take most acute trauma patients to Little Rock if a helicopter was available; now, if the ATCC dashboard indicates that a trauma center with an appropriate level of care is nearby, the patient goes there instead. This keeps metropolitan hospitals from becoming overloaded and the trauma patient closer to family.

“You heal better when you’re closer to home, when your family can come see you,” Tabor said. “Science proves that.”

Stop the bleeding, save a life 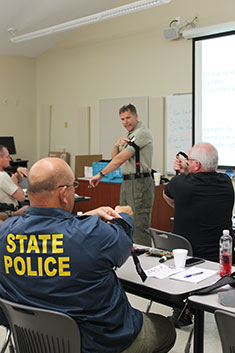 In addition to the communications center, Arkansas’ trauma system supports a wide variety of training, in part through the Arkansas Trauma Education and Research Foundation (ATERF), a non-profit designed to facilitate education for caregivers and emergency responders at all levels of medical skill.

ATERF’s Pre-Hospital Trauma Life Support class is a particularly useful bridge between emergency response units. It teaches basic training in tourniquet use, hemorrhage control and airway maintenance to the first responders who often arrive on a scene before EMS.

“So that car wreck on a rural road someplace, if a sheriff or state trooper is on scene and has the training and this equipment … someone who would have died from bleeding to death may make it now,” Tabor said.

Trauma can happen at any scale, which is why, with equipment through a grant from the trauma system, MEMS is volunteering instruction for a program called Law Enforcement First Responder (LEFR). Based on the Tactical Combat Casualty Care (TCCC) program, developed by the military in recent wars, the class provides advanced training in hemorrhage prevention in violent situations like active shooter scenarios, where victims often die before EMS personnel can come to their aid.

“We’ve trained 1,000 police officers in central Arkansas, along with the most recent class of Game and Fish Commission officers,” Swanson said, adding that they are now training all troopers statewide.

Trainees receive kits that include wound packing materials, a clotting agent, a chest seal and a Combat Application Tourniquet (CAT), designed to be used one-handed or two-handed, on legs or arms.

“The LEFR program is critical in that it provides training to law enforcement that allows them to medically assist the public and ourselves in a time of crisis,” said Cpl. Nick Brown of the Arkansas State Police. He sees these skills as a welcome extension of law enforcement’s commitment to protect and serve. 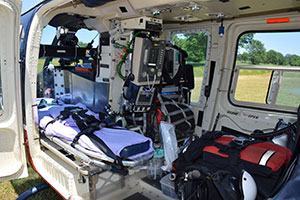 The tightly packed rescue craft holds only two nurses, one patient and the pilot. Photo by Sheila Yount

As these skills and equipment trickle down from the military to EMS and other agencies, the hope is that training can be extended to volunteers and other groups, and that civilians will also recognize the roles they can play as active participants in helping themselves, their families and others in a trauma situation.

With “Trauma Comm,” new training and equipment, Arkansas’ trauma system has come a long way in a short time.

“As a citizen of the state, I have never felt more confident in the care that would be provided to my family should a traumatic event happen,” Greg Brown said. “I know they would get the best possible care, far superior to what we’ve ever had in the past.”